What does the Catholic Church teach about nuclear weapons? - Catholic Courier 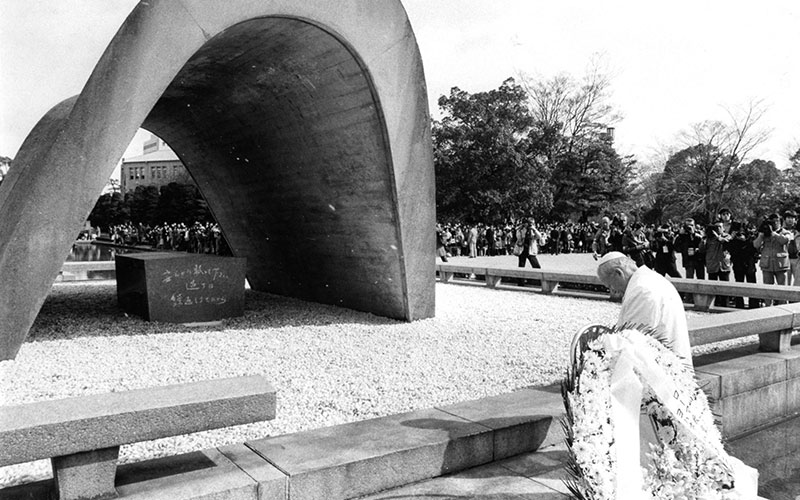 Then-Pope John Paul II prays in 1981 at a monument for the victims of the atomic bombing in Hiroshima, Japan. (CNS photo by L'Osservatore Romano)

Two popes have visited Hiroshima and Nagasaki to highlight the dangers of nuclear war and to mourn its victims. St. John Paul II made the first papal visit in 1981. Last November, Pope Francis made the second.

Since the 1945 bombings, popes have addressed and developed the teaching on nuclear weapons in consistent and increasingly urgent ways. The bishops of the United States have amplified and applied this teaching.

So what does the church teach about nuclear weapons? Its teaching is anchored in a concern to protect human life, an acknowledgement that peace is ultimately built on justice and a need to place strict moral limits on the use of force.

Any use of force must be proportional and discriminating. Force must not cause evils greater than what it aims to achieve. Force must discriminate between combatants and civilians.

In 1954, Pope Pius XII argued that “every possible effort must be made to avert (atomic warfare) through international agreement.”

He condemned “the pure and simple annihilation of all human life within the radius of action.” Pope Pius made the moral argument that the use of force must be limited to “self-defense” within “rigid limitations.”

St. John XXIII built upon this teaching in his 1963 encyclical letter, “Peace on Earth”: “The stockpiles of armaments which have been built up in various countries must be reduced all round and simultaneously by the parties concerned. Nuclear weapons must be banned.”

The Second Vatican Council was equally clear that “any act of war aimed indiscriminately at the destruction of entire cities … is a crime against God and man himself.” The council maintained that the arms race “is not a safe way to preserve a steady peace.”

Instead of eliminating the “causes of war,” the arms race aggravates them. “Extravagant sums” are spent on weapons and not on the underlying causes of conflict and the “multiple miseries” afflicting humanity.

St. Paul VI called “development, the new name for peace” in his 1967 encyclical letter, “On the Development of Peoples”: “For peace is not simply the absence of warfare, based on a precarious balance of power; it is fashioned by efforts directed day after day toward the establishment of … a more perfect form of justice.”

Pope Paul also inaugurated the annual World Day of Peace (Jan. 1) in 1968. In the first papal Peace Day message, he decried “frightful weapons of extermination” and the expenditure of “enormous financial” resources that “hinder(s) the development of so many other peoples.”

Addressing diplomats in 2003, St. John Paul II was emphatic. “‘NO TO WAR!’ War is not always inevitable. It is always a defeat for humanity.” He singled out “those who still place their trust in nuclear weapons.”

Pope Benedict XVI in 2006 starkly warned “those governments which count on nuclear arms as a means of ensuring the security of their countries.” He called their viewpoint “completely fallacious.” “In a nuclear war there would be no victors, only victims,” he added.

Pope Francis has frequently addressed the moral and life-threatening dangers of nuclear weapons. In a message to the 2014 Vienna Conference on the Humanitarian Impact of Nuclear Weapons, he wrote: “Nuclear deterrence and the threat of mutually assured destruction cannot be the basis for ‚Ä¶ peaceful coexistence among peoples and states.” He decried how expenditures “on nuclear weapons squanders the wealth of nations.”

The U.S. bishops have issued two pastoral letters on the issue, “The Challenge of Peace” (1983) and “The Harvest of Justice is Sown in Peace” (1993). In the first, they called upon the whole world to “say ‘no’ to nuclear conflict; ‘no’ to weapons of mass destruction; ‘no’ to an arms race which robs the poor and the vulnerable.”

In the second, they asserted: “The eventual elimination of nuclear weapons is more than a moral ideal; it should be a policy goal.”

What about the role of “nuclear deterrence”? In 1983, the U.S. bishops echoed the 1982 judgment of St. John Paul: “In current conditions ‘deterrence’ based on balance, certainly not as an end in itself but as a step on the way toward a progressive disarmament, may still be judged morally acceptable.”

Decades later, the church has reexamined “current conditions.” Nuclear deterrence has not led to “progressive disarmament” and a global nuclear ban. In fact, the nuclear powers are investing heavily in modernizing nuclear arsenals.

Given these conditions, in Hiroshima, Pope Francis declared: “The use of atomic energy for purposes of war is immoral, just as the possessing of nuclear weapons is immoral.” Earlier this year, the U.S. bishops’ International Justice and Peace Committee highlighted the efforts of Pope Francis and reaffirmed the longstanding “moral obligation to recommit to the work of ridding the world of nuclear weapons.”

The church’s teaching is clear and compelling. World leaders should work for a mutual, verifiable ban on nuclear weapons and instead invest in peace.

(Stephen M. Colecchi retired as director of the Office of International Justice and Peace of the U.S. Conference of Catholic Bishops in 2018. He currently serves as an independent consultant on Catholic social teaching and international issues of concern to the church.)