What is at stake when we vote? - Catholic Courier 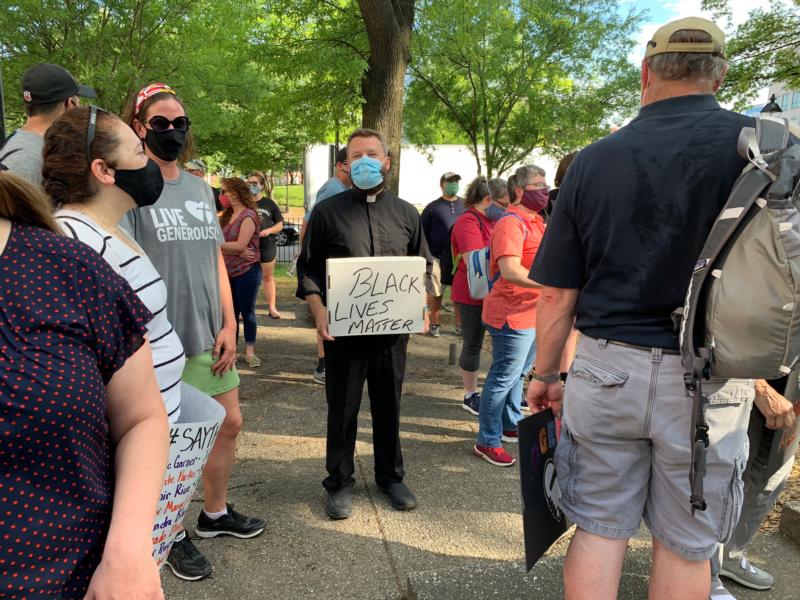 Father Joshua Laws, pastor of the Catholic Community of South Baltimore, holds a "Black Lives Matter" sign before the start of an interfaith prayer vigil in Baltimore June 3, 2020, to pray for justice and peace following the May 25 death of George Floyd. (CNS photo by Tim Swift/Catholic Review)

What is at stake when we vote? The question echoes ceaselessly at election time.

In preparing to vote I aim to recognize what is at stake, while realizing that an election is a beginning, not an end. Afterward, my concerns may well continue.

Catholic leaders encourage voters to prepare by listening, reading, consulting and considering how a particular election engages their values.

Regrettably, not everyone votes. Some think their vote won’t matter. Some conclude that the political realm is uninterested in them. Some say that their life allows no time to vote.

Would it help to think of voting as a means of putting faith into action and contributing to society’s well-being?

“We bring the richness of our faith to the public square,” the U.S. Catholic bishops affirm in a letter approved late in 2019 to introduce and supplement “Forming Consciences for Faithful Citizenship,” their document currently reissued one year before each U.S. presidential election.

Racism is an issue consuming American society at the time of my writing. “The wound of racism continues to fester,” the bishops’ letter plainly states.

The chairmen of seven U.S. Conference of Catholic Bishops committees said May 29, four days after 46-year-old George Floyd died during his arrest in Minneapolis, that they were “broken-hearted, sickened and outraged to watch another video of an African American man being killed before our very eyes.” Nationwide protests followed Floyd’s death.

Will racism appear in some straightforward manner on any upcoming ballot? Evaluating moral issues at election time often means looking beyond the surface and slogans of the candidates and policies placed before us.

But social and political issues typically have a moral dimension. Public policies, after all, impact human lives. The bishops’ letter mentioned many such issues. Abortion, the bishops reaffirmed, “remains our preeminent priority.” Abortion, they noted, “directly attacks life itself.”

Other issues also pose “serious threats to human life and dignity,” and cannot be ignored, said the bishops. They mentioned “racism, the environmental crisis, poverty and the death penalty.”

They called assistance for individuals and families struggling “to make ends meet” a “pressing” concern, and they accented the urgency of immigration reform.

Gun violence and xenophobia “affect human life and dignity,” the bishops observed. They also urged resistance to “the throwaway culture.”

Does preparing to vote, then, involve contemplating the positive or negative impacts an election could have on human life and dignity?

A sentence in the bishops’ letter that captured my attention reads, “Our approach to contemporary issues is first and foremost rooted in our identity as followers of Christ and as brothers and sisters to all who are made in God’s image.” The word “identity” made me think.

What kind of person do I intend to be? What are my deepest hopes for society? How does my faith factor into this? These are questions about identity, about who I am.

I don’t envision political ads that present the broad spectrum of issues facing voters as a call to work for “justice and healing” or to “affirm the dignity of the human person and the common good of all,” to borrow some words of the bishops.

Political ads inform us what candidates believe is at stake in an election. But a genuinely vital question remains: What do you or I conclude is at stake?