What is solidarity? - Catholic Courier 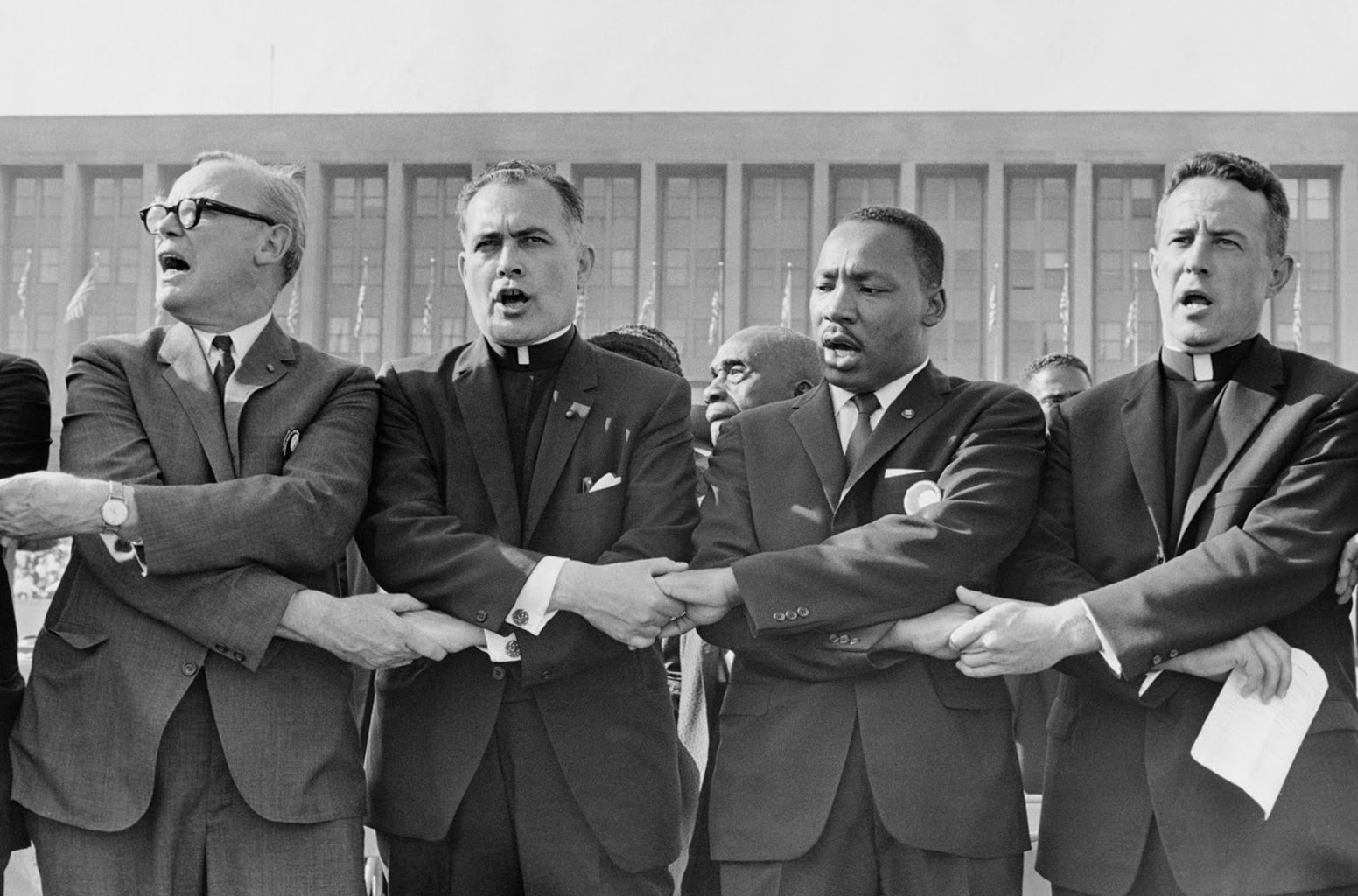 Holy Cross Father Theodore Hesburgh, second from left, joins hands with the Rev. Martin Luther King Jr., the Rev. Edgar Chandler and Msgr. Robert J. Hagarty of Chicago, far right, in 1964 at the Illinois Rally for Civil Rights in Chicago's Soldier Field. King once said, "We are caught in an inescapable network of mutuality, tied in a single garment of destiny. Whatever affects one directly, affects all indirectly." (CNS photo courtesy University of Notre Dame)

Solidarity: ‘We are all really responsible for all’

This is the sixth of a seven-part series on Catholic social teaching. This package focuses on solidarity.

If the pandemic has taught us anything, it is that we are far more interconnected than we previously imagined.

Beyond a feeling of compassion, the church teaches that solidarity is also a moral virtue that is cultivated through a “firm and persevering determination to commit oneself to the common good; that is to say, the good of all and of each individual,” as stated by St. John Paul II in “Sollicitudo Rei Socialis.”

Some things cannot be learned by reading books. Solidarity is learned primarily through social works of mercy that put faith into action for the sake of others. One way that ordinary people of faith can grow in the virtue of solidarity is to join a ministry or organization that is dedicated to improving the lives of those who Jesus called the “least brothers of mine.”

Take the Industrial Areas Foundation for instance. As one of the nation’s largest and oldest broad-based organizing networks, the IAF has its roots in the Catholic social tradition. By bringing together communities across the social, political and religious lines that usually divide, the IAF is effective at helping local faith and community-based organizations live out “their missions to achieve lasting change in the world.”

Catholic teaching shares the belief with many Christian and non-Christian religious traditions that social progress is measured by its impact on the poor. Since poor communities are often left out of the public conversations that impact their lives, faith communities can play a crucial role in making sure that society prioritizes the needs of the least among us.

In May 2020, the IAF affiliates of California mobilized their networks to do just that. Although undocumented residents are vital to California’s economy, pay taxes and have suffered disproportionately during the pandemic, early COVID relief legislation enacted by Congress prevented them from accessing critical economic aid.

Through the IAF’s organizing of an unprecedented statewide Zoom action that included 1,200 faith leaders, 10 bishops and several lawmakers, ordinary people of faith succeeded in persuading Gov. Gavin Newsom to include undocumented workers and their families in the state’s COVID relief measures.

The principle of solidarity challenges Christians to treat every neighbor, regardless of race, religion or nationality, as “another self.” Christ’s compassion is not limited to any particular group or country. Christians are those who choose to imitate Jesus by extending God’s love beyond the literal and figurative walls that divide the one global human family.

One organization that does this on the international level is Catholic Relief Services. As the official international relief and development agency of the Catholic community in the United States, CRS’ mission is to assist the poor and vulnerable around the world by promoting integral human development as well as serving Catholics in the United States as they “live their faith in solidarity with their brothers and sisters around the world.”

In 2019, CRS began organizing a national network of local chapters to play a leading role in CRS’ efforts to address the root causes of global poverty, hunger and violent conflict around the world. In its first year, CRS’ faith-based advocates succeeded in passing legislation that will help generations of children in developing countries not only survive but thrive through the benefits of early childhood development.

Like the IAF, CRS understands that lasting change, both social and spiritual, often comes about when ordinary citizens work together for a just and peaceful world. Through the building of God’s kingdom “on earth as it is in heaven,” Christians can cultivate the virtue of solidarity while also giving witness to the radical communion that God desires for all of humanity and creation.

(Lopez is a Catholic social activist who teaches pastoral leadership at Loyola Marymount University in Los Angeles. He works for Catholic Relief Services and is based in Southern California.)