When new technology is a good thing - Catholic Courier 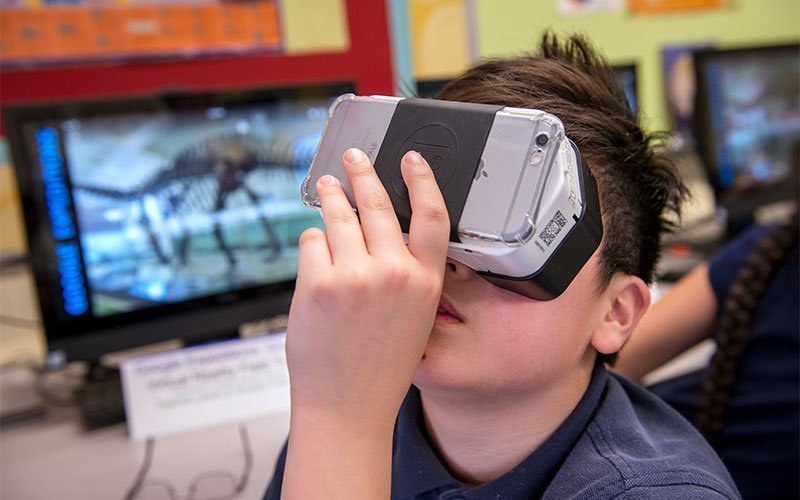 Fifth-grader Aaron Sheu uses virtual reality technology to tour a museum from his classroom at St. Louis School in Pittsford May 1. (Courier photo by Jeff Witherow)

I remember my technology classes at St. Helen School in Gates, during which I played such educational games as “Treasure Mountain,” “Math Blaster,” “Number Munchers” and, my favorite, “Oregon Trail.” As a kid, I could have sat there for hours on those IBM and Apple McIntosh computers.

Fast-forward 23 years and it’s a completely different scene inside the technology room at Pittsford’s St. Louis School, which I visited recently for a story I’m working on for later this summer. The fifth-grade students were sitting in their technology classes using iPhone 6s and headsets to view various places and subjects using virtual reality technology. They were getting tours of the White House from President Barack Obama and First Lady Michelle Obama, visiting Barcelona and even seeing the planet Jupiter. They were doing all this without leaving their classroom.

I was fascinated by how this technology — something that many would consider being used solely for enhancing video games and movies — was being used to teach children various subjects, like science, government and even religion. Instead of just learning information from a textbook or visiting a website, the students were actually seeing, hearing and experiencing it all right in front of them. These were once-in-a-lifetime experiences, as these students will never get to visit Jupiter or the International Space Station, let alone seeing the inside of the White House. From their reactions and the looks on their faces, you could easily see how much they were enjoying it.

We always hear about the negative effects of too much technology, but this is a good example of how ever-changing technology is having a positive impact on children and their education.

Technology certainly has come a long way since “Math Blaster” and “Oregon Trail.“