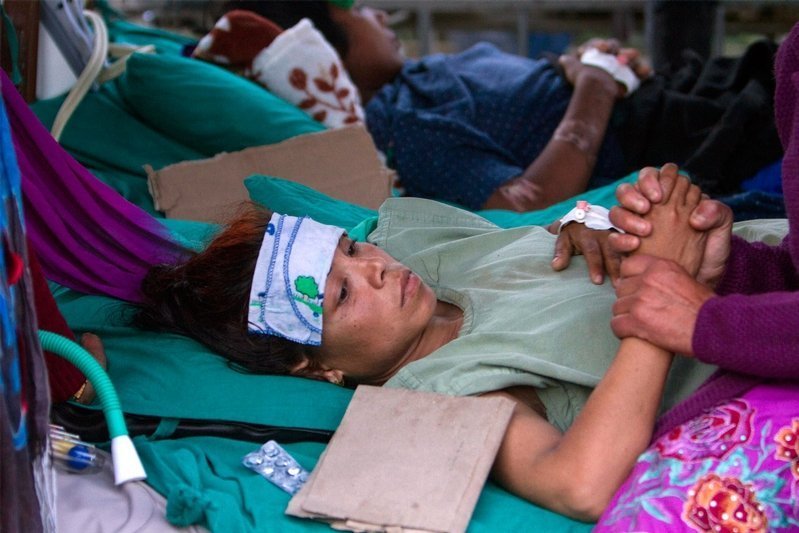 A young earthquake victim is comforted outside a hospital in Kathmandu, Nepal, May 12. A magnitude-7.3 earthquake hit a remote mountainous region of Nepal that day, killing at least 19 people, triggering landslides and toppling buildings less than three weeks after the country was hit by its worst quake in decades.
By Anto Akkara
Catholic News Service
NAMJUNG, Nepal (CNS) — As the magnitude-7.3 quake hit, screaming and shouting filled the mountain village of Namjung, where approximately 600 people had gathered to collect relief material being distributed by Catholic Relief Services.
When the quake ended May 12, the people were anxiously looking at dust rising from the nearby villages, with the collapse of houses and other buildings.
"We don’t know what is happening. It has become too frequent," said Bishnu Kapri, a schoolteacher whose cracked house was being used by CRS as a storehouse.
Jennifer Hardy, CRS communications officer who was in Namjung when the quake struck, said she was at a relief distribution site in a mango grove.
"Looked like it was snowing mango tree leaves. Surreal," she said in a tweet.
She also tweeted: "Heartbreaking to see ppl frantically call loved ones after today’s #earthquake, but have no connection for hours. Emergency comms critical."
Relief officials said more than 57 people died in the May 12 quake, one of the many temblors that followed a magnitude 7.8-quake that hit April 25 and left more than 8,000 people dead.
Namjung is more than 70 miles from Nepal’s capital, Kathmandu, and on the six-hour drive back to the city, people could be seen putting up tents on the roadsides to sleep during the night in the open.
"We are worried," said Yamen Kayastha, a Catholic with his wife and three children who has taken shelter in the Assumption Catholic Church compound in Kathmandu.
Kayastha, a musician and member of Focolare movement from Nepal, told CNS that he fractured his finger and had to rush to the hospital after he fell down the steps while running out of his flat during the May 12 quake.
Meanwhile, the Catholic Church in Nepal announced that the May 14-16 visit of apostolic nuncio, Archbishop Salvatore Pennacchio, had been postponed.
Copyright © 2022 Catholic News Service, Inc. All rights reserved. Linking is encouraged, but republishing or redistributing, including by framing or similar means, without the publisher's prior written permission is prohibited.