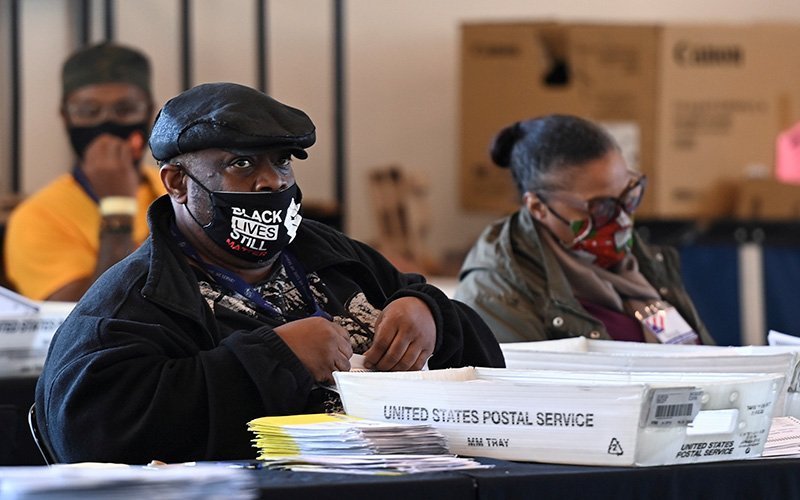 Employees of the Fulton County Board of Registration and Elections process ballots in Atlanta Nov. 4, 2020. (CNS photo by Brandon Bell, Reuters)

WASHINGTON (CNS) — Less than half a dozen states were still counting the ballots that will hand either a second term to Republican President Donald Trump or victory to his Democratic opponent, former Vice President Joe Biden.

Two days after the Nov. 3 election, Georgia, Pennsylvania, Arizona, Nevada and North Carolina were updating the vote count in their respective states, sometimes fluctuating between the two candidates, but it means little to a public on the edge, most wanting an answer in a race too tight to call.

Nov. 5 estimates from The Associated Press show Biden leading with 264 electoral votes to Trump’s 214, but Pennsylvania, with 20 electoral votes and Georgia with 16, could still buoy Trump’s chances for victory, depending on the remaining states.

The president’s campaign team, in the meantime, signaled it would launch a legal fight to stop counting votes or recount votes in Pennsylvania, Michigan, Georgia and Wisconsin, but remaining states such as Nevada, with only six votes, also could come into play.

By midday Nov. 4, Trump’s 2020 campaign manager, Bill Stepien, said the campaign had officially filed a lawsuit in the Michigan Court of Claims to halt counting of ballots until it is granted “meaningful access” to the numerous counting locations “to observe the opening of ballots and the counting process, as guaranteed by Michigan law.

The “presidential race in the state remains extremely tight as we always knew it would be,” he said.

Later in the day, the campaign filed lawsuits in Pennsylvania and Georgia and also announced it would ask for a recount in Wisconsin. Republican lawyers had already legally challenged how Pennsylvania and Nevada handled absentee votes.

Trump had declared victory a few hours after polls closed and demanded the vote count stop. His campaign’s threats of legal action came immediately, even though it’s typical in many states, such as Pennsylvania and Georgia, for the vote count to continue, particularly for ballots that arrived by mail after Election Day but were postmarked that date.

On Nov. 5, Trump continued to say “STOP THE COUNT” via Twitter.

“The important thing from my perspective right now is that we get an accurate count. Count all the ballots, as required by law and that the will of the people is respected,” said Pennsylvania Attorney General Josh Shapiro in a news show, addressing the president’s threat to take his fight to stop the vote count to the U.S. Supreme Court, because the state was accepting postmarked ballots that had been sent on Election Day.

“Every vote matters. Let them count,” Shapiro tweeted Nov. 4. “Volunteers and clerks from our communities are counting the votes. They will provide a fair, accurate count.”