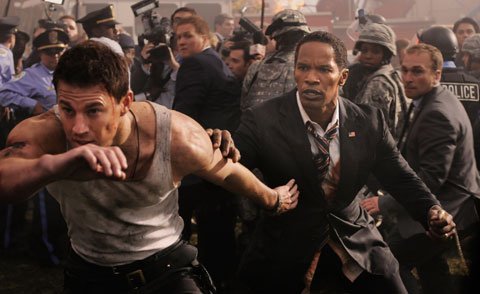 Having laid waste to Washington by way of an alien invasion in "Independence Day" and via the Mayan apocalypse in "2012," he returns to form in "White House Down" (Columbia). This time, domestic terrorism is to blame for the swath of destruction along Pennsylvania Avenue.

Third time’s a charm, however, as Emmerich has crafted a fast-paced thriller with heart — but also with tongue firmly planted in cheek. Based on a clever screenplay by James Vanderbilt ("The Amazing Spider-Man"), "White House Down" never takes itself too seriously, injecting humor into a survival drama that crosses "Die Hard" with "Air Force One."

John Cale (Channing Tatum) is a member of the security detail protecting Speaker of the House Eli Raphelson (Richard Jenkins). His goal is to join the Secret Service and serve the president, James Sawyer (Jamie Foxx).

John’s motivation is personal; he wants to impress his young daughter, Emily (Joey King), who is obsessed with politics and runs her own blog.

John arranges an interview with agent Carol Finnerty (Maggie Gyllenhaal) at the White House. He brings Emily along, and the child is agog with excitement. Unbeknownst to her, though, Dad does not get the job.

John and Emily decide to take the White House tour (this is pre-sequestration, of course). Prophetically, their guide points out a painting of the burning of the White House by British troops during the War of 1812.

Meanwhile, evil forces are at work inside the Capitol and at the White House, where a team of terrorists have gained entree disguised as workers installing a home theater for the first family.

Before you can say "House of Representatives," the Capitol dome blows up and mercenaries are swarming all over the executive mansion. Martin Walker (James Woods), head of White House security, grabs the president and they head down to the underground bunker.

Of course, tourists make easy hostages. John springs into action and escapes, but becomes separated from Emily. Still, the ingenious girl manages to do her bit: She uses her cell phone to upload video of the attack to the Internet, blowing the terrorists’ cover.

Without spoiling the plot and its many twists, suffice it to say that, predictably, John winds up being the president’s only friend and protector.

Amid the mayhem, "White House Down" gets a little preachy, slipping in talk about peace in the Middle East, the impact of war on combatants, and the political power wielded by military contractors and arms manufacturers. But these issues, important as they are, take a back seat to unabashed patriotism and the portrayal of heroic sacrifice for neighbor, family, and country.

The film contains much intense but mostly bloodless violence, a fleeting sexual image, and occasional crude and profane language. The Catholic News Service classification is A-III — adults. The Motion Picture Association of America rating is PG-13 — parents strongly cautioned. Some material may be inappropriate for children under 13.

– – –
McAleer is a guest reviewer for Catholic News Service.