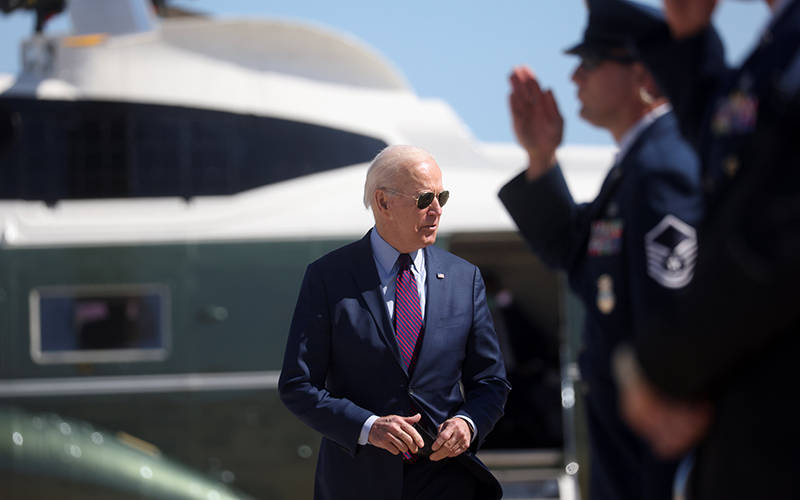 President Joe Biden is seen at Joint Base Andrews in Md., May 18, 2021. He met with six beneficiaries of the Deferred Action for Childhood Arrivals, or DACA, program May 14, 2021. (CNS photo by Leah Millis/Reuters)

President Joe Biden welcomed to the White House May 14 six beneficiaries of a program that helps young adults brought into the country illegally as children.

In a readout of the meeting provided by the White House, officials said the president during the meeting “reiterated his support” for those presently enrolled in the Deferred Action for Childhood Arrivals program.

DACA is an Obama administration program that allows a work permit and relief from deportation, among other benefits, for young immigrants in the country without documents who qualify. It does not, however, provide a permanent solution so that they can legally remain in the country.

Though popular among Republicans and Democrats, efforts to pass a bill in Congress that would help put the group on a path toward permanent residency and eventual citizenship, have eluded past administrations.

The White House readout said the president met with DACA recipients who work in health care, education, and agriculture “to discuss their experiences on the front lines of the pandemic.”

One of the DACA participants was Maria Praeli, who issued a statement after the meeting.

“To know that the president of the United States wants to hear our stories and understand what our lives are like, and how we and our families have struggled with the broken immigration system, is deeply meaningful,” she said.

“It’s meaningful, too, that we were able to be candid with the president — that as thankful as we are to have been eligible for DACA, the past four years have made painfully clear how tenuous that protection is,” she continued. “Our futures were threatened by the people who worked in this very building, by the person who sat in his chair.”

Even as Biden has expressed support, DACA recipients remain uncertain about their future, she said.

Though the administration has made public an ambitious plan to legalize some 11 million unauthorized immigrants currently in the U.S., it may not have enough votes in Congress to pass it. DACA recipients, however, have enjoyed widespread support for their plight.

A Pew Research Center poll from June 2020 found that “74% of Americans favor a law that would provide permanent legal status to immigrants who came to the U.S. illegally as children, while 24% are opposed.”

However, many DACA recipients come from families whose members have a variety of temporary permissions, or none at all, to be in the U.S. and they continually lobby for wide-ranging immigration protections.

“Our lives have been in limbo for far too long,” Praeli’s statement said. “Every day that goes by without Congress passing permanent legislative protections — for Dreamers and DACA recipients like me, TPS holders, farmworkers and the entire undocumented population — is a day that hurts all of us.”

She called it “incredibly painful for our individual lives, for our families who live in fear of being separated from our loved ones, and for our country every day that Congress fails to act.”

Praeli added, “I’m encouraged that our meeting with President Biden today made even clearer the incredibly high stakes of permanently protecting immigrants from deportation — and I believe he’ll do everything he can to make urgent action possible.”