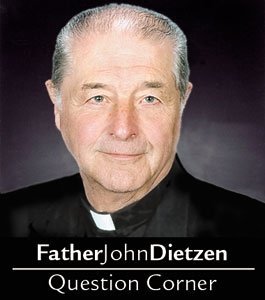 Q. Can you explain why the archangels Michael, Raphael and Gabriel are referred to as saints? I have understood that we humans aspire to sainthood and can never become angels, which are special creations of God. (New York)

A. The word "saint"’ (which comes from the Latin sanctus, holy) refers, in Catholic tradition, to those who are with God in eternity. As the Second Vatican Council teaches, they are joined with God forever in a life free from decay, and share in his life and happiness. (See the Pastoral Constitution on the Church in the Modern World, Nos. 18 and 21.)

Thus, there’s nothing that would deny applying the title to angels, and Christians have done so for centuries. Part of Christian tradition is the belief that God created these spiritual (nonbodily) beings with the power of reason and with freedom to make personal moral decisions.

Certain of them, according to the prevailing opinion, sinned by defying God in some way, others did not. Those who remained faithful are, of course, with God their creator, share his life and blessedness, and are therefore deserving of the title saint.

Three angels appear in the Bible by name, Gabriel, Michael and Raphael, and they are the only ones honored by name in the church’s devotions and liturgy. The Eastern churches honored St. Michael as early as the fourth century, and he was the only individual angel venerated in the West until about the year 800.

Their feast is celebrated together on Sept. 29. Michael, Gabriel and Raphael, it is worth noting, are among the many holy ones we venerate who have never been officially or formally canonized. Popes have been canonizing saints for only about 1,000 years.

The angels, therefore, are like thousands of others on the roll of saints (the apostles, for example) who came to have this distinction by popular acclaim of the people, through their especially distinguished witness to Christian life and teaching, or because of their extraordinary service to the church or humanity.

Q. At what age may a child receive Communion under the form of wine? On a trip this summer I saw a youngster, about 11 years old, receive the wine from the priest. We were confused. Isn’t it unlawful to give a child wine?

I never knew that younger people under the lawful drinking age could receive this way. It was the first time I’ve seen it. (New York)

A. The church has no rule about this. Ultimately, of course, it is the parents’ responsibility to judge.

I’m more than a little surprised you never have seen this occur. It is quite common for children to receive from the cup, sometimes even at their first Communion. I’ve never heard a complaint or information of any sort about a problem.

Since Communion from the cup is part of a religious ceremony, in no place, I believe, is it considered a violation of drinking age laws.