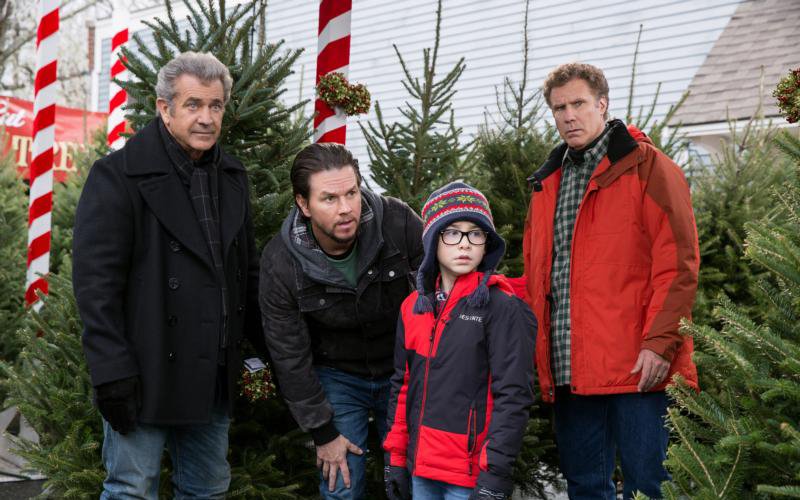 Mel Gibson, Mark Wahlberg, Owen Wilder Vaccaro and Will Ferrell star in a scene from the movie "Daddy's Home 2." (CNS photo by Paramount)

Before straying into such dubious territory, Anders — with an eye, no doubt, to someone’s idea of a laugh riot — busies himself finding outlandish mishaps for Will Ferrell to undergo. Ferrell once again plays Brad Whitaker, the timid stepfather whose rivalry with his children’s he-man biological dad, Dusty Mayron (Mark Wahlberg), fueled the first movie.

Brad and Dusty have achieved a fragile harmony. But their detente is endangered by the arrival for a Christmas visit of their own temperamentally contrasting fathers: Brad’s sensitive pa, retired mail carrier Don (John Lithgow), and Dusty’s trouble-loving, womanizing ex-astronaut sire, Kurt (Mel Gibson).

Kurt verbally pokes and prods Dusty, constantly implying that his association with Brad is undermining both his status as a parent and his masculinity. One of the quarrels he manages to provoke erupts during the clan’s stint as figures in their town’s tableau-style Nativity scene.

Anders and his script collaborator, John Morris, manage to steer clear of anything overly irreverent. Even so, this particular gambit may not sit well with many viewers of faith.

However, we’re soon back to watching Brad get tossed around, knocked off his feet and slammed into walls.

Though wife Sarah (Linda Cardellini) and kids Megan (Scarlett Estevez) and Dylan (Owen Vaccaro) are usually kept in the background, Dylan’s discovery of girls is a recurring joke, one that eventually sends “Daddy’s Home 2” in an unexpectedly distasteful direction. Suffice it to say that, in a bid for a surprise laugh, the screenplay momentarily flirts with a vague form of incest.

Subsequently, as the movie shows us just how successfully the 11-year-old has overcome his innate shyness, with the camera panning a long line of girls awaiting their chance to kiss Dylan under the mistletoe, from within their ranks the face of a boy pops out, beaming with anticipation.

And a Merry Christmas to you, Hollywood.

The film contains much sexual humor, including a sight gag about homosexuality, a few mild oaths, occasional crude and frequent crass language and an obscene gesture. The Catholic News Service classification is A-III — adults. The Motion Picture Association of America rating is PG-13 — parents strongly cautioned. Some material may be inappropriate for children under 13.