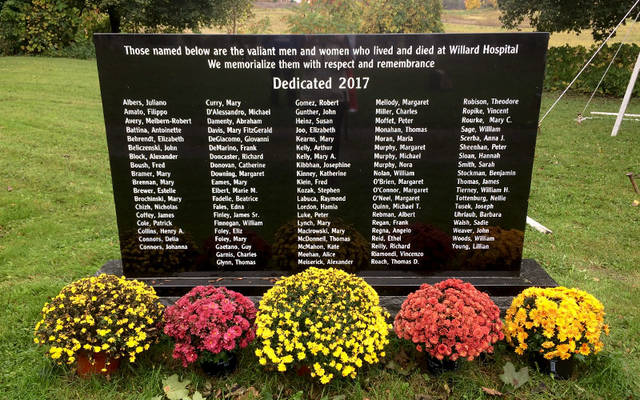 The names of 96 people who passed away when they were residents of Willard Psychiatric Center are engraved on a memorial located at Holy Cross Cemetery in Ovid. (Photo courtesy of Colleen Spellecy)

On Oct. 13 approximately 35 people gathered around a large black monument in Holy Cross Cemetery in Ovid. Most in the crowd had never met any of the 96 deceased whose names were etched into the granite stone, but they gathered to memorialize the departed just the same.

The 96 individuals named on the stone were residents of the nearby Willard Psychiatric Center when they were alive, said Colleen Spellecy, who spearheaded the effort to install the monument.

“They lived and died at Willard, and ‚Ä¶ family members would have basically claimed their bodies to bring them to a Catholic cemetery,” explained Spellecy, who attends St. Rita Parish in Webster.

In 2011 Spellecy read The Lives They Left Behind: Suitcases From a State Hospital Attic, a 2008 book that detailed the lives of 10 Willard residents whose belongings were among those found in an attic on the hospital grounds after the facility closed in 1995. After reading the book Spellecy learned that a cemetery on the Willard campus was the final resting place for nearly 6,000 residents who’d died there over the years.

She was dismayed to find that those graves at Willard were marked with numbers rather than names, and that many of these simple numbered markers had been pulled out, lost or overgrown over the years.

“You would never even know it was a cemetery,” Spellecy told the Catholic Courier in 2011. “You have to dig around to find a marker. You’d need a metal detector to find some of those.”

In March 2011 she founded the Willard Cemetery Memorial Project with the goal of restoring dignity to Willard’s former residents. In September of that year the Seneca County Highway Department installed a sign designating the area as a cemetery and informing visitors that 5,776 departed Willard residents where buried there.

Spellecy, who lived in Waterloo at the time, and her fellow committee members spent many hours uncovering more than 350 grave markers and taking care of the grounds at the Willard cemetery. After consulting with staff of the New York State Office of Mental Health, they were able to make contact with the surviving family members of several of those buried there, and received permission to memorialize the deceased.

During the course of the committee members’ research, they learned that 96 deceased Willard residents had been buried at Holy Cross Cemetery and set their sights on memorializing those individuals. In August 2016 new legislation amended the state’s existing mental hygiene law to allow the names, birth dates and death dates of patients buried in the cemeteries of state mental health hospitals to be made available for headstones and other memorials 50 years after their death.

“My committee and I researched the names that we really felt were buried (at Holy Cross). We looked at burial records and death records. We sent all the names to the Office of Mental Health and they vetted them,” Spellecy said. “I thought it would take forever, but they came back early and we were so happy. The same day they gave us the list of names of the 96 that we could put on the stone, they told us they could pay for the memorial. It was amazing.”

The memorial service was beautiful, noted Carol Crossed, a Rochester resident and well-known pro-life activist. The service, and in fact all of the efforts of the Willard Cemetery Memorial Committee, are pro-life efforts, she said.

“They say in a huge way that these people are loved by God. It doesn’t matter about your disability or your imperfection,” Crossed said.

During the service Crossed noticed a woman who was visibly emotional, and after introducing herself, she learned the woman had worked at Willard before it closed.

“She choked up a little bit. She felt like it was honoring the people that she cared so much about, and I thought that was really beautiful,” Crossed said.

The memorial service and the committee’s efforts have helped Crossed better understand the corporal work of mercy that instructs Catholics to bury the dead, she said.

“That’s always been the hardest one for me to get. What does that really mean? ‚Ä¶ I think what (Spellecy) has exposed me to is a whole other level of honoring the people who have gone before us,” Crossed said. “She loves even those that she never knew and those that are no longer here, and I think that’s the hardest way to love anybody.”