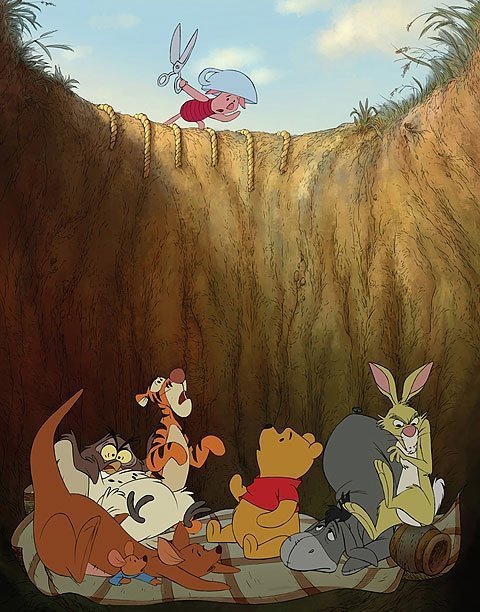 NEW YORK (CNS) — What better spot for a summer outing than A.A. Milne’s Hundred Acre Wood, territory familiar and dear to generations of the kid-lit giant’s faithful readers? Thanks to the delightfully innocent, predominantly animated adaptation "Winnie the Pooh" (Disney), moviegoers will find just such an excursion awaiting them at the local multiplex.

With its messages about friendship and putting the interests of others first, directors Stephen Anderson and Don Hall’s visually and spiritually faithful screen version of incidents drawn from Milne’s classic books is family fare of the highest quality and widest appeal.

Free not only of problematic material but of tiresome potty humor as well — no Mr. Popper’s pooping penguins here — this is an entirely welcome break for conscientious parents. Better yet, it’s a jaunt they themselves can enjoy, thanks in no small part to the amusingly recognizable personality types on display among Milne’s anthropomorphized menagerie.

Exhibit A: Pooh Bear himself (voice of Jim Cummings). Gentle, endearing, devoid of intellectual pretensions — "I am a bear of very little brain," he frankly admits — Pooh’s love of stoutness-inducing honey is his primary motivation in life. What a bother, then, to wake up one morning and discover that breakfast will have to be postponed because he’s fresh out of the sweet, sticky stuff.

As Pooh, his tummy growling, goes off in pursuit of renewed rations, his quest is interrupted by the latest crisis in the perpetually woebegone existence of his pessimistic friend Eeyore (voice of Bud Luckey). The downcast donkey, it seems, has lost his tail.

Things go from bad to worse, and Pooh is further distracted when a note from Christopher Robin (voice of Jack Boulter) is misinterpreted by bossy local know-it-all Owl (voice of Craig Ferguson) to mean that the boy has fallen into the clutches of a monster called the Backson. (As viewers conversant with their ABC’s can tell, that’s Owl’s misreading of Christopher Robin’s cheerful assurance "Back soon.")

Naturally, all of Christopher Robin’s friends — which is to say, everyone in the Wood — drops everything to find and rescue the lad. Besides the aforementioned trio, the search party includes exuberant Tigger (also Cummings), timorous Piglet (voice of Travis Oates) and sensible, resourceful Rabbit (voice of Tom Kenny).

As Pooh, Cummings — a celebrated Catholic voice actor — uncannily evokes the soothing accents of the late Sterling Holloway. Holloway voiced Pooh in a series of Disney theatrical featurettes beginning with "Winnie the Pooh and the Honey Tree," released in 1966.

The proceedings are further enhanced by narration from Monty Python-vet John Cleese and songs by the husband-and-wife team of Robert Lopez and Kristen Anderson-Lopez. The movie’s brief 69-minute running time is unlikely to tax the attention of even the smallest audience members, and will surely leave true fans of various ages wanting more.

"Winnie the Pooh" is being shown in conjunction with the animated short "The Ballad of Nessie," an amusing, eco-friendly take on the origins of Scotland’s most famous monster.