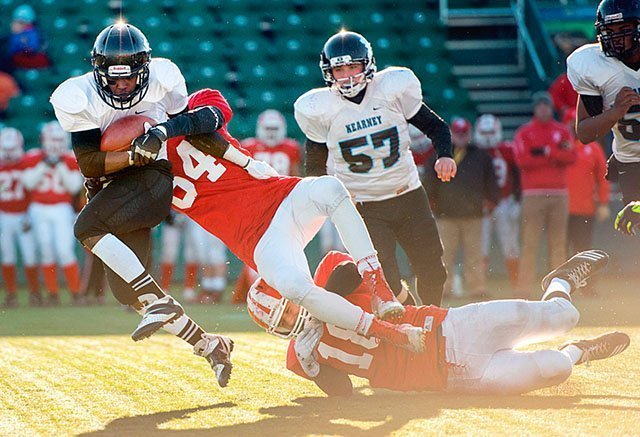 Several Catholic high schools in the diocese have advanced far into post-season playoffs, while two teams also made headlines when their seasons were ended by player eligibility situations.

* Aquinas Institute girls’ soccer, which shared the Section 5 Class B title with No. 2 Greece Odyssey following a 1-1 overtime tie in the final Oct. 31. Alana Piano scored the lone Little Irish goal, in the first half. Fourth-seeded AQ then won 4-2 on penalty kicks to determine which school would advance to states. The Little Irish, with a 12-5-3 record, will face Falconer of Section 6 in a state quarterfinal game Nov. 8 at 7:30 p.m. at Webster Schroeder High School.

* Elmira Notre Dame boys’ soccer, which won its first Section 4 title in 28 years with a 2-0 victory over top-seeded Lansing in the Class C final Nov. 1. Nick Steed and Aidan Sharma were the goal-scorers, and goalie Will Brennan picked up the shutout as the second-seeded Crusaders improved their record to 17-0-1.

However, Notre Dame’s year came to a surprising close before it had a chance to play in the state Class C quarterfinals. The school announced Nov. 6 that it was withdrawing from the state tournament, due to an internal investigation that found the team had used an ineligible player during the season.

* Bishop Kearney football, which reached the Section 5 Class D final. The Kings went up 14-0 against top-seeded Red Jacket, but the tide turned from there in a 50-14 loss Nov. 2. Third-seeded Kearney had reached the final with a 22-12 win over No. 2 Dundee in semifinal play Oct. 25 as quarterback Todd LaRocca threw touchdown passes to Ardell Brown, Justin Davis and Jalen Long. BK’s final record was 7-2.

* Our Lady of Mercy girls’ soccer, which fell 1-0 in overtime to top-seeded Pittsford Mendon in the Section 5 Class A final Nov. 3. Second-seeded Mercy had gotten to the final with a 3-2 overtime win over No. 3 Greece Athena in semifinal play Oct. 29. Amanda Mietus got the game-winner, and Anna Doerr and Emily Wade also scored for the Monarchs. Mercy finished with a 14-3-3 record.

* Notre Dame girls’ soccer, which got to the Section 4 Class C final. The Crusaders fell 3-0 to No. 1 Lansing in the title game Nov. 1. Notre Dame was seeded second and had reached the final with a 4-0 win over third-seeded Unatego Oct. 29, as Laurel Vargas had two goals and an assist. ND ended up with a 13-3-1 record.

* Kearney boys’ soccer, which finished as runner-up in Section 5 Class C2. The third-seeded Kings were edged 2-1 in overtime by No. 4 seed Keshequa in the title match Nov. 1. BK had made the final with a 2-0 victory over No. 2 Wheatland-Chili Oct. 29 as Jeremiah Johnson and Dante Green each scored. The Kings’ final record was 16-4.

Meanwhile, Aquinas’ football team was unable to defend its sectional and state crowns after forfeiting its sectional quarterfinal game.

The forfeit involved the use of star quarterback Jake Zembiec, who had missed most of the 2014 season due to a wrist injury. He returned in time to lead AQ to an apparent 37-20 win over Pittsford Oct. 27 in Section 5 Class AA play.

However, NYSPHSAA rules state that a player must have competed in at least three regular-season games to be eligible for sectionals, and Zembiec had only played in two.