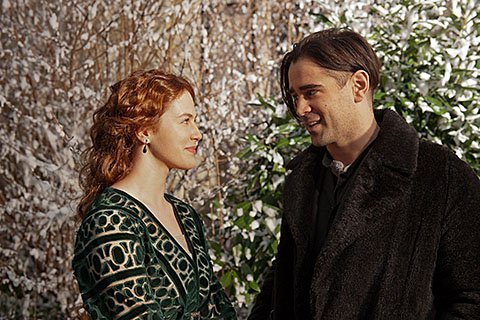 Jessica Brown Findlay and Colin Farrell star in a scene from the movie "Winter's Tale." The Catholic News Service classification is A-III -- adults. The Motion Picture Association of America rating is PG-13 -- parents strongly cautioned. Some material may be inappropriate for children under 13.

That the souls of the deceased become stars, that everybody is destined to achieve a miracle and that, if you’re lucky, a snow-white flying horse will appear on the scene just when you need his services most.

That’s what happens to the film’s protagonist, Peter Lake (Colin Farrell). But then again, Peter’s life has been rather unusual from the start: When his immigrant parents were turned away from America’s shores for flunking the medical exam at Ellis Island, they did their best to secure their infant son’s future by setting him adrift in a miniature boat on the waters of New York Harbor.

Did baby Peter’s craft capsize into the polluted waves? Of course not, because the movie’s version of early 20th-century Gotham is a fantastical place where such un-poetic events are verboten.

Flash-forward a couple of decades and circumstances have forced grown-up Peter, a would-be mechanic, to turn thief. Worse yet, he’s on the run from his former mentor, demonic crime lord Pearly Soames (Russell Crowe). But no sooner do Pearly and his gang of thugs have Peter cornered, than his personal Pegasus appears for the first time and whisks him to safety. Equus ex machina, as it were.

It’s no wonder that Peter is soon letting the steed guide his burglarizing choices. And a good thing too, as this leads him to the Fifth Avenue home of newspaper magnate Isaac Penn (William Hurt), where his larceny is interrupted by the unexpected presence in the house of Isaac’s sequestered invalid of a daughter, comely but consumptive Beverly (Jessica Brown Findlay).

Peter only has to take a single gander at Beverly — and overhear her playing Brahms on the pianoforte — to know she’s The One. Fortunately for him, brink-of-the-grave Beverley turns out to be rather unflappable. So much so that, in a trice, she’s offering the Irish-accented intruder a nice cup of tea. Quite hospitable, given the circumstances.

On the subject of that brogue, which the County Dublin-born Ferrell certainly comes by honestly, precisely how Peter should have acquired it is a bit of a mystery. The opening scenes suggest his mom and dad hailed from Russia, while a cameo by Graham Greene in the approximate persona of Peter’s foster father indicates that he was raised by Native Americans.

Perhaps he picked it up listening to John McCormack records?

Be that as it may, pity our poor unlikely couple. Not only is the Grim Reaper out to thwart their bliss; Pearly is too. Most decidedly opposed to all forms of happiness is scar-faced Pearly. And he’s got himself no lesser an ally in his down-with-smiles crusade than Satan (played by a very familiar but jaw-droppingly miscast star).

The nature of the picture’s source material — Mark Helprin’s celebrated 1983 novel — invites speculation about what went wrong, more generally, on the way to the big screen. All audience members who haven’t read Helprin’s book may know for sure is that the characters in writer-director Akiva Goldsman’s adaptation of it spout sentimental twaddle. They also subscribe to a version of metaphysics that might have been lifted from a Hallmark greeting card.

The film contains some harsh but bloodless violence, semi-graphic premarital sexual activity, brief partial nudity, a couple of uses of profanity and at least one instance each of crude and crass language. The Catholic News Service classification is A-III — adults. The Motion Picture Association of America rating is PG-13 — parents strongly cautioned. Some material may be inappropriate for children under 13.