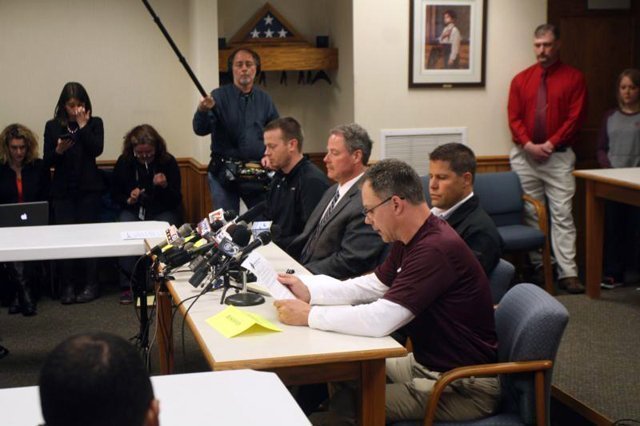 Principal Tom Zamzow of Antigo High School in Wisconsin, reads a statement during a press conference at Antigo City Hall April 25. The community is coping with a shooting at Antigo High School April 23 that left one young man dead and two students injured. Also pictured are Brian Misfeldt, left, school district administrator-designate; Langlade County Sheriff Bill Greening and Antigo Police Chief Eric Roller.
By Lisa Haefs
Catholic News Service
ANTIGO, Wis. (CNS) — Antigo’s churches and schools were reaching out to students and parishioners following a shooting at a high school prom.
Jakob Wagner, 18, shot two people outside of the Antigo High School prom late April 23 before being shot and killed by an Antigo police officer on a routine patrol of the parking lots surrounding the facility. Wagner graduated from the school in 2015.
Physically, the victims’ injuries are not life-threatening, police said. The male was shot in the leg and is recovering after what his parents said in a statement was a "long surgery." His prom date was grazed in the thigh. She was treated and released from Aspirus Langlade Hospital in Antigo. Neither victim was identified.
Emotionally, the toll may be much higher in the town of 8,000 about 150 miles north of MIlwaukee.
"Antigo has a long history of, when the chips are down, pulling together," said Father Charles Hoffmann, a retired priest of the Green Bay Diocese who has served in the community for more than five decades. "We all have a deep concern for the young people in the community."
Area parishes and churches of various denominations offered prayers for the victims and the community April 24.
Father Hoffmann and Deacon Tom Hartman led prayers at St. Joseph Holy Family Parish in Phlox.
"We offered prayers for the community and the victims of the shooting," Father Hoffmann said. "We just lamented with each other, feeling concern for all involved, including the family of the shooter."
Members of Peace Lutheran Church in Antigo quickly pulled together an afternoon prayer service for the community.
"It gave everyone in the community a place to go and hear God’s words of comfort," said the Rev. David Karolus, Peace Lutheran’s pastor. "After something like this, people need a place to be with other people and draw the comfort that comes from God’s word."
In the tightknit community, students at All Saints Catholic School knew someone attending or had family members at the spring promenade. The vast majority of students who graduate from All Saints move on to Antigo High School, joining their brothers and sisters and continuing in the traditions of their parents and grandparents.
Principal Paul Galuska said the school followed protocol suggested by Antigo High School staff as classes resumed April 25, offering the services of a school guidance counselor as well at Deacon Andy Bures of St. John the Evangelist Parish in Antigo.
"We are basically following the same steps with our students," Galuska said. "We are all on the same page."
Students returned to class April 25 and "we prayed for everyone involved," Galuska said. "We prayed for all those impacted by Saturday’s events. … and we continue to pray for them this week."
Local clergy said the prayers will continue well into the future, transcending religious boundaries.
"This is a unifying force within the community," Father Hoffmann said.
The same sentiment extended to the remarks from the family of the young man injured in the shooting.
"We want everyone to know that we believe and trust in the eternal God," the family said. "We are so thankful for the hope that we have in him. That all can be forgiven of their sins and have eternal life when they believe in Jesus Christ as Savior."
They had another request as well.
"Please also pray for the family of Jakob Wagner," they said. "As much as we are struggling through this event, we cannot imagine the grief they are experiencing at this time."
– – –
Haefs writes for The Compass, newspaper of the Diocese of Green Bay, Wisconsin.
Copyright © 2023 Catholic News Service, Inc. All rights reserved. Linking is encouraged, but republishing or redistributing, including by framing or similar means, without the publisher's prior written permission is prohibited.