With Jim and Jeannie Gaffigan, it's a family affair - Catholic Courier 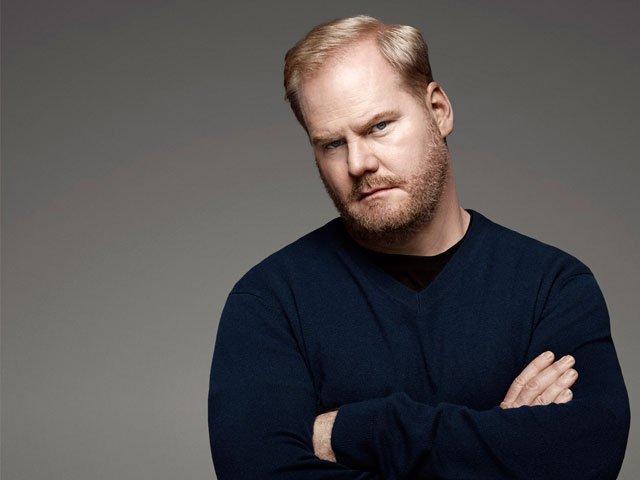 Jim Gaffigan, the comic actor known both for his funny books like "Dad Is Fat" and "Food: A Love Story" and his inclusion of his Catholicism in his stand-up routines, is pictured in a 2010 photo. Gaffigan and his wife, Jeannie, have collaborated on a new TV Land cable sitcom, "The Jim Gaffigan Show."

Jim Gaffigan, the comic actor known both for his funny books like "Dad Is Fat" and "Food: A Love Story" and his inclusion of his Catholicism in his stand-up routines, has a close collaborator: his wife, Jeannie.
"We’re truly partners," Jeannie Gaffigan said during a June 11 teleconference with Jim to promote their TV Land cable sitcom, "The Jim Gaffigan Show." She doesn’t finish his sentences, but she can finish his jokes. "I can write in Jim’s voice well," she added. "I can understand his views about bacon. They’re not my point of view about bacon, but I know how his point of view is funnier."
"For comedians to have a writing partner is very rare," Jim said. "I was rather reluctant to get in with anyone. But Jeannie was so good."
The show is scheduled to premiere on TV Land July 15 (Check local listings for time). A sneak peak of the show can be viewed on his website, www.jimgaffigan.com.
The couple’s collaboration started with "Welcome to New York," a short-lived CBS sitcom from 2000.
Writing for TV, Jeannie said, "was something he was not familiar with, and I was. I was running a not-for profit theater company. We lived on the same block. Jim asked me to help him work on scripts. I was glad to do so. We started working together, and we really just connected. We’re really creative people. We both like to work a lot. We both added to each other’s skill sets. That professional relationship coincided with a romantic relationship."
"I lived across from this church where I got married in and our kids got baptized in," Jim noted. "I didn’t go in this church for 15 years. And then I met Jeannie. I had this romantic notion of having a lot of kids; I’m one of six. I would walk by Jeannie, and she would get pregnant."
The Gaffigans have five children and they live in Manhattan.
Their family, and their faith, will figure in the show. Jim stars as a fictionalized version of himself as a stand-up comedian raising five children in a two-bedroom New York City apartment, so the show is "really is a reflection of our lives," he noted.
One of the characters is an India-born priest whom Jeannie said "will be Jim’s ‘Jiminy Cricket,’" a reference to the conscience-prodding insect from the movie "Pinocchio."
"We try to treat every episode as our last episode. Given that we’re on TV Land, it might be the only episode people see," Jim said. But being on TV Land gives the Gaffigans more creative freedom.
"Some of the episodes that we’ve done, no network would want us to do with marketing and obtaining ad dollars, or the simple bureaucracy of what’s going on," Jim said. "This is a really hard and exhausting process. But having access to this authority that Jeannie and I have received from TV Land, I see as the only way to go.
"Pick a comedy you don’t like, and I’m sure there’s a dozen people you can blame. If you don’t like this show … there’s only two people to blame, Jim and Jeannie — and it’s obviously Jeannie’s fault!" he cracked. "We’ve seen this from a lot of our comedian friends. They go into these (sitcom projects) very well-intended and they go in with great comedic points of view, and it’s lost (in) the network machine — the approval of these big network studios and approvals for notes. I can’t imagine anyone going through that unscathed."
Jim, 48, is asked frequently about bringing Catholicism into his comedy and working "clean," meaning using no profanity. The conference call was no exception.
"The Catholic thing, it’s very much evolved. I don’t think comedians set out to do a certain style of comedy. I messed around with different styles of stand-up when I started, and you always end up doing what your personality is. In real life I may curse occasionally. I don’t curse (in the act) because it’s not necessary to curse," he said.
"I was raised a kind of cultural Catholic. And now I’m somebody who’s much more of a Catholic than even my family indicated I would be. The evolution of that as a topic of comedy has constantly surprised me. But I never imagined I would be the father of five. I never imagined I would be associated with doing food jokes, either. It’s not like we really have this much control over this path."
Jeannie, 45, is a native of Milwaukee, and Jim is originally from Illinois. The couple has been married since 2003.
Jim has said in interviews he will probably forever be known as "the Hot Pockets guy" for a commercial he did. But what if he had a say in how he’d like to be remembered?
"I think that comedians just want to be known as funny. All the other characteristics are — Hot Pockets or ‘clean comic’ — I just want to be considered funny. Not like-a-clown funny, but insightful funny," he said.
"Hopefully, when it’s all said and done, I want to be remembered as a decent father and husband. But when it comes to comedians, just funny."
—
Copyright (c) 2015 Catholic News Service/U.S. Conference of Catholic Bishops
Copyright © 2023 Catholic News Service, Inc. All rights reserved. Linking is encouraged, but republishing or redistributing, including by framing or similar means, without the publisher's prior written permission is prohibited.