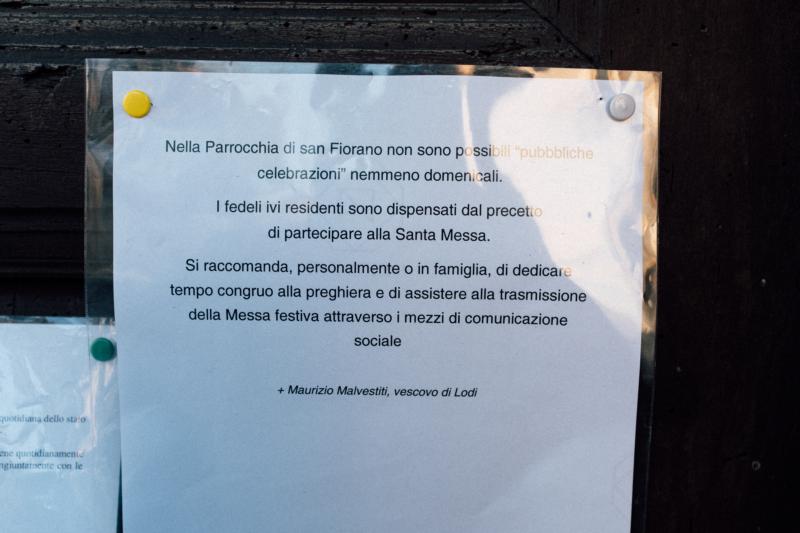 A sign on the entrance to a local Catholic church advises people to pray at home and that Sunday's Mass is canceled in San Fiorano, one of the towns on lockdown due to a coronavirus outbreak in Italy, Feb. 22, 2020. (CNS photo by Marzio Toniolo/Reuters)

ROME (CNS) — While Ash Wednesday Masses were canceled in several northern Italian dioceses to prevent the spread of the coronavirus, bishops composed special prayers for their people and offered alternative ways to begin the celebration of Lent.

Father Roberto Parisini, secretary general of the chancery of the Archdiocese of Bologna, issued a notice Feb. 25 telling pastors that although they should not celebrate public Masses, “nothing prohibits having a table in the church with blessed ashes and distributing them to individuals or small groups who request them.”

Cardinal Matteo Zuppi of Bologna invited Catholics in the archdiocese to watch on television or by internet the prayer service he would celebrate “behind closed doors” at 9 p.m. Feb. 26, Ash Wednesday.

The text of the prayer service was posted online and began: “Lord Jesus, you promised always, until the end of the world, to be in our midst when we gather in your name. Even if today we cannot gather with our brothers and sisters for the celebration, we want to enter into the solemn Lenten season together with the whole church.”

“The health problems of many people, the energy of those caring for them and the disadvantages we all must face invite us to broaden our hearts and pray more intensely for everyone,” the prayer continued.

As of noon Feb. 26, the Italian civil protection agency said there were 374 confirmed cases of the coronavirus in Italy, mostly in the north. Twelve people, all of whom had serious preexisting medical conditions, had died.

The Lazio region, which surrounds the Vatican, continued to have only three confirmed cases. While Pope Francis offered special prayers for those impacted by the coronavirus and shook hands with fewer people than normal at his weekly general audience Feb. 26, his celebration of Ash Wednesday was scheduled to proceed as normal.

Archbishop Francesco Moraglia of Venice, where public celebrations of Mass have been suspended at least until midnight March 1, issued a pastoral letter on Ash Wednesday.

“This year, Lent is beginning in an unforeseen way that we could not have imagined even a few days ago,” he said.

While urging Catholics not to panic, he said that as citizens, Christians have an obligation to accept the precautions ordered by the local government and that doing everything possible to help prevent further spread of the disease is an act of Christian charity.

“For believers nothing is an accident, and everything is an occasion for grace, a favorable time to grow both in our humanity and as disciples,” Archbishop Moraglia wrote.

“The situation we are experiencing brusquely awakens us from the illusion of being the generation that, thanks to its technical and scientific knowledge, has placed everything under control,” he said. “Fragility belongs to our condition as persons and creatures and, therefore, is not something that has been overcome.”

“To think that we can do without God, our creator and father, is pure illusion,” he said.

Archbishop Mario Delpini of Milan published a list of blessings he was invoking on his people, on those who were ill and on government officials charged with making “wise provisions” to deal with the spread of the disease.

“Every indication given for prevention and to promote prudent behavior will be accepted with rigor by ecclesiastical institutions,” he said.

“I invoke the blessing of God on our land and on the whole planet,” he began. “At this time of apprehension for ourselves and our loved ones, perhaps panic is spreading and infecting our lives with greater speed and more danger than the virus is.”

“Lord, bless our land, our families and our activities,” he prayed. “Fill our souls and our environments with trust and with a commitment to the good of all and attention to those who are alone, poor or sick.”

“May scientists, researchers and those dedicated to caring for the sick and preventing illness be blessed,” the archbishop said.