With Roe overturned, march will focus on Congress - Catholic Courier 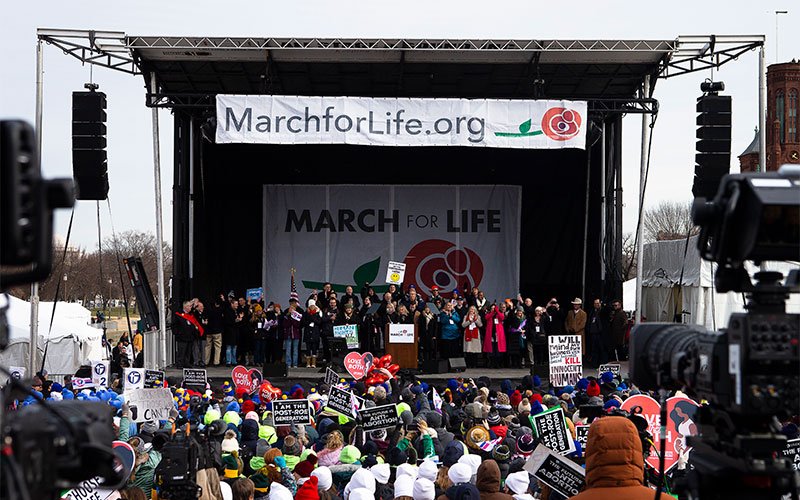 Jeanne Mancini, president of March for Life, concludes the annual March for Life rally in Washington alongside other supporters Jan. 21, 2022. (CNS photo by Tyler Orsburn)

Official: March for Life will continue

WASHINGTON (CNS) — Jeanne Mancini wants it to be clear: The national March for Life in Washington will continue even with the U.S. Supreme Court overturning Roe v. Wade, its 1973 ruling that found a right to abortion in the U.S. Constitution and legalized it nationwide.

The court overturned Roe June 24 in its ruling in Dobbs v. Jackson Women’s Health Organization, a challenge to a Mississippi law banning abortion after 15 weeks. The court affirmed the law 6-3 but also voted 5-4 to overturn Roe as well as 1992’s Casey v. Planned Parenthood ruling, which affirmed Roe.

March for Life to continue with one difference

The Jan. 20 March for Life will be the 50th rally and march since the first such event Jan. 22, 1974. Organized by Nellie Gray, a government lawyer, and the Knights of Columbus, it took place on the first anniversary of the Roe ruling.

This January there will be one difference: The march up Constitution Avenue, which has always ended at the Supreme Court building, will end at the East Front of the Capitol instead.

This reflects the pro-life movement’s focus on politicians instead of Supreme Court justices, and support for a national abortion ban, at 15 weeks of gestation, in a bill proposed by Sen. Lindsey Graham, R-S.C.

Mancini, in her capacity as head of March for Life Action, the organization’s lobbying arm, added her support for that measure in September.

“Limiting abortions after 15 weeks is the least we can do to protect women, as well as babies who at this stage are already fully formed in their mother’s womb and can feel pain,” her statement read. “It is consistent with what we know from science about the harm of late abortion, as well as in line with where Americans stand on the issue.”

The “Protecting Pain-Capable Unborn Children from Late-Term Abortions Act,” as the bill is called, includes exceptions for rape, incest or to save the life of the mother. The measure also has been introduced in the House.

Currently, the Democratic majorities in the Senate and House make it impossible for that bill to advance, so its future may depend on the outcome of the Nov. 8 midterm elections, if Republicans win a majority of seats.

Theme for rally and march announced

On Oct. 13, Mancini announced the theme for the Jan. 20 rally and march: “Next Steps: Marching in a Post-Roe America.”

“We are going to celebrate,” she said during a news conference at the Heritage Foundation offices. “History is shifting now, and we have to take stock of all that has happened.”

Mancini called the national march “critical to our strategic plan.”

March for Life attracts people from across the country

Always held at or near the anniversary of Roe, the march attracts groups from across the country, with many traveling to Washington on a bus pilgrimage.

Although March for Life doesn’t attempt estimates, the single largest rally and march in the event’s history is considered to be the 2020 event at which President Donald Trump spoke at the rally on the National Mall. It drew more than 100,000 participants.

The following year, buffeted by both the COVID-19 pandemic and the Capitol violence of Jan. 6, saw the smallest gathering, with an invited group of 80 met halfway by about 120 others. Mancini left red roses, the march’s emblem, near the rear entrance of the Supreme Court.

The strategic plan for organizers includes increasing the number of marches in state capitals to all 50 states in the next seven years. Currently, marches have been held in California, Connecticut, Pennsylvania, Virginia and Ohio, and next year one also is planned for Arizona.

“The culture of death is pervasive,” Jonathan Keller, president of the California Family Council, said at the news conference. “It’s amazing to think it took 50 years. But praise God, here we are.”

A number of “red” states have banned most abortions since the Dobbs ruling returned the issue to the states. However, some of the new state laws face court challenges.

Tony Dungy to be featured speaker

The rally’s featured speaker will be Tony Dungy, who was a head coach in the NFL for 13 seasons. Speaking at the annual Rose Dinner that weekend will be Jonathan Roumie, who plays Jesus in the TV series “The Chosen.”

Counterprotesters over the years have been few in number. This past January, the march was briefly delayed when members of Patriot Front, a neo-Nazi group, attempted to lead it.

“I wouldn’t call any march I’ve been part of a predictable march.” Mancini told Catholic News Service at the time. “It’s always been a little bit unpredictable.”