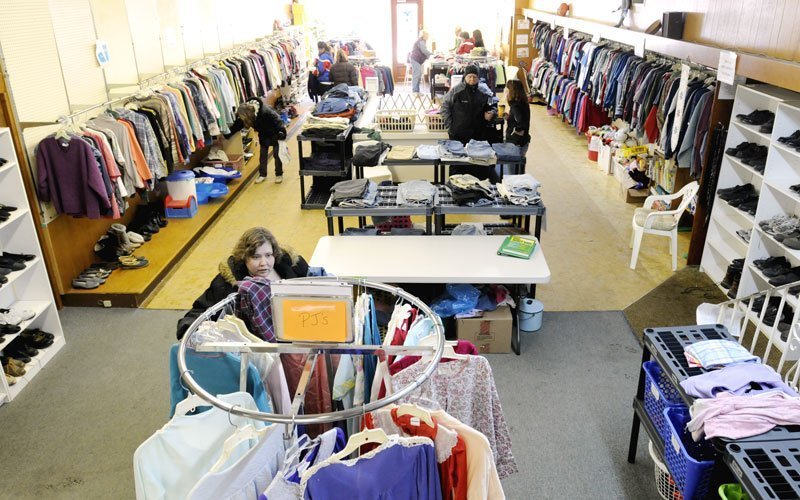 Customers and volunteers circulate throughout the Community Clothing Center in Wolcott Feb. 25.

With its racks and shelves full of neatly folded clothes sorted by size, the interior of 12019 E. Main St. in Wolcott closely resembles a typical clothing store. It differs, however, from the average clothing store in one important way — everything inside is free.

Welcome to the Community Clothing Center, an important resource for people in Wayne County and beyond who are experiencing financial difficulties, said Christine Guyette-Vienna, the center’s coordinator. Operated by Catholic Charities of Wayne County, the clothing center accepts donations of new and used clothing in good condition, which it in turn offers to those who might not able to be afford to buy clothes otherwise, she said.

The clothing center has been around for more than two decades but has gone through some extensive changes in the past few years, she added.

“The clothing closet has been in existence for 21 years. It started very small in a church basement in Rose. It bounced around a few places over the years and grew a little bit more and a little bit more. About three years ago it moved to Wolcott,” Guyette-Vienna said.

Catholic Charities of Wayne County took control of the center May 1 and expanded and rearranged its interior, she said.

“We changed the way it looked inside to make it look more like a store. We try to make it seem more like shopping. We have a changing room so the kids can try things on,” Guyette-Vienna said.

Each family that comes in to shop must first check in, or register if it’s their first visit to the center, she said. The registration process is fairly simple, and the family will be asked to provide basic information including their address, school district and the ages of the people in the household.

“That way we can track how many adults and how many children we’re taking care of,” she explained.

This type of demographic information comes in handy when Guyette-Vienna is writing grant proposals and trying to justify the center’s need for more funding, she said, noting that late last year the center received a $5,000 grant from the Wayne County Community Endowment Advisory Committee.

After checking in, families are able to wander about the center and shop for the things they need before bringing the items back to the front to be tallied. Families typically are limited to two such shopping trips per month, and there also are limits on the amount of clothing they’re allowed to take, Guyette-Vienna said. These limits are in place because the center is trying to serve as many people as possible in Wayne County and the surrounding counties, she said.

“We are strategically placed in the northwest quadrant (of Wayne County) because that’s where the most need is. Fifty-one percent of all the people that come in are all from the North Rose-Wolcott immediate area. Right now we’re serving 18 different towns,” she said.

The center also has served residents from nearby Cayuga and Oswego counties, and lately has seen an increased number of the working poor coming through its doors, Guyette-Vienna said.

“There is more of a need as the economy gets worse,” she said. “Every time I turn around there’s another family registering.”

The clothing center sometimes receives donations of new items from such companies and stores as Dollar General and Old Navy, and the center also accepts donations of used clothing that is in good condition and is not stained or outdated, Guyette-Vienna said. Donated items may be brought directly to the center or left in bins at St. Patrick Church, 52 Main St. in Macedon, or Barbara Jean’s Furniture, 4500 Route 14 in North Rose.

The clothing center is staffed by Guyette-Vienna and a core of more than a dozen dedicated volunteers from local churches, which all have been strong supporters of the center, she said.

“It’s been a wonderful ecumenical effort,” she said.

The center also provides baby items, such as cribs and strollers, for new mothers and keeps toys and books on hand for children who come in while their parents are shopping. In late summer children in registered families are allowed to choose two brand-new outfits each, and in the spring the center gathers used prom dresses, gowns and shoes to give to girls who otherwise might not be able to afford to attend their proms.

The center also works closely with the migrant community, stockpiling work clothes, bedding, dishes and small appliances to give out when the workers arrive for the season, she said.

Guyette-Vienna also strives to connect families with other community resources and organizations that may be able to help them in other ways.

“We’re just a caring, compassionate organization that really just wants to help fill a need that’s in their lives, but also help to get them to where they’re self-supporting,” she said. “I’m a firm believer in the saying, ‘Give a man a fish, he’ll eat for a day. Teach a man to fish, he’ll eat forever.’ What good am I doing if I’m just constantly handing you all kinds of clothes?”