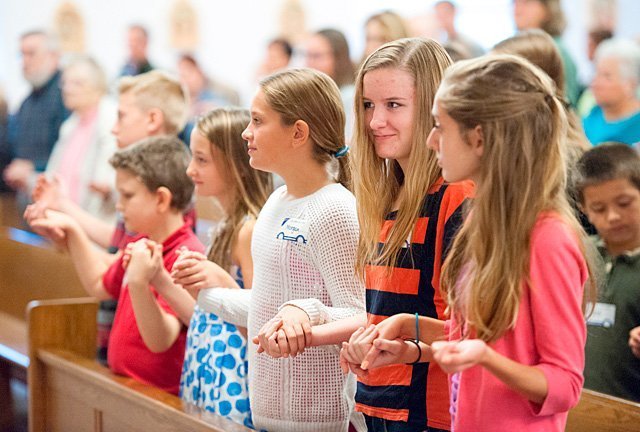 Youths join hands as they pray during an Oct. 19 Mass at Wolcott's St. Mary Magdalene Church.

WOLCOTT — Church bells rang overhead as parishioners hurried into St. Mary Magdalene Church on Oct. 5. Once inside the church doors, they were eagerly greeted by four young boys clad in their Sunday best.

Minutes later, Father Edison Tayag welcomed the congregation, noting that the first several rows on one side of the church were filled with children and teens.

"It is good to see all the kids and the youth as we celebrate our first Mass for Children and Youth," said Father Tayag, pastor of Blessed Trinity Parish, which comprises the Wolcott church as well as St. Thomas the Apostle in Red Creek and St. Jude Chapel in Fair Haven.

Seventeen young people participated in the Mass, where they served as greeters, ushers, lectors, gift bearers, altar servers and cantors, according to Maureen Mahoney, Blessed Trinity’s faith-formation coordinator. The parish plans to hold such youth-oriented Masses twice a month, she said, noting that the idea for these Masses came from the young people themselves. At a listening session held in September, Mahoney and Father Tayag asked Blessed Trinity’s young people to talk about what they’d like to see happen in their parish.

"We just tried to listen to see what they wanted to see more of in the parish. The youth said, ‘We want to be more fully involved with the Mass,’" Father Tayag said.

Father Tayag and Mahoney said they were surprised but pleased to learn the parish’s youth craved deeper involvement in the Mass. They decided to hold the new youth-oriented Masses at 10:30 a.m. because the parish’s faith-formation classes are held at 9:30 a.m. and meetings of Blessed Trinity’s new youth group begin at 11:30 a.m. on Sundays.

The youth Masses are part of a larger effort to increase Mass attendance and parish involvement. Mass attendance figures from the past few years have shown a decrease of approximately 12 people each year, Father Tayag told parishioners during his homily Oct. 5. He said parishioners can stop this trend by coming to Mass and not relying on others to boost their parish’s attendance figures, but they shouldn’t just come and sit in the pews. Instead, they must consciously try to encounter God through the Mass, he said.

"If we told everyone they were going to get an iPad here, the lines would be long. Yet every Sunday Jesus gives himself to us and they do not come," Father Tayag said. "Is anyone more important than Jesus? No. Not even an iPad, not even the priest, not even the doughnuts after Mass."

Catholics are known for sitting in the same pews week after week, so they should use this to their advantage, Father Tayag said. He suggested parishioners introduce themselves when they see faces they don’t recognize sitting near them, and inquire when they notice parishioners who aren’t there. Invite others to attend Mass, and make them feel welcome when they come, he added.

"If you have a smart phone, at the beginning of Mass text your friends. Say, ‘I’m in church. Don’t bother me for an hour,’" he said. "By doing this you are telling your friends it’s OK to go to church. You’re creating an attitude where it’s OK to welcome God."

Getting more children involved in Mass furthers the goal of increasing Mass attendance because the children’s parents likely will be in the pews as well, Father Tayag said. The pews were pretty full on Oct. 5, remarked Mahoney, who said she’d never seen so many children in the church at one time. And not only were the children in church, but they were excited about it, she added.

"I actually looked forward to doing this. I just wanted to be more involved," said 15-year-old Mia Callahan, who served as a lector during the Mass.

Playing an active role in the Mass made the experience very different from what many young people are used to, which is being forced to come and sit through Mass, added 15-year-old Gilian Hall, who also served as a lector Oct. 5. And teens who are more involved in their parishes are more likely to hang onto their faith even after they grow up and move out on their own, Mahoney added.

After the Mass ended, Mahoney learned that a teen who had been an inactive member of the parish for several years had been in church that morning, and she wanted to make her confirmation and be more active in the parish.

"That’s why we have to involve the youth," Mahoney said, tears glistening in her eyes. "They’re not just our future. They’re our everything. They’re our right now."