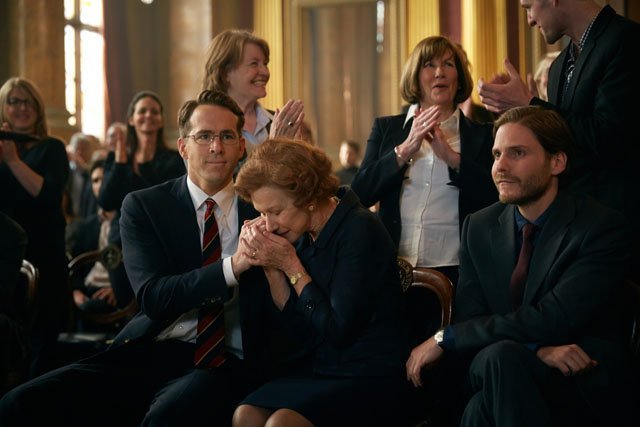 Ryan Reynolds, Helen Mirren and Daniel Bruhl star in a scene from the movie "Woman in Gold." The Catholic News Service classification is A-II -- adults and adolescents. The Motion Picture Association of America rating is PG-13 -- parents strongly caution ed. Some material may be inappropriate for children under 13.
By Joseph McAleer
Catholic News Service
NEW YORK (CNS) — The so-called "last prisoners of World War II" await justice and release in "Woman in Gold" (Weinstein).
The elegant lady of the title and three other captives profiled in director Simon Curtis’ film aren’t, in fact, human beings but exquisite paintings by the Austrian artist Gustav Klimt (1862-1918) that were stolen from their rightful owners by the Nazis. The fascinating story of the struggle for their restitution provides the basis for Curtis’ intriguing dramatization.
In 1998, Vienna-bred Maria Altmann (Helen Mirren) is living quietly in Los Angeles. The death of her sister, however, prompts Maria to resurrect long-buried issues from her past.
Maria’s well-to-do Jewish family had commissioned several paintings from Klimt, including his 1907 masterpiece, "Portrait of Adele Bloch-Bauer I." This study of Maria’s aunt — the first of two Klimt would create — was a product of the artist’s "golden phase," during which he employed not only paint, but silver and gold leaf as well.
Together with other possessions, the portrait was confiscated by Hitler’s minions as part of their persecution of Austria’s Jews. In flashbacks, we watch as the young Maria (Tatiana Maslany) and her husband, Fritz (Max Irons), manage to escape to America, leaving family and friends behind to face humiliation, torture, and, ultimately, death in concentration camps.
Flash forward, and Maria decides it’s time for a reunion with the image of her aunt — and for equity to be served. Trouble is the paintings she seeks to reclaim are hanging in a Vienna museum, and the Austrian government insists they were legally obtained.
Undeterred, Maria enlists the aid of a local attorney, Randy Schoenberg (Ryan Reynolds). Randy is young and green, but shares Maria’s Austrian roots. In fact, his grandfather was the famed composer Arnold Schoenberg (1874-1951).
The odds are stacked against this very odd couple, who travel to Vienna to meet with the authorities. There they find an ally in Hubertus Czernin (Daniel Bruhl), a nosy investigative reporter.
Given that it offers a valuable history lesson about wartime atrocities, man’s inhumanity to man and the nature of justice, "Woman in Gold" can be recommended for mature teens, despite the elements listed below.
The film contains scenes of wartime violence and a few instances each of profane and crude language. The Catholic News Service classification is A-II — adults and adolescents. The Motion Picture Association of America rating is PG-13 — parents strongly cautioned. Some material may be inappropriate for children under 13.
– – –
McAleer is a guest reviewer for Catholic News Service.
Copyright © 2022 Catholic News Service, Inc. All rights reserved. Linking is encouraged, but republishing or redistributing, including by framing or similar means, without the publisher's prior written permission is prohibited.