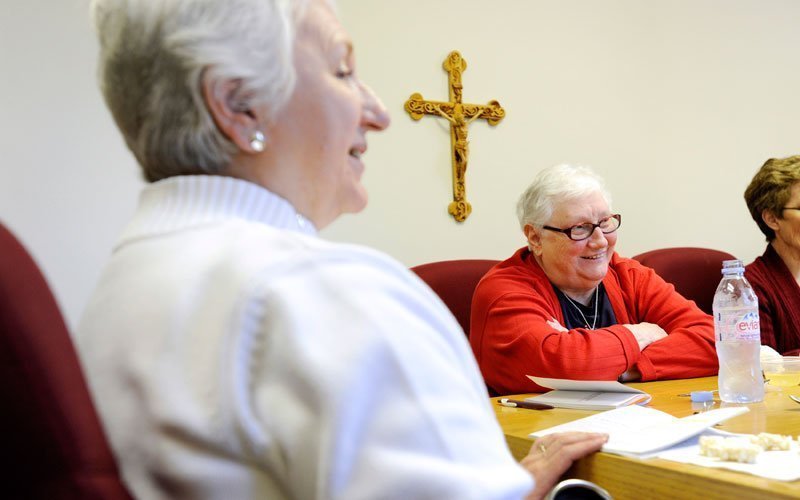 Women gather each week at St. Michael's Church in Newark for "Faith Sandwiched In," a prayer and discussion group.

Faith Sandwiched In is more than just a book club with a catchy name, according to the women who participate in it.

Rather, it’s a program that has helped women at St. Michael Parish in Newark form close friendships while learning about, sharing and expanding their faith, they said.

Pat Albrecht, St. Michael’s pastoral associate, started the program eight years ago when she invited the women of the parish to join her for a weekly lunchtime discussion of a faith-based book. Albrecht had done something similar at her former parish, St. Mary in Waterloo, and thought the women of St. Michael might enjoy such an opportunity.

“It brings the women out who are home during the day and wanting to get out for a little bit. It’s a low-stress group,” she explained.

Faith Sandwiched In caught on and has been held off and on at St. Michael for the past eight years, she said. The women who participate gather at the parish center at 11:45 a.m. on Wednesdays to discuss their most recent book selection. Max Lucado and Kent Nerburn are among the women’s favorite authors, but the group embraces other authors as well.

“If any of the women want to suggest a book, we’ll do that one. We of course like something with a touch of faith in it, (something) that would be faith-enriching for us,” Albrecht said.

The women bring their own lunches and chat over lunch before they start discussing their current book selection, said Albrecht, noting that the women meet each week while they’re reading a selection, but the group occasionally takes time off in between books. They always meet during Lent and Advent, however.

“When we don’t meet we get sort of antsy,” agreed Betty Howlett, a regular Faith Sandwiched In participant. “We need each other, and we’ve got quite a little community here.”

That sense of community is precisely what keeps some participants coming back book after book and year after year, added Ruth Mann, another longtime participant. Newcomers are always welcome, and the women who’ve joined the discussions over the years have formed strong bonds.

“I think it’s been a really good community-building opportunity. We really have come to know each other better and support each other in our walk of faith, so that’s been good. It’s a very nice group, and I think it’s been a real blessing for all of us who have come,” said Mann, who originally began participating in Faith Sandwiched In because she was eager to get to know other women in the parish.

Most of the women who attend Faith Sandwiched In are retired and at similar stages in their lives, but that’s not all they share, Howlett noted.

“The main thing we have in common is our faith in Jesus Christ,” she said.

The women often approach discussion topics from differing points of view but their shared faith binds them together. They all come up with similar answers for their discussion questions, even though each has arrived at that answer in her own way, Howlett said.

“We get some really great insights from other people,” added Ann Straight, another longtime participant.

Those insightful book discussions often turn into a springboard for discussions about other relevant topics, such as the recent implementation of the new Roman Missal, Albrecht said.

The women know that whatever they discuss will stay within the group, and that confidentiality makes them feel secure bringing up issues that make them curious or concerned, she added. These discussions have helped the women feel more secure in their faith and in their roles in the parish, Mann said.

“It’s made the parish feel more like it’s ours,” she said. “We’re part of it, it’s ours, and I think you need to have that ownership of the church.”

Faith Sandwiched In provides a low-key, relaxed way for the women of St. Michael to take a more active role in their parish, and to form lasting friendships amongst themselves, Albrecht said.

“They’re just wonderfully supportive and people of faith. And we have fun,” she said. “It’s just a good group, an easy-flowing group.”