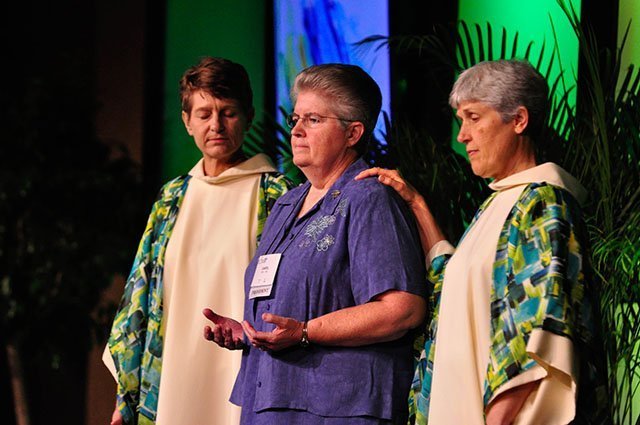 Sister Carol Zinn, a Sister of St. Joseph, who is president of the Leadership Conference of Women Religious, receives a blessing before her Aug. 12 address at the annual LCWR assembly held in Nashville, Tenn., Aug. 12. LCWR members represent about 80 percent of the 51,600 women religious in the country.

NASHVILLE, Tenn. (CNS) — Religious congregations must evolve to meet the needs of a changing society and church, Sister Carol Zinn, president of the Leadership Conference of Women Religious, told members of the organization during its annual assembly Aug. 12-15 in Nashville.

"Religious life is always a radical response to the Gospel in a particular historical and cultural context. It is always a response to where you are, making the Gospel present where we are," Sister Carol said after delivering her presidential address Aug. 13, the first full day of the assembly.

"I want us to be clear about where we are," the Sister of St. Joseph added.

LCWR has about 1,400 members who are leaders of their orders in the United States. The members represent about 80 percent of the 51,600 women religious in the country.

Many of the congregations of women religious among the LCWR’s membership are becoming smaller and their members are aging, Sister Carol noted. At the same time, the Catholic Church in the United States is changing along with the needs of the laity and people in society at large.

"When many of us started in religious life, our congregations were serving in an institutional way," running schools, hospitals and other large institutions, Sister Carol said. "That’s shifting. We’re not doing the shifting, God is."

Religious congregations might have to change how they live their charisms, she said. "It might not be consecrated life the way we’ve lived it."

LCWR’s role is to help the leaders of congregations of women religious lead their communities during this time of change, Sister Carol said.

The organization held its annual assembly under the continuing doctrinal assessment by the Vatican’s Congregation for the Doctrine of the Faith, which cited "serious doctrinal problems which affect many in consecrated life." The assessment called for the organization’s reform to ensure its fidelity to Catholic teaching in areas including abortion, euthanasia, women’s ordination and homosexuality.

Archbishop J. Peter Sartain of Seattle was appointed to implement the doctrinal assessment by providing "review, guidance and approval, where necessary, of the work" of LCWR.

LCWR is expected to release a statement after the board meeting.

In his remarks during the opening session, Archbishop Sartain told the 800 women in the audience he was there "to be with you as a brother and a friend."

"We come because the Lord has called us and the Lord has sent us," Archbishop Sartain said. "That is what unites us in our faith. … I know this is fertile ground for us to discuss our love of God."

In the letter, the cardinal posed questions he is asking all men’s and women’s religious orders to contemplate as they prepare for the Year of Consecrated Life, which will begin Nov. 30.

Among the questions are:

— "At what point are we to return to the source of every form of Christian life and to the founding charisms of our institutes?"

— "Are our institutes adapting in an evangelical way to changing conditions?"

— "Is following Christ, as taught by the Gospels, the fundamental norm?"

— "Are we faithfully observing the spirit and names of our founders and foundresses so as to preserve their charism?"

— "Are obedience and authority dimensions of a life of true fraternity among us, or do they remain instruments of power and enslavement, perhaps disguised by unhealthy spirituality?"

In her presidential address, Sister Carol drew on the assembly’s location in Nashville, known throughout the world as Music City, for inspiration.

"This assembly comes at a time when our consciousness is increasingly heightened to the lamentations of our world, country, church and vocation," she said. "And we are called to stand in those lamentations singing the music in God’s heart. As we begin this significant and important assembly, may we know where we really are, who we really are, and who we’re really called to become."

Religious life continues to evolve, as it has throughout history, Sister Carol said.

"We look to the Gospel to see how this life is lived and we learn that the main melody is the life, death and resurrection of Jesus Christ. Nothing more and nothing less," she said.

"What would religious life look like if we were to harmonize our charisms anew that freed us to live this life more fully, more creatively, more boldly, more at the periphery?" Sister Carol asked. "Could it be that the divestment of buildings, ministries, land, provinces and even congregations is the prelude to a new harmony?"

"In both formal and informal interviews, with impassioned clarity, Pope Francis identifies what that joy born anew looks like as it stands in the lamentations," she added. "Discernment is a way of life. Community matters. Relationships come before anything and everything else. The church serves as a field hospital welcoming all. Consecrated life is to wake up the world with its mystical and prophetic presence. The co-essential dimensions of ecclesial communion are the hierarchic and the charismatic."

Sister Carol encouraged the leaders of religious communities to be receptive to the changes in the world, the Church and their congregations. "All that we know about this life must be held lightly so conversion of worldview, ideology, ecclesiology and theology of this life in view of the God of the future can emerge."