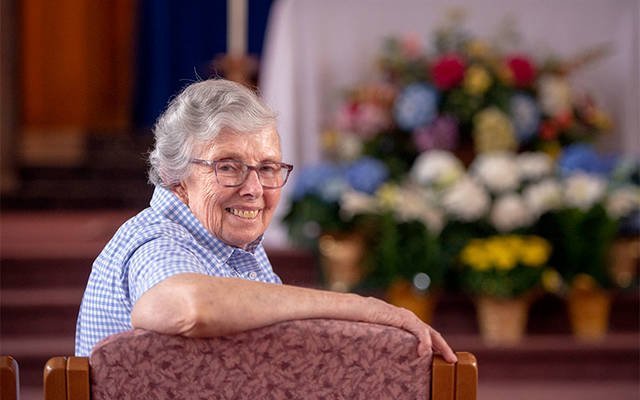 A raised eyebrow. A quizzical look. And questions. Lots of questions.

Those are the reactions Sister St. Luke Hardy typically received when she told people she worked in real estate.

“People would say, ‘You’re kidding. Can a sister be a real estate agent?’” Sister Hardy recalled.

She couldn’t really blame people for such reactions, however. Sister Hardy had had a similar reaction when Sister of St. Joseph Sheila Walsh originally invited her to join her real estate agency, Sheila Walsh Realty Inc.

“I laughed right out loud. I said, ‘I didn’t like selling candy bars when I was in high school. I don’t think I want to be selling houses,’” said Sister Hardy, who’d previously taught and served in ministries based at local parishes and at the Sisters of St. Joseph motherhouse.

Yet her protests didn’t deter Sister Walsh, who explained what Sister Hardy would eventually learn for herself.

“Real estate is not about selling and buying. It is about walking with people who are doing one of the biggest, most important things in their lives,” said Sister Hardy, who over the course of 15 years helped young people looking for their first homes, couples looking for places to start their families, and older couples downsizing and selling their family homes. “What you’re doing is walking with people through their emotions. You need to advocate for them, educate them in all they need to do so they have a safe sale.”

Her years as a real estate agent made Sister Hardy realize that sometimes the most important part of a ministry is the vehicle it provides. Real estate sales provided a vehicle for her to form connections with people she might not have otherwise encountered, Sister Hardy said.

“It’s a way of connecting with people, helping people, and it just goes from there, so it doesn’t really matter what the job is, in that kind of sense. It’s a way of being with and for people,” she said.

Sister of Mercy Anne Marie Mathis made a similar discovery when she traveled to South America in the early 1980s. She’d been teaching since 1963, and in 1983 she and a fellow teacher traveled to South America for a program called “The Third World Experience” to learn how Sisters of Mercy were serving there and what the people were like. By the time she returned home five weeks later, she had decided to stop teaching in local Catholic schools and instead minister to the people she had felt drawn to in South America.

“The people there were just so concerned with one another. They were so welcoming and generous,” Sister Mathis said, recalling the time she witnessed a woman give away cheese that had been the lone item in her refrigerator. “We’re generous, but we give from our extras. They were giving from what they had, and they had nothing more.”

In 1985, Sister Mathis traveled to Bolivia, where she studied Spanish, then continued on to Chile, where she spent the next 32 years. In Chile, she visited sick and elderly people who were unable to leave their homes and rarely had visitors.

“I took Communion to those who wished to receive it, and if they didn’t care to receive it, we’d just spend a little bit of time just talking,” she said.

Although the work she did in Chile differed significantly from her service as a teacher in the Diocese of Rochester, both ministries share a common core.

“You’re helping others, spreading Christ to others. It was an opportunity to do what Christ wanted all of us to do,” Sister Mathis explained.

Local women religious have found a wide variety of ways to spread Christ to others. Mercy Sister Julia Norton, for example, worked as a teacher and a principal in Catholic elementary schools before jumping into parish ministry, primarily in urban parishes and with members of Rochester’s Hispanic Catholic community. Many of the people she’s ministered to have been poor immigrants, which has enabled Sister Norton to live out her congregation’s vow of service to the poor, she said.

“I have had a fulfilling life, able to live out what I felt was my calling and have been challenged to develop and use my gifts in community and ministry,” said Sister Norton, who currently is director of the Sister Regis Food Cupboard in Rochester’s inner city.

Any ministry can be pastoral if it involves working with others and helping others, added Sister of St. Joseph Joan Sobala. Like Sisters Hardy, Mathis and Norton, she began teaching shortly after entering religious life. Most women who entered religious communities at that time either went into teaching or nursing, so she had always expected to become a teacher, she recalled.

“I taught for nine years. Frankly, I felt that was where I was going to keep my energy, but God and the Holy Spirit have this way of nudging us to do things. The next thing I knew, I found myself in campus ministry,” Sister Sobala said.

Over the next few years she served as a pastoral administrator at local parishes, helped found the Downtown Community Forum based at St. Mary Church in downtown Rochester, and hosted a weekly radio show called “Good Morning God.” She currently coordinates a program called Fresh Wind In Our Sails, which provides opportunities for people to share experiences and insights about spiritual topics.

Pastoral ministry is anything that makes people more aware of how much God loves them, Sister Sobala said.

“The basic thing for me is always working with people,” she said. “People are on a journey with God, and somehow when our lives intertwine even a little bit, I find that it’s a gift, I hope for them and certainly for me.”