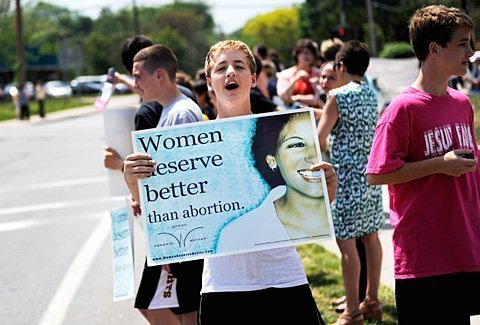 Ninth-grader Nicholas Gilges was among 25 McQuaid Jesuit High School and middle school students who took part in a May 22 protest rally in opposition of the abortion component of Governor Andrew Cuomo's Women's Equality Act.

Pro-life groups are finding a bittersweet victory in the successful effort June 21 to block a vote in the state Senate on a bill they say would have expanded abortion rights in New York.

Though the Senate passed nine bills with protections for women on issues ranging from domestic violence, human trafficking, sexual harassment, and housing, pay and pregnancy discrimination during the last day of its session, the state Assembly leadership refused to reconvene to consider those bills piecemeal without the abortion legislation. This effectively torpedoed all the components of the legislation that had comprised Gov. Andrew Cuomo’s 10-point Women’s Equality Act.

State Sen. Dean Skelos (R-Rockville Center), who also is Senate coleader, blocked an attempt to bring to the floor Cuomo’s 10th point, which proposed changes to the state’s abortion laws. According to pro-life groups, Cuomo’s proposal would have guaranteed the right of a woman — no matter how far along in a pregnancy — to have an abortion in cases where her life or health were at risk. Advocates noted that courts have broadly interpreted the phrase "life or health" to include age, economic, social or emotional factors.

The state Assembly previously had passed a bill with all 10 components. Following the Senate vote on June 21, Assembly Speaker Sheldon Silver (D-Manhattan) refused to bring the nine women’s rights components to the floor without the abortion component included, effectively blocking all the proposed legislation from passing.

"We are certainly excited that abortion is not expanded in New York state," said Carol Crossed, a board member of Democrats for Life of New York. "Having said that, in Feminists Choosing Life, we are disappointed that the nine points, including sex trafficking, equal pay for equal work and housing fairness were not voted on (in the state Assembly). This is basically because of the Democratically controlled Assembly that wants all or nothing."

On June 22, the New York Women’s Equality Coalition, which drafted the original 10-point plan, called on the state Assembly to reconvene to pass the nine components of the women’s agenda that had passed the state Senate.

"Parliamentary procedures will not stop the Coalition from working toward its goal of seeing these new policies in place and positioning New York as a leader in advancing women’s equality," said a statement from the group. "Every hour that goes by keeps women waiting for the relief they deserve. Women need immediate relief, and the Coalition calls on the Assembly to act now to provide that relief."

The coalition also criticized the state Senate for what it said was a failure to codify Roe v. Wade into New York law, on the chance that policies might change at the federal level. Yet pro-life groups have contended that the coalition’s proposal would effectively expand abortion in the state. The New York State Catholic Conference, which represents the state’s bishops on matters of public policy, has noted that the coalition’s proposal failed to codify federal court decisions that subsequently modified Roe v. Wade and allowed some limits to be placed on abortion.

The Catholic conference said the outcome was a "remarkable victory for unborn children, as well as vulnerable women and girls who so often face unrelenting societal and family pressure to abort. The result is, quite literally, the answer to prayer."

The Catholic conference also said that the protections for victims of sexual harassment, domestic violence and human trafficking were used "as a pawn to pass (abortion) legislation that cannot stand on its own."

Changes to the state’s abortion laws have been pending before the Senate and Assembly for several years. Both the Catholic conference and Cuomo say the issue will be an election issue during November.

"This is all discussion that is going to continue until we have an election," Cuomo said June 17 on the radio show "The Capitol Pressroom."

The Catholic conference predicted legislators who support abortion would be unsuccessful at the polls.

"The overwhelming majority of New Yorkers, including those who say they are ‘pro-choice,’ are disgusted by late-term abortion and are shocked that abortion clinics would seek to employ non-doctors to perform surgical procedures on women and girls," the Catholic conference stated. "We will continue to stand up for innocent human life from the moment of conception until natural death, and we continue to pray for our opponents that their eyes may be opened to the evil of abortion."