Won't Back Down - Catholic Courier 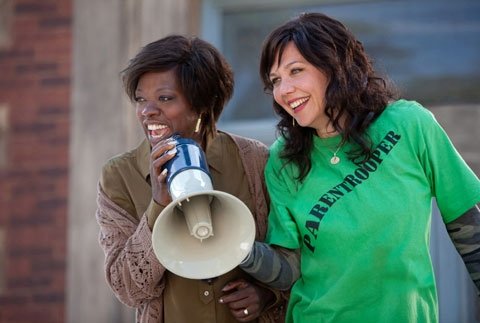 NEW YORK (CNS) — It may sound like a Bruce Willis action thriller, but "Won’t Back Down" (Fox) is anything but. Still, this David-vs.-Goliath story of two single mothers who join forces to save a failing public school from a wicked bureaucracy packs an emotional wallop.

Directed by Daniel Barnz ("Beastly"), who co-wrote the screenplay with Brin Hill, "Won’t Back Down" is based on a California law that enables parents and teachers to take control of their public school, turning it into a charter school. The film switches the location to the gritty streets of Pittsburgh and the fictional John Adams Elementary School, officially graded "F" by the local school board.

Nona (Viola Davis) is a once-vital teacher who has been beaten down by the system, simply going through the motions and passing her failing students on to the next grade. Her depression is compounded by the breakdown of her marriage and the problems of her son, Cody (Dante Brown), who is learning disabled and not getting enough attention in his own public school.

Facing a similar plight is Jamie (Maggie Gyllenhaal), a single mother with a dyslexic child, Malia (Emily Alyn Lind). Although in the third grade at Adams, Malia cannot read, and her "zombie" of a teacher, protected by tenure, couldn’t care less, driving Jamie wild. Unable to afford the tuition to transfer Malia to a private school, Jamie fells trapped, desperate that her child has a chance to escape poverty through a good education.

Jamie takes her frustration to the local school board, where she learns about the charter school law. She’s also warned about the mighty opposition to change from the powerful teachers’ union, headed by Evelyn (Holly Hunter).

With a natural charm, spitfire determination, and an unwavering belief in people power, Jamie goes on the offensive, lobbying parents and teachers with the war cry, "Just Say Know." She partners with Nona to begin the lengthy application process, and brings on board the popular music teacher, Michael (Oscar Isaac). He puts in extra credit as Jamie’s love interest and Malia’s babysitter.

It all leads to a showdown with the school board, chaired by the mercurial Olivia (Marianne Jean-Baptiste). She warns Nona that her efforts are doomed.

"Do you know the moral of the Icarus story?" Olivia asks.

"Won’t Back Down" paints with a broad brush, and the caricatures of incompetent teachers and evil union bosses are extreme. They serve to push the film’s agenda of school choice, which will resonate with any parent today.

With Nona regaining her teaching mojo and inspiring her ragtag students, "Won’t Back Down" resembles the 1967 classic "To Sir With Love," with Davis in the role immortalized by Sidney Poitier. Instead of Lulu warbling the title song, we have Tom Petty crooning, "No I won’t back down/You can stand me up at the gates of hell/But I won’t back down."

Indeed, "Won’t Back Down" shows that hell hath no fury like a public school parent or teacher scorned.

The film contains some intense emotional moments. The Catholic News Service classification is A-II — adults and adolescents. The Motion Picture Association of America rating is PG — parental guidance suggested. Some material may not be suitable for children.