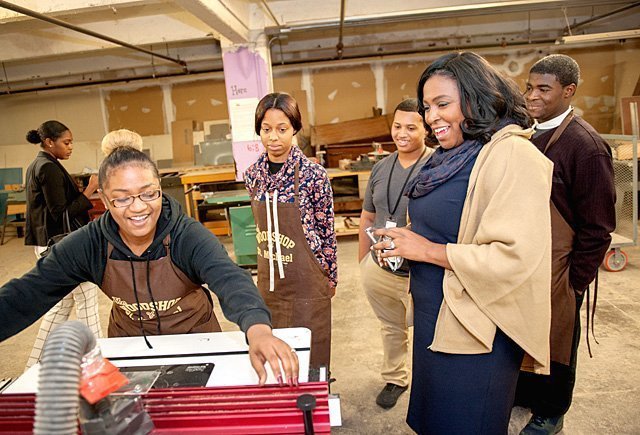 Rochester Mayor Lovely Warren (front right), gets a tour of Woodshop of St. Michael courtesy of Carena Sanchez (from left), Chaquasia Williams, Wilberto Martinez and Noah Jackson Dec. 1. Mayor Warren visited the woodshop to thank the students for their work on bookshelves that will be used as part of the city's Story Time with Style initiative.

ROCHESTER — Woodshop of St. Michael marked some major milestones in 2015, including a new name and incorporation as a nonprofit organization.

The year also ended with a big finish, as the woodshop played an important role in a new reading initiative, Story Time with Style, which was announced last month by Mayor Lovely Warren.

Eight of the students from the woodshop accompanied Warren Dec. 2 when she introduced the program at Forte Styles Beauty Shop on Thurston Road. She said the students, staff and volunteers at the woodshop served as "great partners" in promoting reading among city children by creating 10 bookshelves to be placed at city barbershops and beauty salons. The shelves will hold books that were either donated or purchased with grants, and children will be able to read while they are awaiting haircuts.

Warren said that more such literacy programs are needed, in light of recent data from the state department of education showing that only 4 percent of African-American and 3 percent of Latino students in the city are reading proficient by the third grade. Students who are proficient readers by that grade are more likely to graduate from high school, she added.

For their part in fostering reading proficiency in children, the woodshop students received certificates from Warren on Dec. 2 that read in part: "Your time and talent are helping foster a love of reading in our youth."

"The whole community is coming together to help with this," Warren said of the reading initiative, noting as an example the students she visited at the woodshop Dec. 1 who were working on the city’s order of 15 additional shelves.

As one of 10 children in his family, Wilberto Martínez, 17, said that he was happy to be part of a project that will help younger kids, including his own siblings.

He has been working at the woodshop for four years and is proud to be a crew chief. The students are divided into construction and finish teams, which also provides them with leadership training, explained James Smith, the woodshop’s director.

The shelves took about two weeks to complete, since the students work a couple of hours a day after school, said Wilberto, who added that he enjoys the work.

"My friends are all there," he added. "Every day, I learn new stuff."

The woodshop also helps keep the students involved in positive activities, added Chaquasia Williams, 16. She painted many of the shelves as part of the finish team. 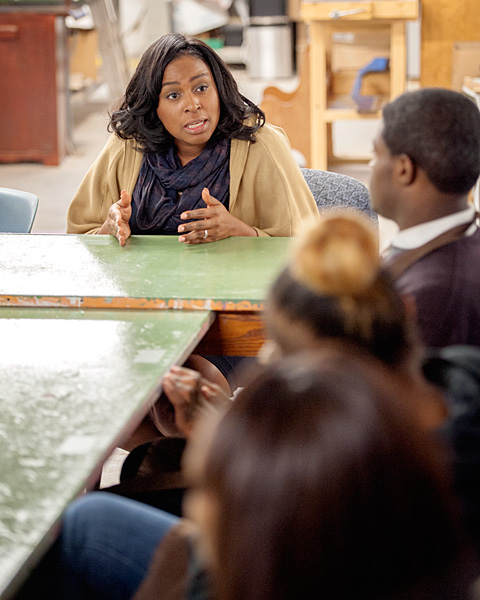 Rochester Mayor Lovely Warren fields questions from students at Woodshop of St. Michael during her Dec. 1 visit. Warren sat with the group of teens for about an hour, answering questions and giving them advice.

"It helps me in life," she said of going to the woodshop. "It makes me do better things after school instead of wasting my time."

Being involved in the mayor’s project also means they are helping other kids, added Carena Sánchez, 16.

Smith said that the woodshop became involved in the reading initiative through its affiliation with Shelley Matthews, the Rochester Public Library’s literacy coordinator. The woodshop’s students make shelves for a "little library" program that Matthews runs, and she also connected them with the Lions Club to make 60 bookshelves for a group of second-graders last year and bins for the club’s used eyeglasses collection sites, he added.

The students also made 2,000 Christmas ornaments for Marcia Mendola, coordinator of the World Hunger Task Force-Haiti at St. Louis Parish in Pittsford. Proceeds from selling the ornaments at Pittsford-area stores will go to the only pediatric hospital in Haiti, Carena said. This is the first year that the woodshop students were asked to assist with the project, said volunteer Patricia Cost.

The projects not only fulfill part of the woodshop’s mission to encourage community service, but also prove that the woodshop’s name is becoming more well-known in the community, Smith said.

"Any project we can take into the woodshop does things for other people in lesser position than our own students themselves and helps raise (students’) awareness and self-esteem," he added.

Getting the woodshop’s name out there, especially since it has changed from St. Michael’s Woodshop to the Woodshop of St. Michael, will be even more important now that the program has evolved from a ministry of Fairport’s Church of the Assumption to its own nonprofit status, Smith said.

EDITOR’S NOTE: For more information about the locations for Story Time with Style, visit http://cityofrochester.gov/storytimewithstyle/.