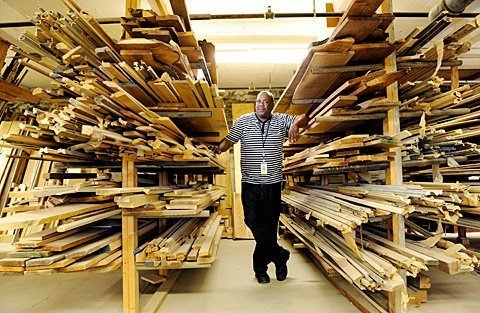 James Smith, the new director of St. Michael's Woodshop, says the ministry will aim to give students carpentry skills they can use to forge careers.

But more importantly, the woodshop alumnus said he learned how to work with others and how to be open-minded and patient.

Now entering his junior year at Rochester Institute of Technology, where he is majoring in criminal justice with a concentration in Spanish, Campbell said he first learned about the woodshop from several Sisters of Mercy who had taken care of his family in the Rochester foster care home Andrew’s Center. At one time, woodshop participants built the cabinets in the renovated convent that houses Andrew’s Center, and they kept the foster care home supplied with toys and other items.

He said he is glad to know that this month the woodshop will be reopening after a leadership transition. The Sisters of Mercy recently handed over its sponsorship of the woodshop to Church of the Assumption in Fairport and St. Frances Xavier Cabrini Parish in Rochester.

The woodshop, which offers woodworking programs after school and during the summer, dates back to 1967, when Mercy Sister Patricia Flynn opened the ministry to teach at-risk teens carpentry skills and give them work experience.

The ministry has had a series of homes: the Sister of Mercy’s former Joseph Avenue outreach center, the basement of a nightclub and a building on the parish grounds of St. Michael Church. In September 1984, the building that housed the woodshop burned down, destroying all the woodshop’s tools and materials.

Yet after the fire, Sister Flynn reopened the woodshop in the former St. Michael School, and the program later moved into a 6,000-square-foot space in the basement of the former Bausch and Lomb building on St. Paul Street. After Sister Flynn retired in 2007, Mercy Sister Virginia Taylor took over operation of the shop. Sister Flynn died in March 2011, and Sister Taylor died in September 2012.

Dormant for several years, St. Michael’s Woodshop also is marking the arrival of a new executive director, James Smith, who previously worked in youth ministry and in maintenance at the former Light of Christ Parish, which comprised St. Andrew Church and Church of the Annunciation.

Smith said he was trained as a skilled painter and welder and envisions the woodshop program as providing life skills and employment training in addition to teaching woodworking and picture framing, shop safety, the use of tools and woodworking skills ranging from identifying wood to measuring and cutting accurately. He said he will build on the legacy of the Sisters of Mercy.

"This is a continuation of the hard work and an appreciation of the Sisters of Mercy and the work they put into this," Smith said.

He will link students’ performance and attendance with a small stipend to produce students who are ready to become woodworkers or carpenters. He said he will also draw on his own life experiences to encourage participants to finish school and get jobs.

"I had a troubled past where I was involved in the streets for a number of years, and I ended up with a prison term," Smith said.

During his incarceration he turned his life around and learned welding. Yet when he got out and attempted to start a job as a welder in 2003, he learned that he would need to by $3,000 worth of his own tools. In desperation, he appealed to Sister of St. Joseph Sue Hoffman, then the pastoral administrator of Church of the Annunciation. Rather than give him the money, she hired him to do parish maintenance. Staff at the parish gradually discovered his many hidden talents, such as how well he related to youths and his black belt in karate, which he used to assist with a karate program. Smith said he was saddened when parish changes ended those youth programs.

"I guess things happen for a reason, and maybe this was God’s plan in the long run," he remarked.

He said additional volunteers and mentors are needed so that the woodshop can serve more young people. The program currently only has six to eight spots available for students, but more than 20 have been referred and have expressed interest, he said.

"We can serve at least 20 to 25 students if we have the people and the funding," he said.

The more students who are served, the more lives that are changed, noted the woodshop’s board chairman, Jerry Korn, a member of the finance council of the Church of the Assumption and a vice president of mortgage finance at Home Properties. He pointed out that the shop is located in the same building as the Monroe County Department of Social Services.

"When you walk in (this building), you see the lines of folks at welfare, and then you come down here," Korn said. "We take people out of that line."