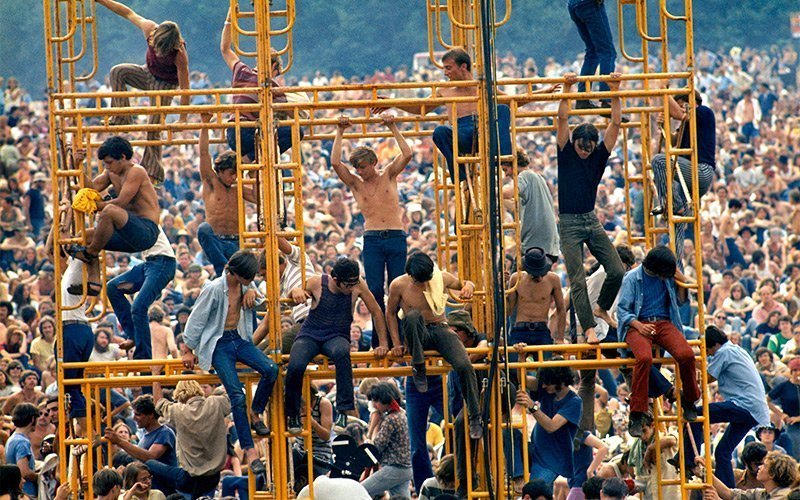 The unrealized and underwhelming documentary premieres on PBS as part of the “American Experience” series Tuesday, Aug. 6, 9‚Äì11 p.m. EDT. But broadcast times may vary, so viewers should consult their local listings.

Barak Goodman directed “Woodstock,” along with Jamila Ephron. He also collaborated on the script with Don Kleszy. Goodman’s 12 previous “American Experience” films include 2017’s “Oklahoma City,” a Peabody Award-winning look at the 1993 domestic terrorist bombing in that city.

This documentary’s first 40 minutes or so recall how the titular concert — held on a dairy farm in central New York Aug. 15-18, 1969 — came into being. It involved an unlikely partnership among John P. Roberts and Joel Rosenman, the founders of Manhattan recording studio Mediasound, drug paraphernalia entrepreneur Michael Lang and Capitol Records vice president Artie Kornfeld.

Free-spirited, unconventional Lang and Kornfield wanted to establish a recording studio in Woodstock, which lies in the Hudson Valley about 100 miles north of New York City. Brooklyn native Lang had recently adopted the artsy community as his hometown.

They reached out to Roberts and Rosenman because, in the three years since establishing Mediasound using a $250,000 inheritance Roberts had received, the latter duo had managed to make the business a success.

Lang and Kornfield’s proposal to have a concert to celebrate the new studio’s opening intrigued the veteran producers, with the result that, in Roberts’ words, “the four of us shook hands and started brainstorming what Woodstock could be.”

The event was to have been held in Wallkill, an hour or so south of Woodstock. But citizens there balked at the prospect of a huge crowd of hippies invading and overwhelming their hamlet of 1,900 souls — which left the promoters scrambling to find a new location. They gained an unlikely ally in Bethel, New York, dairy farmer Max Yasgur (1919-1973).

As fellow Bethel resident John Conway explains, Max was “a law-and-order Republican, but he also believed in personal freedom and expression; that’s what he hung his hat on.” And this conviction prompted him to lease one of his fields to the organizers.

Then again, the term organizers may be overly generous. As the filmmakers point out, the producers’ frantic search for a new venue was a harbinger of the chaos and dysfunction that was to mark just about every aspect of the four-day countercultural revel.

The sheer volume of young pilgrims descending on a town of 2,800 created a massive traffic jam, which entailed the use of helicopters to get performers to the concert stages. Arriving before the other acts, African American rhythmic guitarist Richie Havens (1941-2013) became an accidental opening act.

The sight of Havens’ improvising on his anthem “Freedom” in an effort to mollify the crowd — and disguise the fact that there were no other acts waiting in the wings — provides one of “Woodstock’s” more memorable moments.

The movie’s portrayal of the hippie lifestyle puts it, perhaps predictably, outside the realm of family programming. Besides depictions of drug use, including overdoses, there are discussions of casual sex and birth control, though nothing explicit is displayed. Full nudity outside a sexual context is shown, however, and in a manner that feels gratuitous.

“Woodstock” also deals with the tumult of the times: the Vietnam War and political assassinations. And participants occasionally employ vulgar language.

The documentarians make excellent use of archival footage and magnificent still photos, giving viewers the sense that they’re in the midst of the remarkable scene.

Yet, in a move that seems admirable in theory but turns out to hobble the film, they include commentary from representative, everyday people who attended the event. The resulting recollections are neither particularly original nor especially insightful.

Believers watching “Woodstock” will also be struck by the fact that no reference is made to the dark forces the era unleashed. The misguided values the counterculture promoted caused abortion, divorce and narcotics-abuse rates to soar.   Visually satisfying but lacking a balanced narrative or a fresh approach to its oft-treated subject, “Woodstock” lands with a bit of a thud.