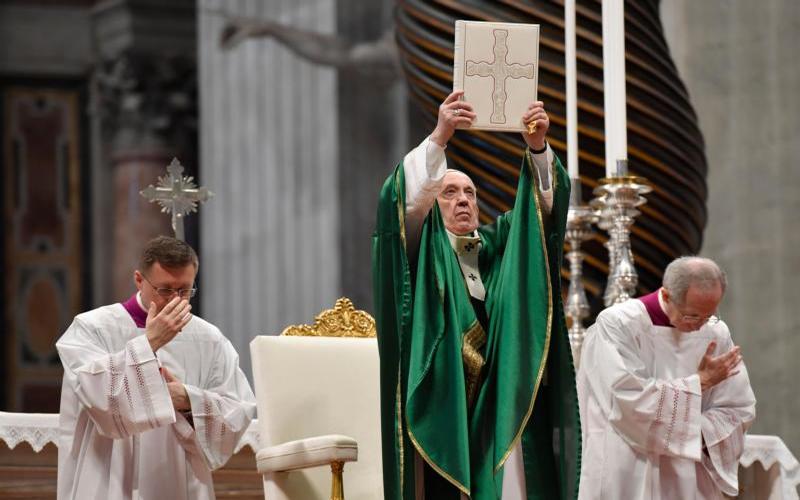 Pope Francis holds up the Lectionary, or book of Mass readings, that was used during the Second Vatican Council. The special lectionary was part of the celebration in St. Peter's Basilica Jan. 26, 2020 (CNS photo by Vatican Media)

VATICAN CITY (CNS) — God’s saving word doesn’t seek pristine and safe places to reside but instead goes in search of the dark corners of people’s lives that it can brighten, Pope Francis said.

By taking his ministry to the “periphery” of Galilee, Jesus proves that God “wants to visit the very places we think he will never go,” the pope said in his homily Jan. 26 during Mass in St. Peter’s Basilica.

Jesus “is not afraid to explore the terrain of our hearts and to enter the roughest and most difficult corners of our lives. He knows that his mercy alone can heal us, his presence alone can transform us and his word alone can renew us,” he said.

The Mass marked the first Sunday of the Word of God, an annual celebration Pope Francis has set for the third Sunday in Ordinary Time.

In his Sept. 30 declaration of the day, the pope said it would be devoted “to the celebration, study and dissemination of the word of God,” which will help the church “experience anew how the risen Lord opens up for us the treasury of his word and enables us to proclaim its unfathomable riches before the world.”

Before the Mass ended, the pope handed copies of the Bible to people representing various professions and states of life, including cardinals, religious leaders, refugees, children and men and women with disabilities.

In his homily, the pope reflected on the Sunday Gospel reading in which Jesus preaches in Galilee, calling on the people to repent and inviting Sts. Peter and Andrew to follow him.

Jesus’ call for people to “repent, for the kingdom of heaven is at hand,” is a reminder that “God is not far from us” and that he “has torn down walls and shortened distances,” the pope said.

“We ourselves did not deserve this: he came down to meet us. Now this nearness of God to his people is one of the ways he has done things since the beginning, even in the Old Testament,” he said. “And this nearness became flesh in Jesus.”

God, he continued, did not take on “our human nature” out of duty but out of love because “one embraces what one loves.”

While Christ also chooses to enter the darkest recesses of one’s heart, the pope said that many times, “we are the ones who close the door, preferring to keep our confusion, our dark side and our duplicity hidden. We keep it locked up within, approaching the Lord with some formal prayers, wary lest his truth stir our hearts. And this is concealed hypocrisy.”

Nevertheless, he added, Jesus enters the hearts of men and women in the same way he passed through the “varied and complex region” of Galilee in order to heal and call people to follow him.

“To follow Jesus, mere good works are not enough; we have to listen daily to his call,” Pope Francis said. “He, who alone knows us and who loves us fully, leads us to put out into the deep sea of life. Just as he did with the disciples who heard him.”

After celebrating Mass, the pope greeted pilgrims in St. Peter’s Square for his Sunday Angelus address.

Volunteers from UNITALSI, an Italian Catholic pilgrimage association that brings the sick and volunteers together for prayer and pilgrimages to Lourdes and other Marian shrines, handed free bibles to the pilgrims.

The pope thanked the volunteers, as well as local dioceses and communities who proposed initiatives to promote “the centrality of Holy Scripture in the life of the church.”

The Sunday of the Word of God, Pope Francis said, was instituted “to better celebrate and receive always the gift of the word that God has made and gives daily to his people.”