World leaders must not use pandemic for political gain, pope says - Catholic Courier 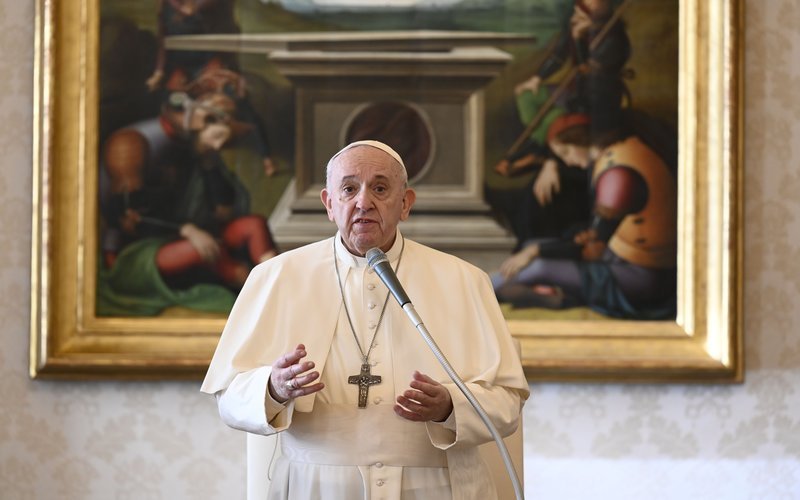 Pope Francis leads his general audience in the library of the Apostolic Palace at the Vatican Nov. 18, 2020. (CNS photo via Vatican Media)

VATICAN CITY (CNS) — Government leaders and authorities must not exploit the COVID-19 pandemic to discredit political rivals but instead set aside differences to find “viable solutions for our people,” Pope Francis said.

In a video message Nov. 19 to participants at a virtual seminar about the coronavirus pandemic in Latin America, the pope said leaders should not “encourage or endorse or use mechanisms that make this serious crisis a tool of an electoral or social nature.”

“Discrediting the other only succeeds in destroying the possibility of finding agreements that help alleviate the effects of the pandemic in our communities, especially on the most excluded,” the pope said.

“We all know the dynamics of the corruption that goes on in this area. And this is also true for the men and women of the church,” the pope said.

Corruption within the church, he said, is “a true leprosy that sickens and kills the Gospel.”

The Nov. 19-20 virtual seminar, titled, “Latin America: Church, Pope Francis and scenarios of the pandemic,” was sponsored by Pontifical Commission for Latin America, as well as Pontifical Academy of Social Sciences and Latin American bishops’ conference, commonly known as CELAM.

In his message, the pope expressed his hope that initiatives like the seminar would “inspire paths, awaken processes, create alliances and promote all the mechanisms necessary to guarantee a dignified life for our people, especially the most excluded, through the experience of fraternity and the building up of social friendship.”

The poorest people are the key for interpreting and understanding the fault or benefit of any response, he said. “If we don’t start from there, we are going to make mistakes.”

The effects of the COVID-19 pandemic, he continued, will be felt for many years to come and solidarity must be at the center of any proposals to alleviate people’s sufferings.

Any future initiatives should be “based on contributing, sharing and distributing, not on possessing, excluding and accumulating,” the pope said.

“Now, more than ever, it is necessary to regain consciousness of our common belonging. The virus reminds us that the best way to take care of ourselves is by learning to care for and protect those around us,” he said.

Noting that the pandemic “amplified” existing socioeconomic problems and injustices in Latin America, the pope said that many people, especially the region’s poorest, are not guaranteed “the necessary resources to carry out the minimum measures of protection against COVID-19.”

Nevertheless, Pope Francis said that despite “this gloomy panorama,” the people of Latin America “teach us that they are people with souls who know how to face crises with courage and know how to generate voices that shout in the desert to pave the way for the Lord.”

“Please, let us not allow ourselves to be robbed of hope!” he exclaimed. “The path of solidarity as well as justice is the best expression of love and closeness. From this crisis, we can come out better, and this is what so many of our sisters and brothers have witnessed in the daily giving of their lives and in the initiatives that the people of God have generated.”