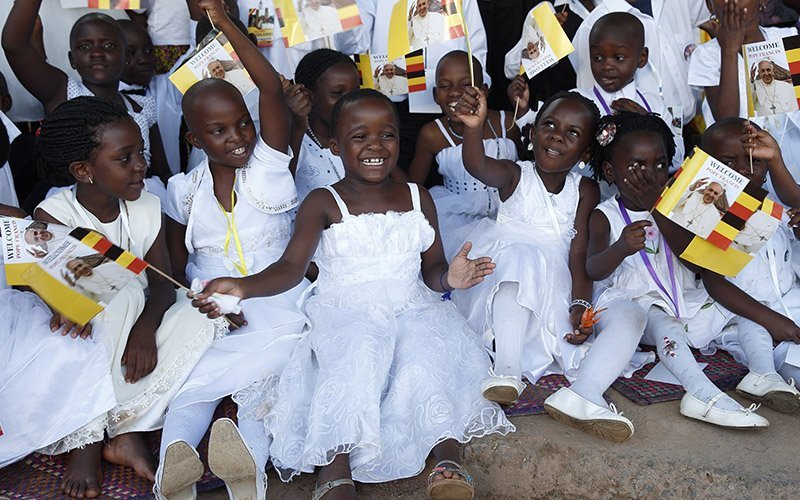 Children sing and wave flags before Pope Francis' meeting with priests, religious and seminarians at the cathedral in Kampala, Uganda, Nov. 28, 2015. (CNS photo by Paul Haring)

When Catholics are asked to support the missions with prayers, financial resources or direct, hands-on service, we might feel as if we’re the ones who are doing all the giving.

Ask anyone who has consistently helped mission work unfold in mission lands, though, and you’ll likely hear statements like, “I thought I was the one who was giving, but it was me who received the most!”

Centuries ago, missionaries introduced people in Ethiopia to Jesus. After a decline in missionary activity, a priest arrives. He is escorted by torchlight through dark paths to a hut serving as the chapel. All light is extinguished but for one candle.

The people sing a song learned long ago to Jesus, making the sign of the cross. The priest falls to his knees and thinks, “How hungry are the people for the Father, Son and Holy Spirit!”

Elsewhere in Ethiopia, children walk four miles each way to a school run by missionaries. There each morning the children — hungry from their walk — are given two biscuits: one to eat at school, the other to take home.

A girl offers the priest a piece of her biscuit, saying she wants to share in the name of Jesus. She is confident that Jesus will take care of her hunger and that of her family.

Missionaries — and those who support them — are helping to make spiritual and corporal works of mercy happen, including catechesis, evangelization and nurturing of vocations.

A Vietnamese seminarian spends 11 years preparing to be ordained, the first of his ethnic group to become a priest. Like a modern-day St. John Vianney, this young man works against strong odds, helped by those who support missions throughout the world.

In gratitude for missionaries, he maintains a singular focus on serving the church. The body of Christ is served. Those who gave so that a young man in a mission land could hear confessions, anoint the sick and confect the Eucharist are themselves recipients of great blessings throughout this mystical body.

In Uganda and Nigeria: The served give back, ‘hugging the whole world’ in prayer

On the feast of the Body and Blood of Christ, women approach the convent with baskets on their heads — offerings of eggs, fruits and vegetables to express gratitude to the missionaries and those who help make their service feasible. Whenever a missionary returns to the United States, the words of farewell are: “Goodbye. May God and Our Lady keep you safe.”

A young girl’s baptismal name means light. She attends a school staffed by missionaries. Shortly before her first holy Communion she locks herself in a room for a short while, to pray intensely that she will do good works in return for Jesus coming to her.

She sees God as the great missionary to the world and calls her prayer an act of mission service. She centers her life on prayer in a desire to help the whole world.

When she prays the mission rosary (multicolored beads representing Asia, Africa, the Americas, Oceania and Europe) she says, “I am hugging the whole world — especially America, home of our missionaries and those who support them.”

An orphan boy becomes a priest; his sister enters consecrated life. Given a choice, he becomes a missionary, serving in the U.S. “I am ready to pour out my blood in appreciation for the missionaries who served me.” Each day he offers his private Mass intention, along with personal prayers, for every American.

Her father was beheaded. Her sisters taken as sex slaves. Her house was burned — in part because it is marked by a cross. She exclaims to a missionary, “They can never take my faith!”

A tent is set up to serve as a chapel, including a cross as a sign of hope. An American cardinal visits and she kisses his pectoral cross as a gesture of reverence and expression of the hope instilled in her by missionaries, supported in part by those who participate in World Mission Sunday.

The cardinal’s reaction to this loving act of faith and hope? “I was catechized!” he said.

Choosing Sunday for World Mission Day is no accident. On this day we gather around the altar as a worldwide community to be fed by Jesus, to be blessed by our one Lord and built up for service to his people throughout the world.

Missionaries bring faith to places where a deep hunger for God is felt; they give hope by pointing out the cross of Jesus — and all its blessings. And missionaries show love to those who are ready to express gratitude by giving of themselves in return, all with Jesus at the center, always.

On this World Mission Sunday, please ask God to show you how he wants you to join in his ever-present missionary work. When you respond with loving generosity, you might be surprised at how your outreach fills you up with blessings.

(Ken Ogorek is available for retreats on a variety of topics based on his 20-plus years of diocesan evangelization and catechetical work. Information on his parish missions, days of reflection and related ministries can be found at www.kenogorek.com.)