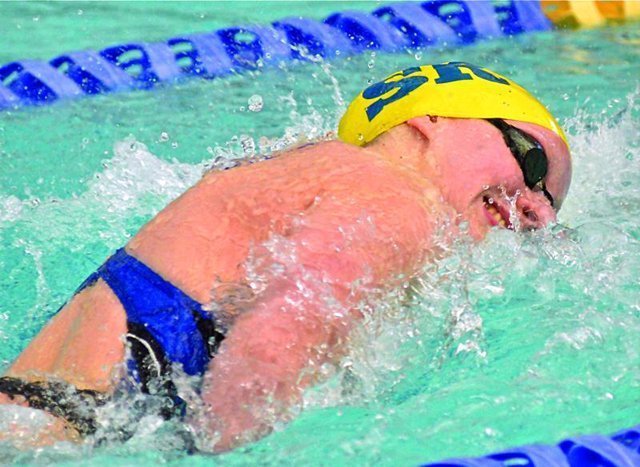 CNS photo/Michael Hoyt, Catholic Standard Swimmer Katie Ledecky, shown in a January 2015 home meet at Stone Ridge School of the Sacred Heart in Bethesda, Md., will be among Washington-area Catholics competing in this summer's Olympic Games in Rio de Janeiro.
By Kelly Seegers
Catholic News Service
WASHINGTON (CNS) — Four years ago, at age 15, swimmer Katie Ledecky won Olympic gold in the women’s 800-meter freestyle.
Since then Ledecky, who attended Catholic schools in Bethesda, Maryland, has become the world record holder in the 400-, 800- and 1500-meter freestyles, and the American record holder in the 500-, 1000- and 1650-yard freestyles. In the Olympics in Rio de Janeiro, she will compete in the 200-, 400-, and 800-meter freestyle.
Yet before every race, she’ll offer a prayer, she told the Catholic Standard, newspaper of the Archdiocese of Washington.
"I do say a prayer — or two — before any race. The Hail Mary is a beautiful prayer and I find that it calms me," she told the Catholic Standard in an email interview.
In the interview, Ledecky discussed how her faith is a source of strength and how the communities at home have supported her along the road to her second Olympics. She attended Little Flower School through eighth grade and Stone Ridge School of the Sacred Heart for high school.
"I received an excellent, faith-filled education at both schools. Having the opportunity to attend academically rigorous schools has facilitated my interest in the world and in serving others and has enriched my life so that it is not solely focused on my swimming and athletics," Ledecky said in the email. "Nevertheless, going to these schools was important to my swimming — my Catholic schools challenged me, they broadened my perspective and they allowed me to use my mind in ways that take me beyond just thinking about swim practices, swim meets and sports."
She also spoke of the support and caring she received from students, teachers, administrators and coaches, some of who traveled to Omaha, Nebraska, to cheer for her during the Olympic trials.
"I feel that I have very special people in my life and, because of that, I feel very fortunate," she said.
"The importance of balance in one’s life is a lesson I have learned, and one that I hope will help me in college and beyond," said Ledecky, who will attend Stanford University in the fall.
"My Catholic faith is very important to me. It always has been and it always will be. It is part of who I am and I feel comfortable practicing my faith. It helps me put things in perspective," she said.
Since the previous Olympics, Ledecky has traveled internationally, including to world championships in Spain and Russia and the Pan Pacific Championships in Australia.
"It has been fascinating to see other cultures, and to see how sports can serve to link these cultures together, even if just momentarily. An interesting common thread I see is the importance of sports in these cultures, the passion that exists for sports and athletic accomplishment," she said. "It is wonderful that sports can have this kind of impact on people, and one can only hope that sports and competition will therefore have a positive impact on how various nations view each other."
She also said people need to look beyond athletics for inspiration.
"I have gained a great appreciation as to what a remarkable privilege it is to represent the United States in the Olympics. I appreciate the flag being on my cap as I compete. That is a real honor," she said.
– – –
Seegers is a staff writer for the Catholic Standard, newspaper of the Archdiocese of Washington.
Copyright © 2022 Catholic News Service, Inc. All rights reserved. Linking is encouraged, but republishing or redistributing, including by framing or similar means, without the publisher's prior written permission is prohibited.