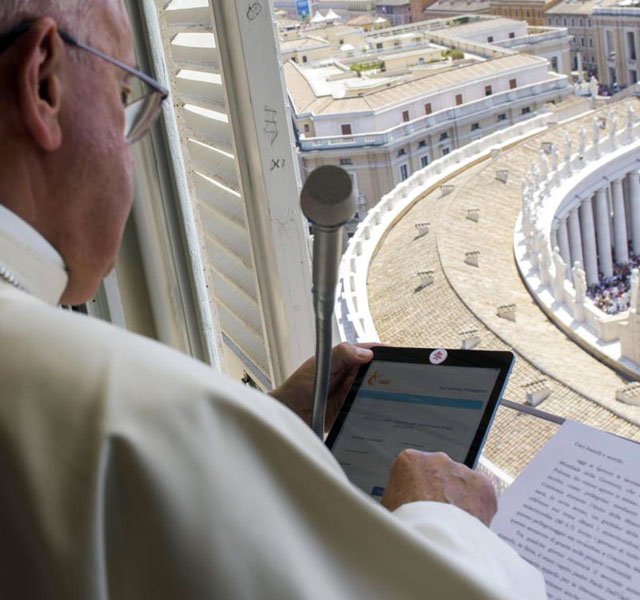 Pope Francis uses a tablet to officially open online registration for World Youth Day 2016 in Poland. He did this during the Angelus from the window of his studio overlooking St. Peter's Square at the Vatican July 26.

VATICAN CITY (CNS) — Pope Francis was the first pilgrim to sign up for World Youth Day to be held in Krakow, Poland, launching the opening of registration.

Accompanied by two Polish teenagers who wore World Youth Day 2016 T-shirts, the pope had to make a couple of attempts pressing the screen of a tablet before his online registration went through.

"There. With this electronic device I have signed up for the day as a pilgrim," he told thousands of people gathered in St. Peter’s Square July 26 for his Angelus address.

The pope said, "I wanted to be the one to open registration" in front of everyone gathered for the Angelus and in the company of two teens on the day sign-ups began July 26.

The celebrations July 26-31, 2016, will come during the Holy Year of Mercy, which Pope Francis proclaimed to invite people to follow the merciful example of God, the Father.

World Youth Day "will be, in a certain sense, a jubilee of youth" during the holy year, as its theme is also about being merciful toward others, the pope said.

God’s merciful power through Jesus "heals every ill of body and spirit," the pope said before praying the Angelus.

Reflecting on the day’s Gospel reading, St. John’s account of the multiplication of loaves and fish, Pope Francis said the story shows how the disciples tried to find a "market"-based solution by calculating how much money they would need to feed the large, hungry crowd that had gathered by the Sea of Galilee.

"But Jesus substitutes the logic of buying with another logic, the logic of giving" when he points to the generous gift offered by the boy, Andrew, who offered to give all that he had: five small loaves and two fish.

Even though people could not see how such a small contribution could make a difference, "God is able to multiply our tiny gestures of solidarity and let us participate in his gift," the pope said.

Jesus offers "fullness of life for those who hunger. He satisfies not only material hunger, but also that deeper hunger — the hunger for meaning in life, the hunger for God," Pope Francis said.

Complaining does nothing to solve the many problems in life, "but we can offer that little we have like the boy in the Gospel," he said.

Everyone has some kind of talent or skill as well as time, he said. "If we are willing to put them in the Lord’s hands they will be enough so that there will be a little bit more love, peace, justice and above all joy in the world."

Editors: A related video can be viewed at https://youtu.be/wcXsEbrWID0

Copyright © 2015 Catholic News Service/U.S. Conference of Catholic Bishops. www.catholicnews.com. All rights reserved. Republishing or redistributing of CNS content, including by framing or similar means without prior permission, is prohibited. You may link to stories on our public site. This copy is for your personal, non-commercial use only. To request permission for republishing or redistributing of CNS content, please contact permissions at cns@catholicnews.com.