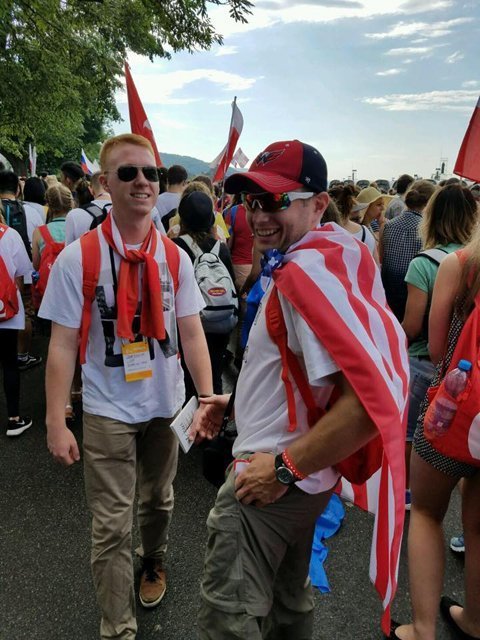 ROCHESTER — All four World Youth Days that Father Brian Cool has attended have been packed with enthusiasm, with scores of young-adult Catholics uniting to celebrate their faith with their pope.

An extra layer of emotional impact — a deeply sobering one — was a part of Father Cool’s most recent World Youth Day journey.

One day after Pope Francis’ July 31 closing Mass in Krakow, Poland, Father Cool journeyed 40 miles west of the city to tour the Auschwitz concentration camp. There, he and Kevin Bonko — a member of the University of Rochester’s Newman Community where Father Cool serves as director — encountered a much more subdued atmosphere than they’d experienced over the previous few days.

"Going to World Youth Day is one thing, and going to Auschwitz is just totally eye-opening — painful, reflective. We had to process that," Father Cool said about viewing the largest World War II concentration/death camp operated by the Nazis.

For the most part, however, the journey to Poland was exhilarating, he said. Father Cool and Bonko were abroad from July 25-Aug. 8 — one week for World Youth Day and another for visiting other nearby Eastern European destinations. In Krakow they met up with another current UR student, sophomore John Rossiter, and stayed at the home of Karol Wilczynski, who formerly attended the university.

At World Youth Day they attended a number of catechetical events, Masses and cultural activities. Highlights included Friday-evening Stations of the Cross; a candlelight service the following night; and the closing Sunday Mass with Pope Francis, prior to which Father Cool and Bonko slept outside overnight. Once during the week, they got within very close range of the pope — an occurrence that serves as a fond memory for Bonko.

"You see him on the news, this is the guy that wrote the encyclicals — and he’s 20 feet away," remarked Bonko, 21, a senior mechanical-engineering major from Cleveland who was attending his first World Youth Day.

Bonko was equally impressed by the huge crowds of young adults, including a gathering of what he and Father Cool estimated as 2 million people for the final Mass.

"Just to see the enthusiasm, especially at this point in history with all the tension among nations — that’s what I took away, not the youth setting but the universal church setting," Bonko said.

That kind of fervor has led Father Cool to be on hand for World Youth Day multiple times since he began at UR in 1999 (he also has directed the Catholic campus ministry at Rochester Institute of Technology since 2014). Father Cool’s previous World Youth Day journeys were in Rome in 2000, Toronto in 2002 and Cologne, Germany, in 2005. All those trips have involved contingents from UR; Father Cool also accompanied students from there to Philadelphia last September for a papal Mass with Pope Francis.

"For me, there are two places I’ve experienced in my lifetime where one really gets a sense of the universality of the church. One is at Marian shrines, and the other is World Youth Day," Father Cool stated, adding that "it provides youth the opportunity to recognize they are a part of something much larger than themselves." He also said he was pleased with many first-time efforts this year in the Diocese of Rochester to stage local activities in conjunction with World Youth Day.

The recent pilgrimage by Father Cool and Bonko included stops in Prague, Czechoslovakia; Vienna, Austria; and Budapest, Hungary. However, Poland accounted for the greatest portion of their sightseeing, beginning with Auschwitz, which carried great meaning for Bonko, a self-described history buff.

"I saw Normandy last year and (visiting) it was the top place on my bucket list. Number two was Auschwitz," he said.

In addition to Auschwitz, he and Father Cool visited many Polish churches — some of which were built in the Middle Ages and are still thriving today — as well as the convent and shrine of St. Faustina Kowalska, originator of the Divine Mercy devotion.

Particularly meaningful to Father Cool were visits to the St. John Paul II Sanctuary, a shrine in Krakow; as well as Wadowice, the late pope’s hometown.

"That was very personal to me," Father Cool said. He explained that his confirmation name is John Paul, and that the first Polish pontiff in history — who led the Catholic Church from 1978 until his death in 2005 — has had a major impact on his priesthood.

St. John Paul — whom Father Cool and Bonko noted is still highly revered in his home country — also was the originator of World Youth Day, which was first held in Rome in 1986. The event takes place every three years, with the next one scheduled for 2019 in Panama.