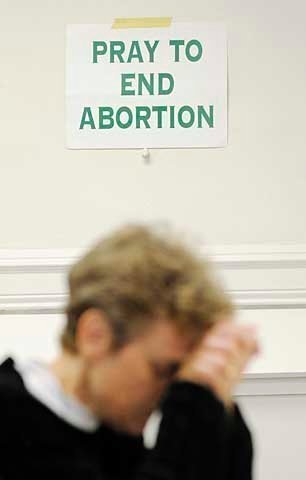 Sue Herbert prays at Rochester's Our Lady of the Americas Church during a 2008 prayer service that marked the start of the local 40 Days for Life campaign.

Parishioners in the Diocese of Rochester will join Catholics from around the world in a prayer vigil for unborn babies on Nov. 27.

Pope Benedict XVI announced earlier this year that he will lead a prayer vigil for nascent human life as he presides at the first vespers for the first Sunday of Advent, which is Nov. 29.

Several local parishes are hosting prayer vigils and other events as a way to participate in the event. Parishioners also are invited to take part in personal prayers on behalf of the unborn if they are unable to attend a vigil.

"The period in which we prepare for Christmas is an appropriate time to invoke divine protection on every human being called into existence, and to thank God for the gift of life we received from our parents," Pope Benedict XVI said Nov. 14.

"Right now, members of our human family are very much at risk of being put to death, either through research advances in embryonic stem cell research, or through abortion or even there is a chorus beating for infanticide to be a legal practice," said Armantrout, who explained that some ethicists have called for infanticide of some disabled newborns.

He noted that the U.S. Catholic Church annually observes a day of prayer and penance for unborn children — Jan. 22 — coinciding with the U.S. Supreme Court’s 1973 Roe v. Wade decision, but he noted that until this year, the worldwide church lacked a similar day of prayer.

Since the Catholic Church is global in scope, it is in a unique position to raise awareness of threats to life throughout the world, Armantrout said.

"(The eve of Advent) is a wonderful day to remember that with new life comes the challenges of protection, but there’s also the joy of new life," she said.

Although the vigil will take place during a weekend when those in the U.S. celebrate Thanksgiving, the Thanksgiving holiday also is an apt time for Americans to pause and give thanks for their children as well as those who loved and cared for them when they themselves were unborn, she noted.

As of Nov. 22, the Diocese of Rochester has been informed of the following vigil events: