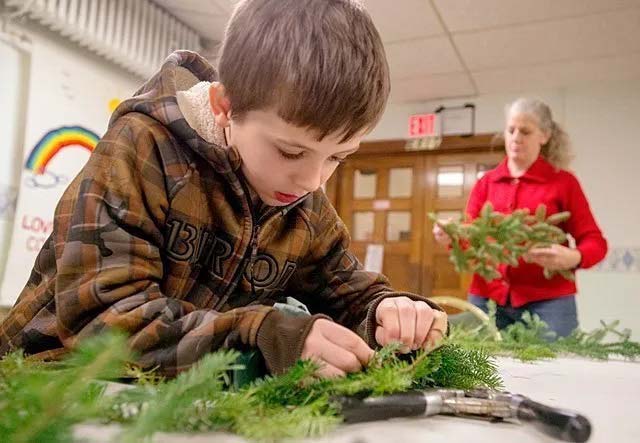 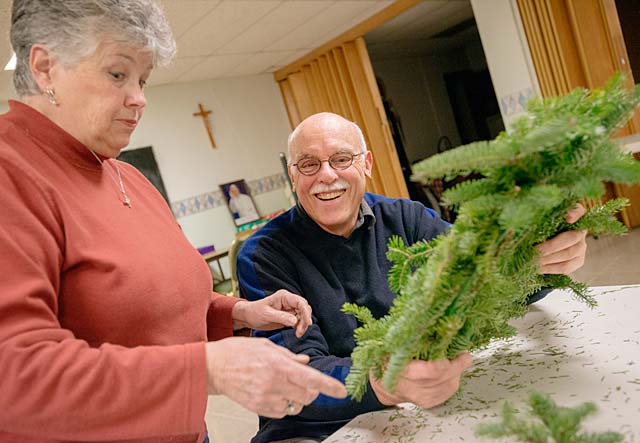 Most Catholic families probably have an Advent wreath, a creche or perhaps both somewhere in their homes. The Advent wreath and the creche — sometimes called a Nativity scene or manger scene — are two of the most recognizable Advent liturgical symbols.

Each of the Catholic Church’s liturgical seasons has symbols attached to it, and these images can be very powerful, according to Father George Heyman, president of St. Bernard’s School of Theology and Ministry in Pittsford.

“Symbols are avenues into the sacred for us. We use symbols as a way to understand the mysteries, (such as) the mystery of the Incarnation, of God becoming one of us. How do you get your mind around that?” he asked rhetorically. “We use a symbol.”

The oldest symbol of Advent is the Jesse tree, which depicts Jesus’ lineage in the form of a family tree with Jesse, the father of King David, at its base, Father Heyman said. The Scriptural source for these trees, which usually include pictures or symbols to represent Jesus’ ancestors, may be found in Isaiah 11:1: “But a shoot shall sprout from the stump of Jesse, and from his roots a bud shall blossom.”

The creche and Advent wreath are not quite as old as the Jesse tree, but each of those symbols has been around for at least a few hundred years, Father Heyman added. St. Francis of Assisi started the creche tradition in 1223 when he received permission from the pope to set up a manger scene using live animals in Greccio, Italy, noted Jamie Fazio, campus minister at Nazareth College in Pittsford.

“It was meant to be a model for the people to come and reflect on the way God chose to come into the world, among those society had considered to be outcasts,” Fazio said.

We know Jesus was born in a humble environment because of the words St. Luke used in his account of the Nativity, Father Heyman said. Luke’s Gospel tells us that Mary laid the baby Jesus in a “manger,” which at that time was the word for a rough trough or window between the two rooms in the homes of poor Israelites, he said. One of these rooms housed a family, while the second room usually housed animals; food for the animals usually was placed in the manger between the two rooms, he added.

Luke used the word “just to highlight the fact that he was born among the poorest of the poor,” Father Heyman said.

St. Francis didn’t have access to an Israelite’s house, but he did have access to live animals as well as a trough used to feed them, so that’s what he used in his live Nativity scene, Father Heyman remarked. St. Francis used this living creche to teach people about the mystery of Christ’s birth, and eventually people brought the tradition of the creche into their own homes. But rather than real people and animals, these in-house Nativity scenes used statues, added Father Robert Kennedy, pastor at Rochester’s Blessed Sacrament, St. Boniface and St. Mary parishes. The Catholic Church’s Book of Blessings includes a special blessing for creches, which help bring the Christmas story to life, he noted.

Nativity scenes help people relate the story of Jesus’ birth to their own lives and can even challenge people, according to Fazio, who noted that Jesus was born into a refugee family and that Pope Francis recently called upon Catholics throughout the world to show compassion for refugees. Catholics also are called to be examples of the living light of Christ in the world, he said. Since the lit candles of an Advent wreath represent that calling, such wreaths can be symbols of challenge for Catholics, Fazio said.

Father Heyman said Advent wreaths originally were used by German Lutherans, and their circular shape and evergreen boughs are symbols of God’s never-ending love. The wreath’s four candles represent the four weeks of Advent, and the wreath gives off more light each week as a new candle is lit.

“The light gets stronger as we grow nearer to the birth of Christ, who was the light of the world,” Father Kennedy said.

While the candles represent Catholics’ challenge to be the light of Christ in the world, they also remind Catholics that a community of light is burning brightly around them in the dark days before Christmas, Fazio said. Both the Advent wreath and the creche are symbols of hope in difficult times, and everyone can relate to that, he added.

“We all come into Advent with the worries of our lives, the stresses of our lives,” Fazio said. “These symbols of Advent confirm us, give us hope and also motivate us to reflect on how we’re being invited and called and challenged.”