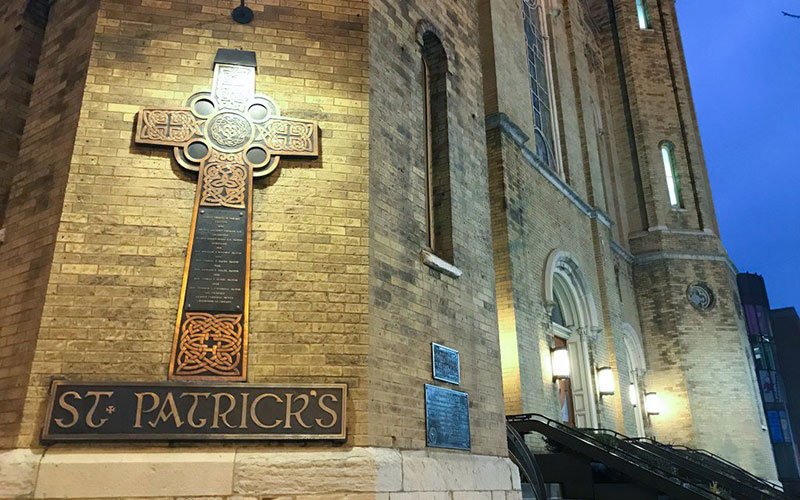 It became the latest of similar pilgrimages I’ve made over the years to more than two dozen churches and other spots associated with Ireland’s patron saint. I do it to honor and explore my Irish and Catholic heritage, though St. Patrick is recognized across Christian denominations.

In Ireland, Catholic and Christian churches are named for the saint. In the Republic of Ireland, I’ve toured the 800-year-old Church of Ireland cathedral in Dublin, site of where the saint himself performed baptisms; walked the halls of the namesake pontifical university at Maynooth; and stood among medieval ruins of St. Patrick’s at Wexford. I’ve clambered up the rocky 2,500-foot height of Crough Patrick in County Mayo, topped by a chapel dedicated to the saint.

In Northern Ireland, where historic animosity still simmers between Catholics and Protestants, I’ve attended Mass at St. Patrick churches in Derry and Belfast. In Downpatrick, I learned about the saint’s life at the Saint Patrick Centre museum, stood at his nearby gravesite outside the Church of Ireland’s Down Cathedral, and prayed at the town’s Catholic St. Patrick Church.

The Fredericksburg church is not the largest or most ornate of these worship spaces. But I was heartened the legacy of the fifth-century saint has carried into a 21st century church. And since the parish’s 1980s building was still open, my trip was a twofer.

As Christians, we are blessed to have many saints who point us to the Lord through the examples of their lives. St. Patrick was a slave and a shepherd before he became a bishop and leader of a nation’s conversion to Christ. His story reminds us that we don’t know how our lives will unfold, and, more importantly, how we might be used in the Lord’s service.

At St. Patrick churches, I am reminded of the Trinity, symbolized by the three-leafed shamrock held high by the saint, artistically rendered in stained glass, mosaic and marble. It’s an opportunity to pray the beautiful St. Patrick’s Breastplate.

St. Patrick is no better than other holy men and women, but he is more popular. As a result, his feast day has become overly secularized, too much about green beer or green rivers.

St. Patrick’s popularity in America was driven by waves of Irish immigrants, including my maternal grandparents and other relations. They were not always welcomed, as too often is the case with today’s immigrants. Stories of Irish faith and family are often told through the histories of St. Patrick churches.

A century ago, American support for Irish independence from Britain was energized from the landmark, twin-spired cathedral in New York City. Archbishop (later Cardinal) Patrick Joseph Hayes, son of Irish immigrants, in 1920 welcomed rebel leader Éamon de Valera to the St. Patrick’s Day Mass, then sat next to him at the big annual parade.

Pope Leo XIII issued an encyclical against the violence of Irish tenant farmers in 1888 as the cornerstone was laid for St. Patrick’s in Rome. This caused what one historian described as “perhaps the worst period in the whole history of Irish relations with the Holy See.”

My wife and I visited this church, plain by Roman standards, on an Easter Saturday morning. A statue of St. Patrick guarded the sanctuary, the tabernacle empty and altar stripped before the Easter Vigil.

My first, favorite and most frequented St. Patrick’s is in Pittsburgh, my hometown. I haven’t lived there in decades, and this church wasn’t my home parish. But it has become a sentimental touchstone.

Dedicated on St. Patrick’s Day in 1936, a piece of the Blarney Stone from Ireland is placed in the round tower that shelters the baptistery. The church also features a replica of the Scala Santa, or the Holy Stairs, which by church tradition are the 28 marble steps that Jesus ascended to Pontius Pilate’s praetorium.

The St. Patrick’s I most hope to visit is the 1815 Basilica of St. Patrick’s Old Cathedral in lower Manhattan, not the familiar 1879 cathedral on Fifth Avenue in midtown. Hurried business schedules have nixed my chance to see New York’s original namesake church.

On the other hand, a weather-diverted flight once stranded my wife and me in Charlotte, North Carolina, for a weekend. You can guess where we unexpectedly attended Mass.

I check for a St. Patrick church no matter where I travel. It’s an ongoing, open-ended pilgrimage. I’ll see other so-named churches, or not, according to the Lord’s will … and the luck of the Irish.

Editor’s Note: To see Holan’s list of St. Patrick churches, go to markholan.org, where he writes about Irish history and contemporary issues.

Holan is a contributor to the Arlington Catholic Herald, newspaper of the Diocese of Arlington.