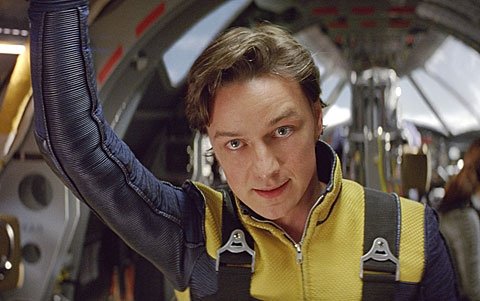 That’s the implied message of "X-Men: First Class" (Fox). In this briskly paced Camelot-era prequel to the franchise of comic-book adaptations, an assortment of young mutants teams up to take on the Soviet Union — as well as some evil adversaries of their own kind — during the Cuban missile crisis of 1962.

Although on the side of truth and justice, these warriors — they’re slightly more evolved than the rest of humanity and each boasts a singular amazing ability — are prone to coarse talk. Additionally, the "Mad Men"-era setting is used as an excuse for skimpy costuming on buxom women. So, despite its source material, this is not an appropriate offering for youngsters.

But, begorrah, one among them is an Irish Catholic. We know this because, at one point, Sean Cassidy (Caleb Landry Jones) who, under the mutant moniker Banshee, flies about shattering glass via sonic waves from his high-pitched screams, takes time to bless himself.

Perhaps he honed his aviation skills under the tutelage of Sister Bertrille of "Flying Nun" fame?

The character of Erik Lehnsherr (Michael Fassbender), who becomes Magneto — in which guise he can bend or move anything metal — is more troubling. He’s a Holocaust survivor, tortured in Auschwitz by evil doctor Sebastian Shaw (Kevin Bacon), who is himself a mutant. Understandably, Erik has anger issues and is out to avenge his mother’s death at Shaw’s hands.

But why, at a climactic moment, does Erik employ the phrase "Never again"? That expression has sacred status among Holocaust survivors and all others who honor the dead of Hitler’s concentration camps. Used in a fantasy action film, it sounds trivialized.

The script, co-written by director Matthew Vaughn with Ashley Miller, Zack Stentz and Jane Goldman, has telepathic Charles Xavier (James McAvoy) — aka Professor X — reassuringly conveying a theme about learning to love one’s true self, even if you are blue and scaly like Raven (Jennifer Lawrence) or blue and furry like Beast (Nicholas Hoult).

The actual history portrayed is not to be taken seriously, but the filmmakers obviously did some research before tricking up the saga. Why did the United States place nuclear missiles in Turkey before the Russians sent similar weapons to Cuba? Why, malevolent mutants were to blame. Now it can be told!

The film contains considerable, though nongraphic, gun violence, a couple of uses of profanity, a few instances of rough language, fleeting sexual references and some mild sexual banter. The Catholic News Service classification is A-III — adults. The Motion Picture Association of America rating is PG-13 — parents strongly cautioned. Some material may be inappropriate for children under 13.