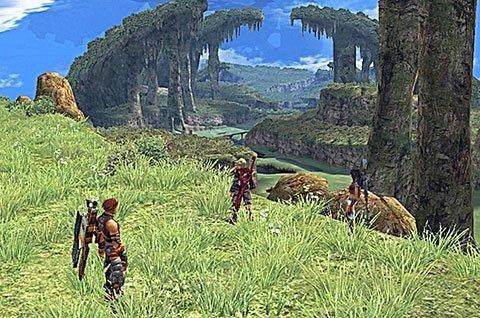 NEW YORK (CNS) — Role-playing games have grown tremendously in the past 20 years. A genre that began with a few men rolling dice to determine damage has burgeoned, and now features huge, epic stories like that of "Skyrim" and "Final Fantasy."

"Xenoblade Chronicles" (Nintendo) represents an attempt to create yet another such game. It offers intense side-quests, imaginative maps and new worlds. But its plot, which initially drives the whole experience forward, eventually takes an unexpected, disturbing — and ultimately unacceptable — thematic turn.

Players follow the adventures of youthful warrior Shulk as he begins to understand the violent conflict that has torn his home world apart since before he was born. Shulk lives on a sleeping titan known as the Bionis, who once waged war against another giant deity called the Mechonis. Shulk’s cosmos is constantly under attack from the Mechon, mechanical beings that have come from the Mechonis to destroy all life on his adversary.

The plot thickens substantially after Shulk swears revenge on the Mechon for having killed one of his closest friends, Fiora. During the struggle, Shulk begins to wield the mysterious Monado, a blade that has the ability to cut through Mechon like warm butter and that also enables Shulk to see the future.

These elements of storytelling weave into the intense game play. Shulk has visions in the heat of battle that allow the gamer to see major assaults before they happen, and adjust his strategy accordingly. The player can warn his comrades and ask them to activate particular abilities that will empower them to withstand the devastating onslaught before it happens.

Along these lines, gamers can prepare for battle by equipping their party with armor appropriate for the situation. Surprise, surprise: Female battle armor consistently comes designed to reveal a large amount of cleavage. Not only does this violate common sense; it offends the dignity of women.

While armor can be selectively chosen, oddly enough, sometimes the best armor is also the most revealing, leaving the character substantially stronger, yet immodestly exposed.

We are warned not to judge a book by its cover. But these days, it seems, you can’t even judge a video game by its first 25 hours of play. In the case of "Xenoblade Chronicles," the game’s tone and overall message change dramatically when Shulk and his friends discover that Zanza, the "god" of Bionis, is really the story’s central antagonist.

It could be said that this god is just another example of polytheistic legend to be placed on the same shelf as those of Greek mythology. The game’s writers make it apparent, however, that this being is meant to be an avatar of Christianity.

Thus Zanza’s main henchmen are called "the Trinity," and each one, individually, is considered a "disciple." Furthermore, Zanza claims the ability to grant people "eternal life." These words and phrases, used in tandem with more general references to "divinity," evoke ideas found primarily within Christian theology, making it inescapably evident that Christianity is the force against which our hero is contending.

Worse still, the game’s quests, challenges and entire outlook focus on "creating a world without gods." That’s a blasphemous ambition to the fulfillment of which, even in a fictional setting, no gamer of faith will want to contribute.

The game contains atheistic themes and a negative portrayal of the Christian faith, bloody violence, brief partial nudity and some uses of profanity. The Catholic News Service classification is O — morally offensive. The Entertainment Software Rating Board rating is T — Teen.