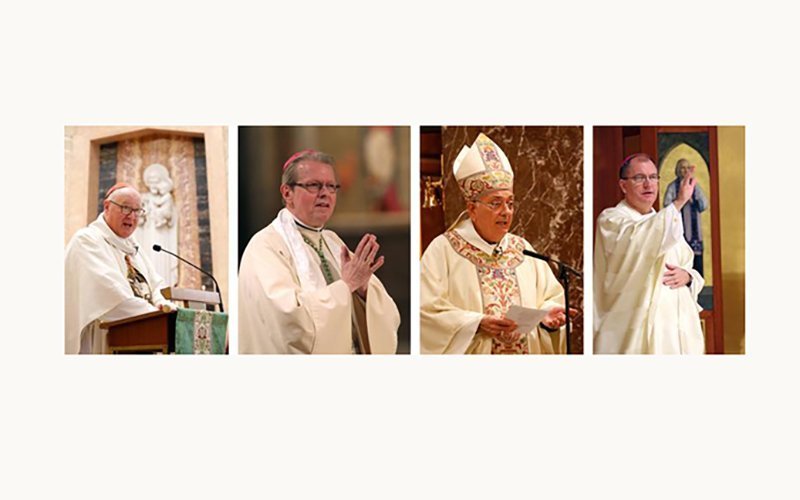 New York Cardinal Timothy M. Dolan and Bishops Edward B. Scharfenberger of Albany, Nicholas DiMarzio of Brooklyn and John O. Barres of Rockville, center, are pictured in a combination photo. (CNS photo by Gregory A. Shemitz and Bob Roller)

ALBANY, N.Y. (CNS) — New York state’s yearlong “window” in the statute of limitations opened Aug. 14, allowing suits to be filed by victims alleging abuse by priests, church workers and employees of public schools, hospitals and other institutions no matter how long ago the alleged abuse occurred.

New York Cardinal Timothy M. Dolan in a video message on Twitter noted that the day was also the feast of St. Maximilian Kolbe, who gave his life at the Nazis’ Auschwitz death camp in Poland to spare the life of a young father.

The saint, the cardinal said, is revered for his bravery but also for something else: “He kept his faith and hope and love in a very dark time.”

“Today I don’t mind admitting to you is a dark time in the life of the church,” Cardinal Dolan said. “You’ve probably been hearing that this is the first day of the opening of the statute of limitations, so we’re going to hear a lot today about people bringing suit against the Catholic Church and other organizations, public schools, government organizations, Boy Scouts and hospitals … you name it … for past sexual abuse.”

Gov. Andrew Cuomo signed the Child Victims Act into law Feb. 14, opening this window in the state’s statute of limitations and making it easier for abuse victim-survivors to sue over the next year. The state’s Catholic bishops supported the final measure because it was drafted to include both private and public institutions. Earlier versions only targeted the Catholic Church.

“The fiscal impact on the Catholic Church and other organizations won’t become clear for weeks or months,” said Dennis Poust, director of communications for the New York State Catholic Conference, the bishops’ public policy arm. “Today is a day for survivors to tell their stories and to take an important step on their long journey toward healing.”

“The bishops want to accompany survivors on this journey, to thank them for bravely coming forward, and to again apologize unconditionally for what they endured at the hands of those who so grievously abused their trust,” he said in a statement.

“It is a tough time, it’s a dark time,” Cardinal Dolan said in his video message. “It’s especially difficult for our beloved victims and their families to see all this drug up again, to have these wounds reopened. It’s a tough time for our victims, survivors and families and I’d ask you to pray for them.”

He also asked for their prayers for others in the archdiocese: “for the overwhelming majority of our great priests who’ve been extraordinarily faithful, virtuous and hardworking in the midst of all this. They suffer.”

The priests are good people who also “hate to see this wound reopened, but they keep telling me, ‘Cardinal, we need to reach out with justice and love to the victims, (need) to have reform and renewal and in the church and let’s get on with it.'”

Like St. Maximilian Kolbe, “we do our best to keep our faith, hope and love in the midst of tough times,” Cardinal Dolan concluded.

Catholic bishops around the state issued statements about the new “window” opening Aug. 14, including Bishop Edward B. Scharfenberger of Albany.

“All of us in the Diocese of Albany — and in the church worldwide — will face challenges in the months ahead and may even become dispirited as revelations of sexual abuse come forward in light of the Child Victims Act,” he said.

“Although we cannot know the extent of what is before us, we do know that we will be a different church when this process is over, but we will be a better church because of it,” Bishop Scharfenberger said. “The truth is the only way through this, and the truth will set us free.”

He added, “We admire the bravery of those who have come forward to share their stories of betrayal and pain to help other survivors of childhood sexual abuse.”

In Syracuse, Bishop Douglas J. Lucia, who has headed the diocese for just over a week — he was ordained and installed Aug. 8 — issued his first letter in that new role to address the Child Victims Act.

Under the new law, the church and other public and private institutions will “collectively … experience afresh the pain of sacred trust violated and of the victims and their families whose spirits and lives have been so demoralized and harmed,” he said in an Aug. 10 letter issued ahead of the law taking effect.

He apologized in the name of the diocese “for the heinous acts perpetrated against them (victims) by their abusers who were supposed to be the caregiver of souls. Bishop Lucia renews his offer to meet with victims, “if there is any way I can assist them in their search for healing and peace.”

In the days and weeks ahead, if parishes and other diocesan institutions are contacted regarding a civil lawsuit, “we will turn all such matters over to legal counsel to ensure they are handled properly and fairly,” he said, adding he is committed to be as forthcoming as possible while respecting confidentiality that comes with due process.

He urged Catholics to not forget the strides the Syracuse Diocese has made in acknowledging its failures, addressing abuse “and seeking to ensure that our children are safe” through its child protection protocols, providing victims assistance outreach and the work of an independent compensation program for victims/survivors.

“I know this might not be what one might think a first letter of a new bishop to his new family should be, but I have always considered myself a realist,” Bishop Lucia wrote. “This is where we are at on our journey as church and so I ask myself and you, brothers and sisters, how can we make the light of Christ more real and let it case out the darkness? For me, that is the mission ahead and so I rely on your prayers and assure you of mine.”

Bishop Nicholas DiMarzio of Brooklyn said: “Today, we stand with victims who were sexually abused as children. We have reached this point because too many victims all across society have sadly carried this heavy cross for far too long. Sexual abuse is a heinous crime, and victim-survivors now have a new avenue to seek redress through the Child Victims Act.”

“For anyone abused by a priest, employee or volunteer — I am sorry that a member of our church who you trusted became the source of pain and anguish,” he said in an Aug. 14 statement, which was posted on the diocese’s website with various links to its response to the abuse crisis and resources.

“You should know the Diocese of Brooklyn has instituted the most aggressive policies to prevent any future abuse and to protect children.”