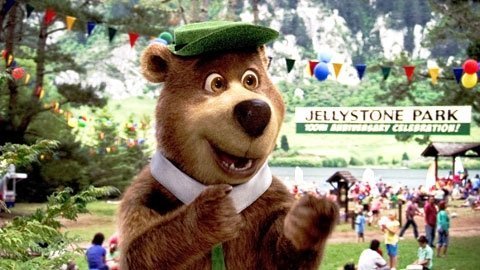 Yogi (voice of Dan Aykroyd) and his faithful sidekick, Boo Boo (voice of Justin Timberlake), live happily in Jellystone Park, where they spend every waking moment in search of their next meal. Yogi specializes in stealing the "pic-a-nic" baskets of campers, despite the protestations and warnings of his diminutive friend.

Aykroyd gives Yogi an accent that would fit in nicely on the Jersey Shore, while Timberlake seems to be holding his nose as Boo Boo.

Ranger Smith (Tom Cavanaugh), the nerdy overseer of Jellystone Park, tries vainly to rein in Yogi and keep the peace. Since Yogi’s increasingly inventive methods at theft — including an array of Rube-Goldberg-like contraptions — do not a feature film make, two elaborate subplots are inserted for the human characters.

Enter Rachel (Anna Faris), a documentary filmmaker fascinated by talking bears, who becomes the perky blond love interest for Ranger Smith. Yogi offers courtship advice of a sort to the ranger: "Urinate on her to mark your territory."

Next, wicked Mayor Brown (Andy Daly) wants to close Jellystone Park and sell the logging rights to fund his race for governor. When the bulldozers arrive and the trees start tumbling down, bears must join forces with humans to save the day.

Director Eric Brevig ("Journey to the Center of the Earth") manages to enliven this surprisingly unfunny film with beautiful cinematography. If Jellystone Park looks a lot like Middle Earth, there’s a good reason: "Yogi Bear" was filmed in New Zealand, taking full advantage of the lush and breathtaking scenery featured so prominently in the "Lord of the Rings" trilogy.

"Yogi Bear" contains lessons on friendship and loyalty, as well as protecting the environment. "You have to fight for the things you love, whether a park, a girl or a roast beef sandwich," Yogi tells Ranger Smith.

But the title character’s behavior will strike at least some parents as problematic. Yogi specializes in two things: stealing, and lying about it. He never learns his lesson, nor do kids want him to.

While Boo Boo is Yogi’s conscience, much like Jiminy Cricket is to Pinocchio, Yogi does not seek redemption — only his next meal.