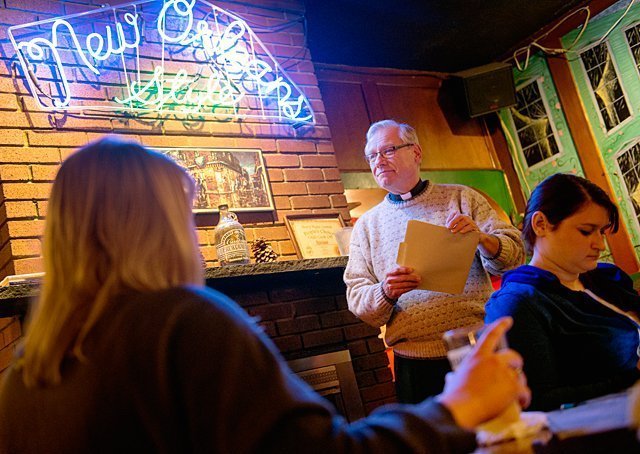 Father Robert Kennedy gives the first presentation in the four-week Lenten Theology on Tap series on Feb. 22 at The Beale New Orleans Grille & Bar in Rochester.

ROCHESTER — Pope Francis and mercy aren’t the usual topics of conversation one would expect at a bar, but the opportunity to discuss them is what drew more than 40 young adults to The Beale New Orleans Grille & Bar Feb. 22.

The evening was the first installment of the four-part Theology on Tap Lenten series, sponsored by the Diocese of Rochester’s Department of Evangelization and Catechesis. The annual discussion series provides the opportunity for young adults to gather and talk about issues of faith in a bar or pub atmosphere. Theology on Tap usually runs over several weeks in the summer, but this year, the Department of Evangelization and Catechesis decided to offer a variety of four-week sessions throughout the year.

"We want to show young adults that we are visible and we are out there," said Noëlle Hiester, director of Evangelization and Catechesis. "We are hoping they will get to know people better if it was held at different times throughout the year instead of it was only one month in the summer."

The Lenten series is the first one of 2016, with the next series being planned for the spring, Hiester explained. She said that mercy is the theme of the four-week Lenten series because of the Jubilee Year of Mercy that Pope Francis commenced on Dec. 8, 2015.

Each week, different presenters from around the diocese will lead the discussion on various topics involving mercy. Father Robert Kennedy, pastor of Blessed Sacrament, St. Boniface and St. Mary parishes in Rochester, began the series Feb. 22 with the presentation "Pope Francis: Formed by Mercy."

Father Kennedy started the discussion by asking those gathered what attracts them to Pope Francis, then he spoke about the things he has observed from the pontiff: his Jesuit background, his concern for the poor, his style as a "shepherd pope."

Father Kennedy also spoke about the significance of the Synod on the Family, as well as Pope Francis’ encyclical on the environment. He concluded his presentation talking about mercy and what mercy really means.

"When we think of mercy, most of us think pity, but that is not what he (Pope Francis) means," Father Kennedy explained. "Because he is such a man of Scripture and prayer, he understands the biblical meaning of mercy, which, when it is used in Scriptures, means compassionate and understanding love that arises right from the depths of who we are."

After the presentation, the young adults asked Father Kennedy questions about Pope Francis as well as various recent issues affecting the church, such as the refugee crisis.

Susan Connors and her husband, A.J., parishioners of St. Mary Church, have attended previous Theology on Tap presentations. Susan said the topic of Father Kennedy’s presentation is what sparked her interest in attending the Lenten series.

"Pope Francis is such an interesting figure for both Catholics and non-Catholics. He makes so many headlines in the news, so I just wanted to hear more perspective on him and his decisions," Susan explained.

The Connors said the location also was convenient for them, as they live just a few blocks away from The Beale New Orleans Grille & Bar. They noted that they have plans to attend some of the remaining installments of the Lenten series.

"Every Lent, I try to find ways to do more things to expand my knowledge of my faith and to be more spiritual, and this seems like a perfect opportunity to do that," Susan remarked.