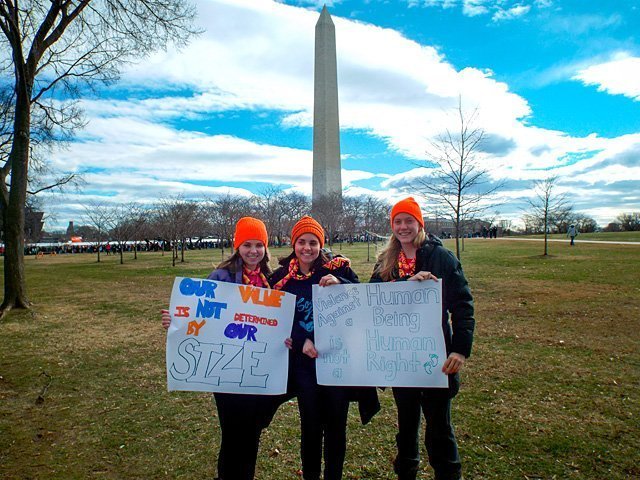 Cornell University students Katie Forkey (from left), Sarah Meidl and Lauren Conger pose for a photo during the March for Life in Washington, D.C., in January.

Come down the hill.

Both literal and figurative meanings are contained in this favorite expression of Jeremiah Deep’s.

The “hill” refers to the campus settings of Cornell University and Ithaca College, located just a couple of miles apart in highly elevated sections of Ithaca. By physically moving off their respective hills to do mission work, Deep explained, students also leave behind the isolation and self-absorption that college life can produce in one’s consciousness.

“There’s a world beyond, where a lot of people are going through tough times, suffering and poverty,” said Deep, who serves as campus minister for service, social justice and outreach at the Catholic communities of both colleges.

Lately, several young adults have taken Deep’s exhortation to heart. From Jan. 15-21, three students from Ithaca College and five from Cornell visited Nazareth Farm in West Virginia to perform volunteer labor for the rural poor. Then, on Jan. 27, three Cornell students took part in the March for Life in Washington, D.C., joining tens of thousands of people from across the United States. 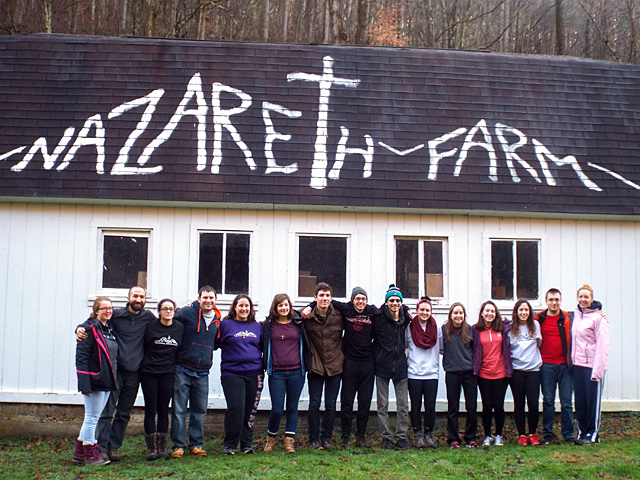 Students from Le Moyne College (from left) Ithaca College and Cornell University pose for a photo at Nazareth Farm in West Virginia.

The first trip involved installing drywall and new flooring at the homes of impoverished people in northern West Virginia. In addition to service, the Nazareth Farm experience focused on prayer, community and learning about Catholic social teaching and the local culture.

John Morton, campus minister for small-group spirituality and communication at Cornell and Ithaca, observed that his group grew both spiritually and socially as the week progressed:

“It was so rewarding to see the students give of themselves in a way that allowed them to find God in the work they did and in the people they met,” he said.

Deep, who made the Nazareth Farm trip as well, noted the simple living conditions, which included no cell phone or computer service all week. Whereas this was an initial struggle for some, he said they discovered by week’s end that “it was kind of nice to get away and focus on community.”

“I was kind of looking forward to (the lack of technology). We were living in the moment,” added Meghan Murray, who was joined at Nazareth Farm by fellow Ithaca College students Erin Broussard and Devin McQuillan as well as Cornell’s Matt Funkhouser, Christian Gomez, Lauren DeLorenzo, Jeff Miles and Matt Pegan.

Morton pointed out that group members all cut short their winter breaks to travel to West Virginia. On the other hand, Murray said she didn’t consider what she did a sacrifice.

“To be really honest with you, it’s more of a privilege, a gift from God. The community that we established was unbelievable, and I really feel like God was intending that for me,” said the junior from Latham, N.Y.

A bit over a week after the Nazareth Farm trip ended, Morton and Cornell students Lauren Conger, Katie Forkey and Sarah Meidl attended the 43rd-annual March for Life. They joined up with a two-bus contingent traveling out of Ithaca that included marchers from several area Catholic parishes. Highlighting the 24-hour trip was a noon rally at the Washington Monument followed by the march up Constitution Avenue to the Capitol and Supreme Court.

Both Morton and Forkey, the March for Life student organizer for Cornell Catholic Community, said they were deeply moved by the sheer volume of people united against legalized abortion — “advocating for those without a voice,” as Morton put it.

Morton added that he was impressed with the passion exuded by the trio of Cornell students regarding their pro-life views. Forkey, a sophomore, said her passion stems from her belief that standing up for life is “the largest social-justice issue of our time.”

“Abortion has now taken the lives of more than 54 million children in the United States, and has disproportionate effects on minorities,” said Forkey, who also went to two Marches for Life while in high school in Princeton, Mass. “Beyond this, as a Catholic, I have a duty to do my best to defend the right to life of all human beings created in the image of God, from conception to natural death.”

Along with Nazareth Farm and the March for Life, further mission opportunities await the Cornell and Ithaca Catholic communities via service retreats during their upcoming spring breaks. Cornell students will visit the Romero Center in Camden, N.J., April 2-7, and Ithaca College students will travel to Rochester for a Sisters of St. Joseph-organized retreat March 12-18. Both trips will involve hands-on service in predominately urban areas.

Whether it’s out of town or right in Ithaca, Deep said he admires young adults who take time out from their studies to become involved in community outreach — and, in doing so, descend those aforementioned hills.

“A lot of students are very selfless and dedicated to their faith, and want to put other people first,” he commented. “They really bring a positive energy to their community.”