Young adults live out their faith while traveling - Catholic Courier 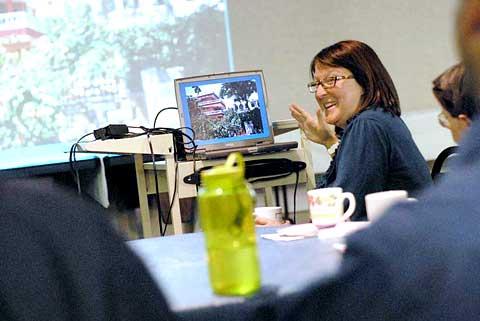 Danielle Lazzaro, a parishioner of Pittford's Church of the Transfiguration, has completed mission work in Zorangé, Haiti, through the organization Hope For Haiti. She shared pictures from her most recent mission trip to the country during an April 29 presentation at St. Mary Church in Rochester.

Mary Lupien said she was deeply affected by the unimaginable loss of life and livelihood following the Southeast Asia tsunamis in December 2004.

"I was driven to do something, anything, to help," Lupien, who currently is on a mission trip in Guatemala, wrote in an e-mail to the Catholic Courier.

Lupien said that’s when she began to plan her first mission trip: a voyage to Sri Lanka in 2005 with Habitat for Humanity’s Global Village program. She said she learned about the organization online and cashed out her 401(k) to fund the trip.

She has been in Guatemala since May working with a group that promotes sustainable agriculture practices, and she also is in the final stages of a Peace Corps application that she hopes will allow her to keep traveling and working on behalf of others. When she’s in the area, Lupien, 28, attends Blessed Sacrament Parish in Rochester and St. Rita Parish in Webster.

Lupien is an example of a young adult who seeks travel opportunities as a way to put his or her faith in action. The 1996 U.S. Conference of Catholic Bishops’ document "Sons and Daughters of the Light: A Pastoral Plan for Ministry with Young Adults recommends service trips to young adults as a way to better connect them to the church’s global mission. Not only can service-oriented trips during academic breaks or vacations make them better Catholics and Christians, but it can teach them about social-justice issues and develop leadership skills in them, according to the document.

Many of today’s young adults are more mobile than previous generations, the document noted.

"Today many young adults spend longer periods in transition," according to the document. "Marriage is delayed; children come later in life; geographic and job mobility is high; and second and third careers are common."

The document noted that today’s young adults also feel a widening separation between those with access to resources and those who do not have such access because of poverty, lack of education and discrimination.

One local young adult who fits the description of a young adult trying to bridge the rich-poor gap is Leah Gacioch. She took her first mission trip in 2006 to Belize with the Rochester-based nonprofit InterVol, which redistributes excess medical supplies, organizes medical mission trips with local doctors and provides volunteers for educational mission trips.

Now Gacioch is the executive director of InterVol — at the tender age of 24 — and in the fall is planning to start her master’s degree in public health. She is a 2008 graduate of Colgate University and a parishioner of Church of the Transfiguration in Pittsford.

Gacioch said she was connected to InterVol through her father, a cardiologist who was close friends with several of the doctors who helped found organization. During her first mission trip, Gacioch traveled with the Friends Across Borders program to help provide school supplies and support for struggling schools. In Belize City, Gacioch and fellow volunteers worked to set up computer labs, educated Scouts and assisted medical professionals.

"It was definitely eye-opening," Gacioch said of her first mission trip.

Although she had traveled internationally prior to the mission trip, she said she had never seen anything like the poverty she encountered in Belize.

"I don’t think it (the trip) changed (my beliefs), but rather it reinforced my beliefs," Gacioch remarked.

Gacioch has taken several subsequent mission trips, and at the end of January had been due to participate in a mission trip to Haiti that was cancelled in the wake of the devastating earthquake there. Since then, however, InterVol and its partners, World Wide Village and the University of Notre Dame, have sent about 20 teams of doctors, nurses and technicians to Haiti. Gacioch said her organization hopes to transfer operation of the tent hospital they set up to Haitian officials during the mid-summer.

"With InterVol, we don’t come in as high and mighty Americans and take over," she said. "We have the attitude that we’re here to help you."

Just as one mission trip turned into several for Gacioch, Lupien said she also has been bitten by the travel bug. Following her Sri Lanka trip in 2006, Lupien went to Guatemala for four months in January 2009 to work for Safe Passage/Camino Seguro, which is a child-educational organization working in the Guatemala City garbage dump.

She intended to return in October 2009 to again work at Safe Passage, but the organization had to close due to safety issues, so Lupien spent two months brushing up on her Spanish and learning about Mayan culture. She returned in May to San Pedro la Laguna to work at Mesoamerican Permaculture Institute, which creates and teaches sustainable-agriculture methods. She said she is currently working to learn sustainable-agriculture practices so she can teach that type of farming in the region. She also is working to teach farmers how to limit fertilizer runoff to combat a bacteria problem in a lake that serves as a major water source.

"I have learned a lot about myself on these trips," Lupien said. "Specifically, how I cope in stressful and uncomfortable situations, how I interact with people of a different culture and about the strength I draw on which comes from God."

Lupien said she also has learned more about what it means to be Catholic, in part through the JustFaith program, where she learned about Catholic social teaching and Catholic’s call to global responsibility.

"I think my growing understanding of what it means to be Catholic is what drove me to the life I’m currently leading," she said.

Even though the JustFaith program started her on the path to learning about social justice, her firsthand encounters with social-justice issues have left an indelible impression.

"Seeing injustice firsthand is an experience that no book or video can give you," Lupien said. "Also, being in a community and learning from them about the situation is invaluable. I’ve gained many insights as to the root causes of injustices."

Lupien said her faith is one of the ways she copes with loneliness in a new locale. She said she keeps in contact with family and friends through e-mail and the social-networking site Facebook, which helps her to cope with loneliness during the first few weeks or months on location.

"I start out usually without knowing anyone," Lupien said. "That’s very hard, and you need to have a deep source of identity and faith to survive. I’m learning how to develop that with every trip."

She said she’s not sure when or if she will stop traveling.

"I try not to make too many plans because God always has other things in mind," Lupien said. "I try to keep myself free enough to go where I think I’m being called."

EDITOR’S NOTE: Both the Mesoamerican Permaculture Institute, www.permaculture.org/guatemala.html, and InterVol, www.intervol.org, need funds to continue and expand operations. For details on the institute, e-mail Lupien at mlupien@gmail.com, and for details on InterVol, call 585-922-5810 or e-mail info@intervol.org.