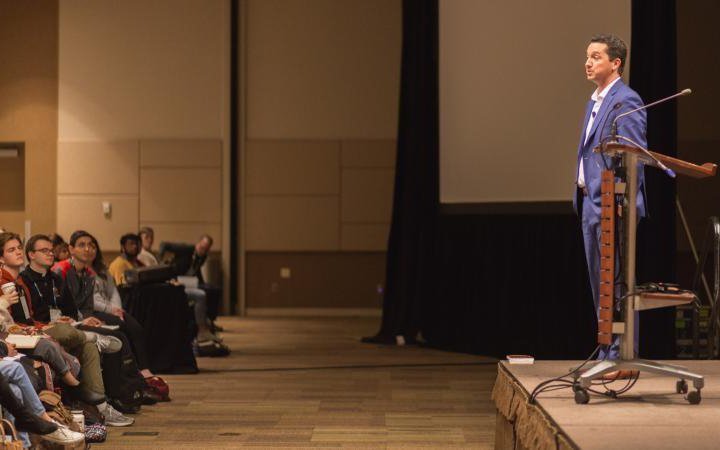 PHOENIX (CNS) — Alfonso Fraire, a student at Arizona State University, volunteers his time with youth ministry — and hopes to take back what he’s learned at the Student Leadership Summit sponsored by Fellowship of Catholic University Students to the young adult group at his home parish, St. Mary in Chandler.

Fraire said he is most eager to have deep conversations with people about brokenness.

Fraire has been joyfully overwhelmed during Mass, saying that the Catholic Church has an army of soldiers, especially an army of young people.

“We live in a culture that says God is dead to young people, but that couldn’t be further from the truth,” he told the Catholic Sun, newspaper of the Diocese of Phoenix. “Whoever said the church is dead needs to see this.”

Archbishop Christopher Pierre, apostolic nuncio to the United States, set the tone for the first full day at the summit Dec. 31, stressing in his homily at the Phoenix Convention Center to the “army of soldiers” in the assembly that the light of Jesus overcomes darkness and the crowd of participants were called to spread Christ’s light.

One of FOCUS’s first missionaries, John Zimmer, told the students that evangelization is like watching a good movie that we can’t wait to tell people about.

“Nobody is going to coach you on how to share a good movie with your friends. It comes naturally, and what we have in the Gospel message is far better than any movie,” said Zimmer.

Zimmer said evangelization is sharing life with people and coming into the messiness of their lives like Jesus did with the Apostles. We aren’t called to be “Jacuzzi Christians” who stay comfortable in our group of Christian friends. We’re called to get out of the Jacuzzi where it’s cold and uncomfortable.

“Every single one of you knows how to be a friend. That’s what it takes to share the Gospel,” said Zimmer.

Emily Wilson, an Arizona State graduate, offered practical tips students can implement if they don’t know their vocation in her Dec. 31 workshop session called: “When Will my Vocation Begin?”

Wilson encouraged attendees to look to Mary, who was always receiving love and graces from the Lord, for inspiration. She stressed that a time without knowing one’s vocation is not a time of waiting.

Those at the summit spent their last moments of 2019 with Catholic recording artist and Dove Award-winner Matt Maher — who began his music ministry at St. Timothy Parish in Mesa — singing songs of praise to the Lord and they spent their first moments of 2020 with Jesus in eucharistic adoration.

Bublitz writes for The Catholic Sun, newspaper of the Diocese of Phoenix.