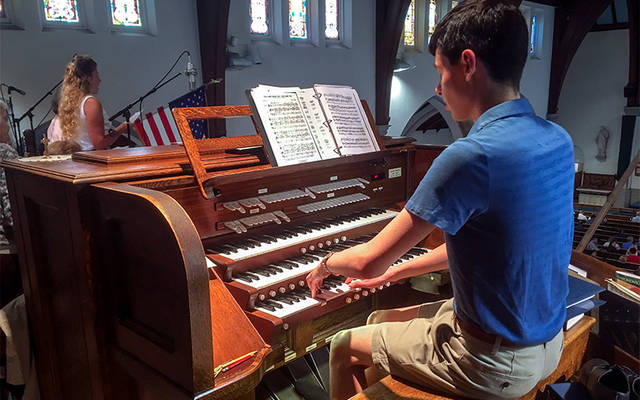 Very few 18-year-olds get paid to share their professional talents at Catholic parishes.

Yet that was the offer made to Chris Davenport back in October 2014, shortly into his freshman year at Ithaca College. He landed a part-time position leading the contemporary choir at Ithaca’s Immaculate Conception Church and ended up thriving in the role, eventually becoming organist for the parish’s traditional choir as well.

Now 22, Davenport recently ended his nearly four-year tenure at Immaculate Conception. Following college graduation on May 20, he moved back to his home town of Farmington, Conn., taking many fond memories from his parish experiences in Ithaca.

He recalled that he had hoped to obtain a church position locally while attending Ithaca College, since he was a music major with extensive public performing experience back home. Davenport has played the organ since middle school and was an organ scholar at the Cathedral of St. Joseph in Hartford, Conn.

An opportunity in Ithaca came up quickly: While representing the Ithaca College Catholic Community in a choir for the local Peace Festival held each September, he met Gary Vrabel, Immaculate Conception Parish’s music-ministry director, who told him about the contemporary-choir opening.

Davenport acknowledged that once hired, he found it rather daunting to be in charge of people who were all notably older than him.

“I wouldn’t say I got any strange looks, but I was a little bit scared of them, maybe. Once I was there a little while, then I lost that fear and became mean,” he said jokingly.

His so-called meanness was actually an emphatic effort to build up a choir that he said had been “a very small group, very informal” upon his becoming director. Davenport recruited additional members, established regular rehearsal times and began planning out more complicated and involved music, introducing many harmonies and encouraging the addition of several instruments.

In early 2016 Davenport was asked by Vrabel to also play organ for Immaculate Conception’s traditional choir, and he continued in those dual roles until graduation. They have since been filled by Emmanuel Berrido, who in May received his master’s degree in music from Ithaca College. The contemporary choir plays at Immaculate Conception’s 8:30 a.m. Sunday Mass, and the traditional choir at the 10:30 a.m. liturgy.

Beyond his work at Immaculate Conception, Davenport was involved in many other activities while in Ithaca. A music education major, he student-taught during the 2016-17 school year at the former Immaculate Conception School and during 2017-18 in the Watkins Glen Central School District. He also has been a substitute organist and pianist in many churches in both Ithaca and Connecticut; performed in concerts and master classes at college and in the Ithaca community; and played for a student theater ensemble and served as an accompanist at Ithaca College.

More recently, Davenport has taken on temporary organist positions in Connecticut. His goal for the immediate future is to land a permanent music job in his home state while concurrently pursuing a second bachelor’s degree, this time in computer science.

In Ithaca, Davenport’s influence at Immaculate Conception Parish will live on via the contemporary choir’s increased proficiency. In his farewell bulletin notice of June 3, Davenport noted his pleasure at the ensemble’s improvement, stating that it “has accomplished things that at the beginning of my tenure seemed impossible.” Davenport told the Catholic Courier that credit for this progress belongs chiefly with the choir members, not him.

“I’m not the one that has to go home and practice the music,” he remarked, adding, “They were great friends and also very dedicated musicians.”