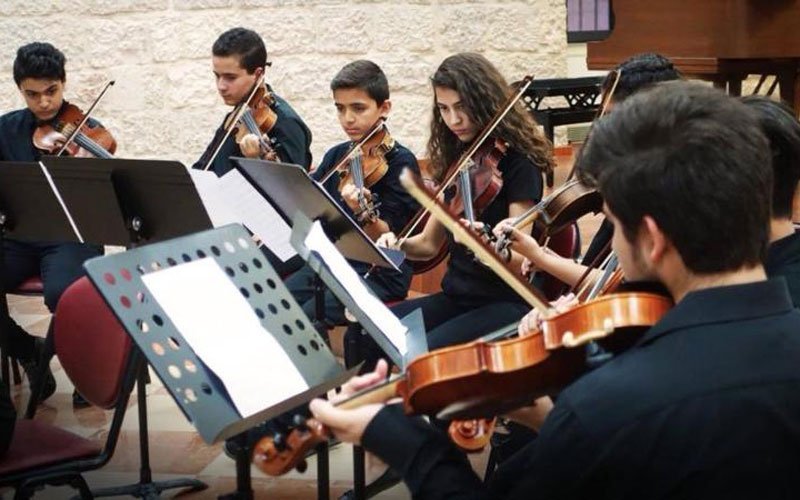 Members of the Franciscan-run Magnificat Institute Jerusalem perform in an undated photo. The group performed July 12-14 in such distinguished venues as the Basilica of the National Shrine of the Assumption of the Blessed Virgin Mary in Baltimore and the main church of the Franciscan Monastery of the Holy Land in Washington. (CNS photo courtesy Magnificat Institute Jerusalem)

WASHINGTON (CNS) — Eleven young musicians from Jerusalem and the West Bank had the opportunity to show U.S. audiences that music can be a bridge across cultural divides during a brief tour of the Washington-Baltimore area.

Performing July 12-14 in such distinguished venues as the Basilica of the National Shrine of the Assumption of the Blessed Virgin Mary in Baltimore and the main church of the Franciscan Monastery of the Holy Land in Washington, the group represented the Franciscan-run Magnificat Institute Jerusalem.

One of the students, violinist Majd Nasrawi, 16, welcomed the opportunity to be part of the group when her teacher invited her to make the U.S. trip — after checking with her parents first.

“It’s like almost a language,” Nasrawi said of the music she performs. “You can communicate with others without having to speak. You can express your feeling, happiness, sadness, anything. Music is special.”

For many, the institute is special as well.

Nasrawi is among more than 220 students at the institute, which opened in 1995 to offer young people of any background serious music education and study. Students range in age from 4 to 29. Some graduates have continued into professional careers as teachers and performers.

The institute, with 28 teachers, is operated by the Franciscan Custody of the Holy Land and is the only music school in Jerusalem’s Old City.

Franciscan Father Alberto Pari, 40, a native of Italy and the institute’s director since 2015, told Catholic News Service in an interview at the Franciscan Monastery of the Holy Land July 16 the institute serves to bring young Muslims, Christians and Jews together to foster understanding.

“For (the students) it is normal. They grow up together,” he said.

The school opened initially for Christians students, but soon Jewish and then Muslim parents approached school officials and the Franciscans began welcoming everyone.

“Usually we don’t ask who you are. Everybody is accepted like they are. We don’t put labels on anyone. Sometimes we don’t know who they are. I discovered a few months ago that one teacher who I thought sure was Christian was Muslim. Another one who I thought was a Jew was Christian,” Father Pari said.

Students attend music classes in the afternoon for four to five hours a day following morning classes in traditional academic subjects at their regular school.

Nasrawi, an Arab Christian, enjoys rehearsing and performing with her fellow students, whose religious backgrounds, she admitted, she doesn’t know.

“It’s doesn’t matter,” she said. “I realize in music you see people as humans and not anything else.”

The students were joined on the weeklong trip by two of their teachers, who guided the young musicians through rehearsals of 60 to 90 minutes daily before their U.S. performances. They also performed at the St. John Paul II National Shrine and the Museum of the Bible, both in Washington.

The trip served to inform U.S. audiences of the institute’s program as well as to help raise funds for the 23-year-old endeavor. Father Pari said the school continues to expand and that officials hope to construct a new building with up-to-date facilities once funding is secured.

Among the performers and teachers was Jamil Freij, 28, who is working toward a bachelor of arts in music through the institute’s academy for older students. He also works as the institute’s projects and marketing coordinator and is one of 28 teachers at the institute.

Freij, who is Arab and Catholic, has been involved with the school since he was 10, when he began lessons in voice and piano. He said music has been a part of his entire life through his father and a grandfather, both musicians.

“Music has been a refuge for me. It helps to heal and create this harmony in yourself first. And it helps create harmony with others. I reached a point where I decided in music you see people has humans, not anything else,” he told CNS.

It is through music that Freij hopes to build bridges of understanding among Palestinians and Israelis.

Nasrawi, too, sees music as a form of expression that can connect people and she said she looked forward to sharing her U.S. experience with her friends and classmates at Schmidt’s Girls College, an international German school for Christian and Muslim girls in East Jerusalem. She said she is the only Christian in many of her classes.

Such hopes are on what the school was founded, Father Pari said.

“The Franciscans,” he said, “are called to be a bridge of dialogue.”

Editor’s Note: More information on the Magnificat Institute Jerusalem is online at www.magnificat.custodia.org/en.