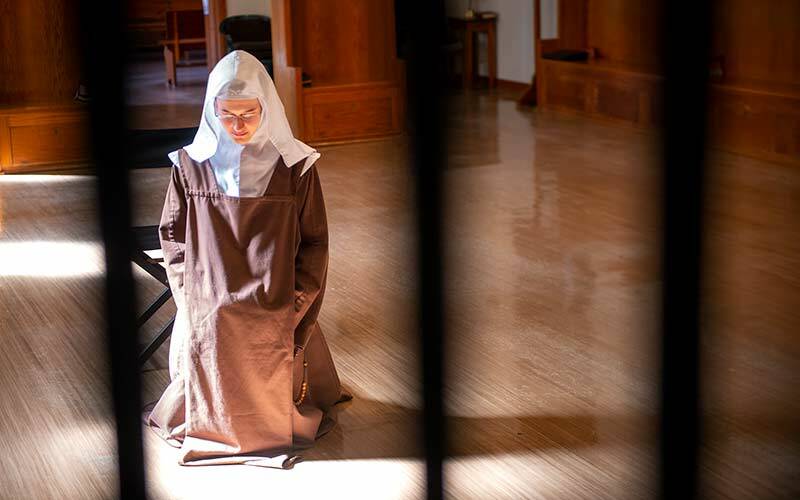 Sister Cecilia Therese of the Heart of Jesus is seen in prayer at the Carmelite Monastery in Pittsford. (Courier photo by Jeff Witherow)

PITTSFORD — Carmelite Sister Cecilia Therese of the Heart of Jesus was just a child when she first felt the stirrings of a call to religious life. The feeling was unsettling.

“I can remember just lying there in bed praying, having this sense that I was supposed to be a nun,” recalled Sister Cecilia, now 24. “At the moment it really scared me.”

Although the sense of being called to religious life grew stronger over time, Sister Cecilia at first tried to brush it off. At one point during her sophomore year of college, she was “secretly hoarding” informational brochures from various religious congregations.

“I had a drawer full of these things, but I was telling people, ‘No, I’m not discerning. I just really like nuns,’” she remarked.

When she finally acknowledged her calling a few months later, she found a peace that had been eluding her for years.

“I wish that I had the understanding from the beginning that God’s plan is always a plan of love. No matter what happens, if you’re genuinely, honestly trying to do his will, he will make sure you end up where you’re supposed to end up,” she said.

Sister Cecilia “ended up” at the Carmelite Monastery on Jefferson Road in Pittsford. There she is nearing the end of the first year of her novitiate or third step of the formation process for the Discalced Carmelites of Rochester. The order is cloistered and contemplative, meaning the Carmelites remain in the monastery and do not have such “outside apostolates” as teaching or nursing, according to Mother Paul Augustine, prioress.

“Our business is to pray for the church, the world, especially for our Holy Father, our bishops and our priests,” she explained.

The Carmelites devote much of each day to prayer and to the daily work of running the monastery. They welcome visitors for daily Mass and to submit prayer requests, but they only interact with visitors through grates that separate the monastery’s living areas from those open to the public.

Fostering a life of prayer

Such separation enables the sisters to focus on their mission, according to Sister Joseph Maria of the Trinity, who guides novices through their formation at the Pittsford monastery.

“It’s set up the way it is so that you foster prayer, a life of prayer and a life of communion with God. That’s the goal,” Sister Cecilia added.

Sister Cecilia’s formation as a Carmelite began during her junior year of college when, as an aspirant, she began spending time at the monastery, which also is called a “carmel.” Upon graduating from Christendom College in Virginia, she became a postulant, living at the carmel and learning more about contemplative, monastic life.

She became a novice June 7, 2021, receiving her habit and religious name. She expects to finish the novitiate and take temporary vows in June 2023, and permanent vows five years later.

Sister Cecilia’s lengthy discernment journey was rooted in a faith established in childhood. She grew up attending Mass at St. Patrick Parish in Victor and St. John of Rochester Parish in Fairport with her family, and her parents kept Sister Cecilia — whose former name was Emma Klein — and her siblings engaged in their faith by praying the rosary together as a family every Sunday and finding creative ways to experience Lent and Advent .

She said some of her initial hesitation to acknowledge her call to religious life likely arose from ignorance about the vocation. Although she’d had passing interactions with sisters at local parishes and knew many saints had been women religious, she didn’t really understand what the vocation entailed.

“My idea of what it really was, was vague and fuzzy,” she said. “I knew I was being called to something, but I didn’t know what it was.”

In high school, however, she attended a talk given by a nun who was so joyful and grace-filled that the teen could see herself following in the woman’s footsteps. Later on, Sister Cecilia had a number of college classmates who were openly discerning religious vocations, sometimes even leaving school early to enter convents, monasteries or seminaries.

After much internal debate, Sister Cecilia experienced “a moment of grace” during her sophomore year and told God she would become a nun if that’s what he wanted her to do.

“After that there was a lot more peace and joy. It wasn’t that he’s asking something and I really don’t want it. It was more like, I want this too,” Sister Cecilia said, noting that her first visit to a Carmelite monastery a while later was “one of the best days of my life. I stepped through the door and felt like I was home.”

“Profiles in Faith” highlights Catholics in the Diocese of Rochester of all ages and walks of life who are role models for living the faith. To suggest someone to profile, email Newsroom@Catholic Courier.com.