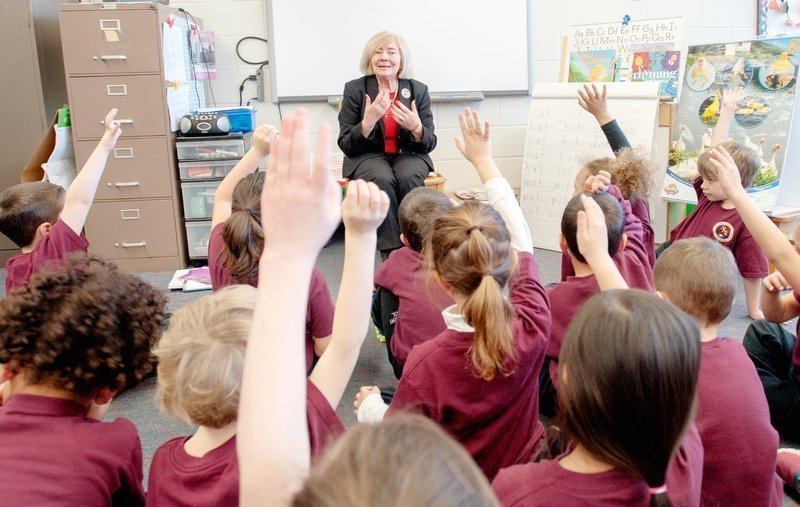 Grace Tillinghast asks questions of kindergartners during a Jan. 14 visit to Irondequoit’s St. Kateri School, where she teaches Spanish to kindergarten and first-grade students.

IRONDEQUOIT — Spanish is spoken all the time in Helene Coon’s kindergarten classroom at St. Kateri School even though her students only take language lessons once a week.

"At snack time, on their own, one of them will say, ‘Who has a manzana (apple)?’ And another will say, ‘I have uno o dos (one or two),’" Coon explained following her class’s morning session Jan. 14. With help from volunteer Grace Tillinghast, the class practiced counting to 10 and saying the names of fruits and animals in Spanish.

"Señora Grace is a gift to our school," Coon added. "When they are young, the students are like a sponge."

Tillinghast began teaching Spanish to St. Kateri kindergarten and first-graders in the fall of 2013. After having offered similar instruction at St. Pius Tenth School in Chili several years ago, she said she approached St. Kateri’s principal about doing the same there. At St. Kateri, her granddaughter and namesake, Gracie, is now in first grade, she said.

Her goal is to create a love for language at a young age, Tillinghast said. Younger learners "possess the capacity to develop near native-like pronunciation and intonation in a new language," according to research by the American Council of the Teaching of Foreign Languages at www.actfl.org/advocacy.

"There is much value in teaching one’s native language to the children," she added.

St. Kateri’s principal, Sister of St. Joseph Kay Lurz, agreed that the best time to teach children a second language is when they are young, so she readily accepted Tillinghast’s offer.

The language lessons aren’t new for Sister Lurz. When she was principal at Seton Catholic School in Brighton, a teacher taught French to seventh- and eighth-graders, she said. And currently, a retired physical education teacher and Basilian Father Warren Schmidt are teaching German and French, respectively, to St. Kateri students in afterschool clubs, Sister Lurz explained.

Sister Lurz said she supports Tillinghast’s plan to continue building on the children’s knowledge of Spanish by working with the first-grade students — whom she began teaching as kindergartners — through their fifth-grade year. She also will work with a new kindergarten group each year.

"The kids just love her," Sister Lurz added. "She’s just a beautiful person, generous … and she has that cultural background as well."

A native of Argentina, Tillinghast was a teacher at two high schools there before moving to the United States. She also taught at Keuka College before working at Eastman Kodak Co. for many years.

Tillinghast begins each lesson at St. Kateri with the Pledge of Allegiance in Spanish. She also has the children say the sign of the cross to start and end each session: En el nombre del Padre, del Hijo y del Espiritu Santo.

She also greets students one by one in the Spanish name that she has given each of them and asks how they are doing. Most respond, "Muy bien (very good)."

Kindergartner Shannon McElligott, 5, said learning her Spanish name, Juana, is one of her favorite parts of the weekly lesson.

"I like that we’re learning new things," she added.

During the Jan. 14 lesson with the kindergarten students in Coon’s class, the students sat in a circle around Tillinghast as she asked them about their homework. A few students raised their hands and said they learned their phone numbers.

In Nancy Wilson’s first-grade class, students volunteered to hold placards with addition equations as others guessed the answers in Spanish. Tillinghast also told them about what school is like in Argentina, since the next day was going to be "Intercultural Day" at school.

Boosting their global knowledge is another bonus of the lessons, added Sarah Mancini, whose son, Edward, is now in his second year learning Spanish with Tillinghast.

"That awareness that there are many, many different cultures, many different languages is a huge benefit for him as a 7-year-old child," she said. Any exposure we can give kids for language and languages other than English is a benefit to them. It exercises their brain and learning capacity and helps them increase their knowledge."

As someone who tried learning Spanish as a high-school student, Mancini said learning at her son’s age would have made the experience so much easier. Her son is constantly counting in Spanish at home as well as breaking out in Spanish words and songs.

The language is "definitely affecting him and he is retaining it," Mancini noted. "To have two years (of lessons), there is growth and it is nice to see that growth."

Tillinghast said she has heard similar feedback from other parents. The positive comments are affirmation for the labor of love that she will continue as long as she is able, she added.

"I love being with the children," Tillinghast said.